2.The structure of exhaust gas turbocharger

The structure of exhaust gas turbocharging system in diesel generator is shown in the figure. 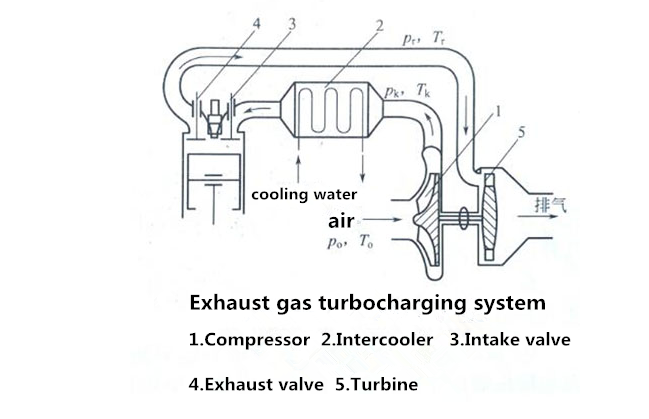 The exhaust gas turbocharger can be divided into two types according to the direction of the air flow entering the turbine: the axial flow type and the runoff type.

The structure of the runoff turbocharger is shown in the figure. 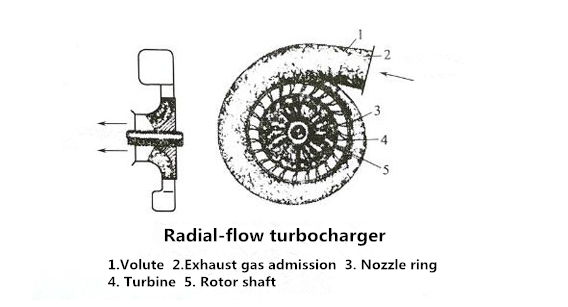 It mainly consists of volute, nozzle ring, turbine and rotor shaft etc. When runoff turbocharger works, the exhaust gas from the diesel engine enters the volute of the turbocharger and flows vertically along the axis of the turbocharger rotor shaft, the impeller is forced to change the flow direction along the deaf curved passage. Under the action of centrifugal force, the particles of air flow are projected to the N side of the blade, and the pressure increases while the relative velocity decreases; the relative velocity on the convex side of the blade increases while the pressure decreases.

According to whether the pulse energy of exhaust gas in exhaust pipe of diesel engine is used or not, the exhaust gas turbocharge can be divided into constant pressure type and pulse type.

The schematic diagram of the exhaust system of the pulse exhaust gas turbocharger is shown in the figure. 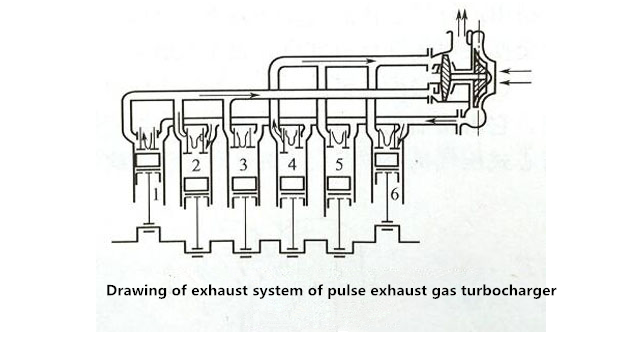 Take six-cylinder diesel engine as an example, the ignition sequence is 1-5-3-6-2-4, usually, the exhaust passage of 1,2,3 cylinders are connected to an exhaust manifold, along an inlet port on the volute to another half ring nozzle ring, so that this structure can make full use of the pulse energy of exhaust gas.