by Rudy P. SysAdmin at howtofindthemoney
WHY HYDROGEN?
Syngas derived from most high pressure gasification processes already contains a significant amount of hydrogen (H2), which can be increased through water gas shift (WGS) and be readily separated into a pure H2 product meeting industry product quality standards. There are several conventional H2 separation processes, but modern installations preferentially choose pressure swing adsorption (PSA), which is a well-proven technology offering high availability and low cost. PSA has the ability to produce high purity (99.9%) hydrogen at near feed pressure; however, relatively high H2 concentration in feed gases is required for its economics to remain favorable. New technologies are being developed to increase the efficiency and reduce the costs associated with H2 production from coal gasification.
Although most hydrogen is produced by steam reforming of natural gas (95% of world totals), hydrogen production or co-production from syngas generated by liquid or solid gasification is commercially practiced as well. This is mainly based on gasification of residuals, heavy oil or petcoke from refinery operations, with the hydrogen helping to satisfy the in-house demand for hydrotreating, hydrodesulfurization, hydrogenation, and hydrocracking. Many studies and demonstrations on producing H2 from coal have been completed, but there is currently no commercial coal gasification plant producing significant quantities of H2 as a final product. Even so, in the case of a number of large-scale ammonia and fertilizer-producing gasification plants in China, which is lacking low-cost sources of natural gas, coal is first converted to H2 before reacting with nitrogen to form ammonia.
In fact, any scenario in which high cost of natural gas would occur concurrently with low cost of coal, will provide impetus for production of hydrogen from coal feedstock. Moreover, H2 production technologies are gaining attention because hydrogen is predicted by some to be the energy carrier of the future, as it is extremely clean when reacted with oxygen (producing water) and has a high energy density by mass. Hydrogen can be used to feed fuel cells or combusted in a hydrogen turbine to generate electricity. Hydrogen could also power fuel cell vehicles. Although there are technical challenges to overcome, a clean coal gasifier to produce H2 would be a key component of a hydrogen economy and hydrogen-based power generation as envisioned.
HYDROGEN & SYNTHETIC NATURAL GAS FROM COAL
Production of gaseous fuels from coal or carbonaceous-fuel sources includes not only hydrogen (H2), but synthetic natural gas (SNG). SNG is equivalent to natural gas, which is mostly methane, and can be substituted for it in all the same natural gas applications.
Market
Hydrogen production is already a large industry, with most of the produced H2 used in refineries for hydrocracking—in which H2 is reacted with heavy petroleum products to form lighter, more useable hydrocarbons—and in the production of ammonia (for use as a fertilizer). In 2004, 50 million metric tons of H2 was produced globally. In recent years, the United States alone has been producing and consuming around 11 million metric tons. 95% of U.S. production was done at the site of use. In the United States for the year 2006, 65% of H2 was used by refineries, 21% for ammonia synthesis, and the remainder for methanol and other industrial applications. Worldwide, H2 is used more for ammonia production1 (57%) than refining (27%), with an additional 10% used for methanol production. As refining applications, such as the hydrocracking of heavy tar sands, increase, the near-term market for H2 is expected to grow. Hydrogen for use as a transportation fuel is still a long way off, with some models predicting slow growth starting in 2015, but H2 for other fuel cell applications, particularly electricity generation, may be more near-term. For more information on current and future hydrogen markets, consult the report from DOE's Argonne National Laboratory, located in the References/Further Reading section below.
SNG has a large potential market: essentially any application that currently uses natural gas could use SNG. In particular, gasification can be used on-site for industrial applications to produce SNG (and electricity, if necessary), allowing continued operation of natural gas equipment but from a coal source. The Department of Energy's Energy Information Administration (DOE/EIA) reports in the Annual Energy Outlook 2012 that in 2010, United States industrial use of natural gas was about 27% of the total domestic consumption, a significant fraction of total NG usage. A 2007 NETL study [ZIP] looked at the feasibility of on-site gasifiers in industrial facilities for the production of SNG and found that many industrial sites could benefit from the use of relatively small gasifier systems to produce SNG, power, H2, or syngas. For example, an interesting case to consider in this context is the glass industry. Currently the glass industry is heavily dependent on a reliable supply of natural gas as fuel to create process temperatures high enough to melt glass. This forces them to pay high premiums to utility companies to ensure a consistent supply of natural gas. An alternative would be to employ gasification to convert coal or some other fuel to produce SNG. The more stable price of coal could reduce fuel costs for the plant should natural gas prices rise to certain levels. The production of SNG would also allow for continued use of equipment designed to run on natural gas. For a detailed look at the economics of this gasification application, see Potential Application of Coal-Derived Fuel Gases for the Glass Industry: A Scoping Analysis [PDF].
Advantages
Coal is abundant domestically, with current estimates predicting over two centuries worth of consumption at present rates. SNG is able to substitute for natural gas, a scarcer and more volatile commodity than coal. In this way, gasification to SNG helps increase fuel diversity, protecting against an over-reliance on a single energy source. As SNG in use is identical to natural gas, the existing natural gas infrastructure can still be utilized. 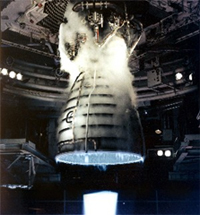 The combustion of hydrogen and oxygen produces a nearly invisible flame as seen in this photo of the Space Shuttle's main engine. The clean reaction generates only water and heat.  Photo courtesy of NASA.
When fuel cell technology matures for transportation or electricity, these same advantages in fuel diversity will apply towards gasification of coal-to-H2. A hydrogen-based transportation system would be extremely clean, with most emissions stemming from the production of the hydrogen itself. The actual generation of electricity using hydrogen fuel cells produces only water as a byproduct. Gasification has the potential to cleanly produce H2, using pre-combustion capture of harmful emissions.
Additionally, production of SNG and H2 is well-suited to co-generation within an integrated gasification combined cycle (IGCC) plant or other syngas application. Gasification plants could divert syngas from electricity generating turbines during off-peak periods to produce SNG or H2. The Great Plains Synfuels Plant, for example, diverts some syngas away from SNG production to produce ammonia during periods when the fertilizer is in high demand.
Similarly, refineries can benefit from the gasification of a variety of low-value fuels (refinery bottoms, biomass or solid waste, perhaps supplemented by coal) to produce various products required for plant operations. As noted above, hydrogen is used in large quantities for the hydrocracking of heavy hydrocarbons and other unit operations in petroleum refining. Electricity generated by a gasification system can offset utility costs for the refinery. And finally, excess steam produced by the system can be used throughout the facility in multiple unit operations demanding process steam.
Challenges
In a 2007 NETL study, potential industrial customers of coal-to-SNG gasification for onsite use in natural gas applications indicated that reliability (and hence, availability) is important and needs to be near 100%, either through increased performance or redundancy. Some applications are able to also fire oil, allowing for onsite storage of backup fuel. Availability is still a challenge for gasification, although some sites have achieved very high availability. The Great Plains Synfuels Plant, for example, has consistently produced 90 to 92% of its rated output capacity.
Producing SNG from coal is more expensive than the natural gas it would replace2. For this reason, the aforementioned 2007 NETL study focuses on locations and applications where the gasifier could be integrated with an industrial process that uses natural gas. This would help economics and would allow the facility to guard against fluctuating natural gas prices. Also, the most likely applications would possess well-developed coal transport infrastructure tied with access to both abundant and relatively inexpensive coal.
Another challenge to coal-to-H2 or SNG gasification is in transporting a gaseous fuel, which can be difficult because of the gases' low densities. SNG must be cooled and then compressed for transport through a close-to-capacity pipeline infrastructure. In addition, pipelines are restricted by geographical features like oceans, for example. Otherwise, it can be liquefied (called Liquefied Natural Gas or LNG) for transport by ships or tanker trucks.
Hydrogen is even more difficult to transport. In fact, even liquefied H2 is four times less dense than liquid gasoline and just to reach a liquid state it must be cryogenically cooled and greatly compressed. Current hydrogen-powered test vehicles store compressed hydrogen at 700 bar (over 10,000 psi; almost 700 times atmospheric pressure). Transporting H2 through pipelines is also difficult because of its low density and high flammability. Finding a way to economically store and transport hydrogen is a major challenge to deployment of H2 as a gaseous fuel.
The 10 largest coal producers and exporters in Indonesia:
Click Here! Top Clean Coal Contractors for Power Plant, Gasification, Liquefaction and Emission Control System
Source: US National Energy Technology Laboratory