Browse Articles  »  Technology  »  How to Maintain Cooling System of Diesel...

How to Maintain Cooling System of Diesel Generator Set

a. The genset with medium and high standard configuration adopts closed circulation liquid cooling mode with its own fan. The cooling system circulation loop basically consists of the following parts: water pump; waterway between the engine cylinder block and the cylinder head; thermostat; bypass pipe between the thermostat body and the water pump; water tank radiator; pipeline and hose; lubricating oil cooler.

b. Medium and high non-standard configuration genset, such as split water tank type unit, water tank radiator should be replaced by heat exchanger, while there are expansion tank and remote tank, such as the remote tank installation position is relatively high, the transition tank should be added, to prevent the heat exchanger from being damaged due to excessive internal pressure.

c. In addition, all medium and high generator sets can be separately equipped with coolant filtration device upon user’s request. The device has two functions: A, block all impurities in the coolant and prevent scale formation in the cooling system; B, improve the corrosion protection performance of the coolant.

d. All kinds of dirt on the radiator chip can greatly reduce the cooling performance of the radiator. Therefore, in a dusty environment, it is necessary to clean the radiator frequently. 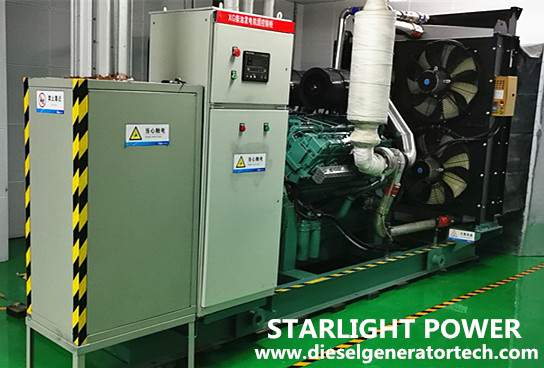 The gen set coolant has the following three functions:

B, prevents all metal materials in the cooling system from rusting;

The coolant can be composed of water and antifreeze or a mixture of water and rust preventive. Among them, the PH of water should be between 6.5 and 8, and pure water is usually recommended. Do not use water alone as coolant. In areas where there is a risk of freezing, the coolant should contain 40% to 60% antifreeze. When the antifreeze content is 40%, the freezing point can be reduced to -25°C. When the antifreeze content is 60%, it can be reduced  to -56°C. It is suggested that the users use a mixture of 50% antifreeze (ethylene glycol) and 50% purified water, and should be separately prepared in an  independent container, and then mixed evenly before adding to the water tank. It is not recommended to add more than 60% antifreeze to the coolant, otherwise it will reduce the antifreeze protection of the diesel generator set. It is recommended to use ethylene glycol as antifreeze.

Do not mix any type of antifreeze with rust preventive and other additives, as this will reduce the cooling efficiency by producing a large amount of foam. Antifreeze and anti-rust liquid are dangerous. Do not drink them. Avoid contact with skin and eyes. Do not use alcohol in the cooling system.

When using ambient temperature <5°C or long-term shutdown, must use the antifreeze approved by the engine manufacturer, add it according to the proportion, or drain the coolant. The discharge sequence is: cooling water tank →body → circulating water pump → (intercooler) → (water jacket preheater). Different models have different water discharge points.

The coolant should be replaced at least once every six months to avoid degradation of cooling performance due to precipitation in the cooling system. Another reason for replacing the coolant is to avoid the risk of corrosion of the generating set, as over time the rust will reduce the effectiveness of the additive and disable the water temperature sensor.

When replacing the coolant, the system should be flushed with clean water first. When cleaning, be sure to wait for the flushed water to be very clean.

The coolant should not be added until the diesel engine is shut down and completely cooled. Do not open the filler cap when the engine temperature is still high, except in an emergency. Otherwise steam or high temperature coolant may be ejected.

To add coolant to the tank, take note of the following:

A, before adding coolant to the cooling system, make sure that the drain cap is closed and the drain plug is in the correct position.

B, do not add coolant to the system too quickly to avoid bubble faults in the system.

C, air must be exhausted through a vent or through a filling hole. If the cooling system is connected to a heater, the heater control valve must be opened and the unit should be ventilated during injection.

D, when injecting the coolant, the liquid level should be 5 cm below the weld surface of the filler plug.

E, after the coolant is added, care should be taken to start and preheat the unit. Also check the coolant level and fill it up if necessary.

F, the same coolant contained in the original cooling system should be added to the water tank.

Cleaning the outside of the radiator

Remove the cover of the radiator, clean the radiator with water and a neutral detergent, and clean it with a soft brush. Be careful not to damage the radiator. Do not clean with a high pressure gun.