by Rudy P. SysAdmin at howtofindthemoney
Technologies for hydrogen (H2) production fall into three main categories:
1. Thermal Processes: Some thermal processes use the energy in various feedstocks (natural gas, coal, biomass, etc.) to release the H2 that is part of their molecular structure. Other thermal processes known as thermo-chemical processes use heat in combination with a closed chemical cycle to produce H2 from feedstocks such as water.
In addition to gasification, the main thermal process technology which is available for production of H2 is steam reformation of natural gas. It is a well established technology that produces about 95% of the H2 produced in the United States. Steam reforming involves the reaction of natural gas and steam over a nickel based catalyst. This breaks the methane component of the natural gas into carbon monoxide (CO) and H2 gas, similar to synthesis gas (syngas) produced via gasification. Then water-gas shift (WGS) is performed to increase the amount of H2 in the product gas as much as possible.
2. Electrolytic Processes: These processes use electricity to split water into its two chemical constituents, oxygen (O2) and H2, using an electrolyzer. The cost and efficiency of producing H2via electrolytic processes is directly dependent on the cost and efficiency of the electricity used in the process.
3. Photolytic Processes: These processes use light energy to also split water into H2 and O2. These processes are currently in the early stages of development and currently are not viable for large scale production.
Coal-to-Hydrogen Process Description
The U.S. Department of Energy (DOE) has sponsored many design studies on the production of H2 from coal, with or without the co-production of power.
Recent DOE studies presented the following four process design schemes as possible options for centralized-large-scale H2 production from coal, and discussed their performance and efficiency:
CO-PRODUCING H2 WITH CURRENT IGCC TECHNOLOGY
Figure 1 is a simplified block flow diagram for co-producing hydrogen (H2) in a current technology integrated gasification combined cycle (IGCC) power plant without carbon sequestration. Syngas from the slagging gasifier is cooled by generating high pressure (HP) steam in the high temperature gas cooling (HTGC) system before it is water quenched and scrubbed to remove fine particulates. The scrubbed syngas then goes through a sour shift process to further generate H2 by reacting carbon monoxide (CO) with steam. Depending on the desired amount of H2 to be produced, supplemental steam injection into the sour shift feed may be necessary. The syngas from sour shift is then cooled in low temperature gas cooling (LTGC) before mercury removal, and followed by hydrogen sulfide (H2S) removal in a single-stage acid gas removal (AGR) unit. Only a small portion of the carbon dioxide (CO2) that is co-absorbed with the H2S is removed in the AGR. Part of the sweet syngas from the AGR is routed through the pressure swing absorption (PSA) unit to recover a 99.9% purity H2 product. The remaining sweet syngas from AGR is bypassed to the gas turbine (GT) combustor as fuel for power production. After H2 removal, the residuals from the PSA unit consist of low pressure (LP) purge gas containing all of the CO and CO2, and 10 to 30% of the H2 in the original PSA feed. This LP purge is subsequently compressed and added to the GT combustor inlet fuel to increase turbine power output. Acid gas from the AGR unit is sent to the sulfur recovery unit (SRU) to recover sulfur as a byproduct. Sulfuric acid production can be used as an alternative to the SRU. 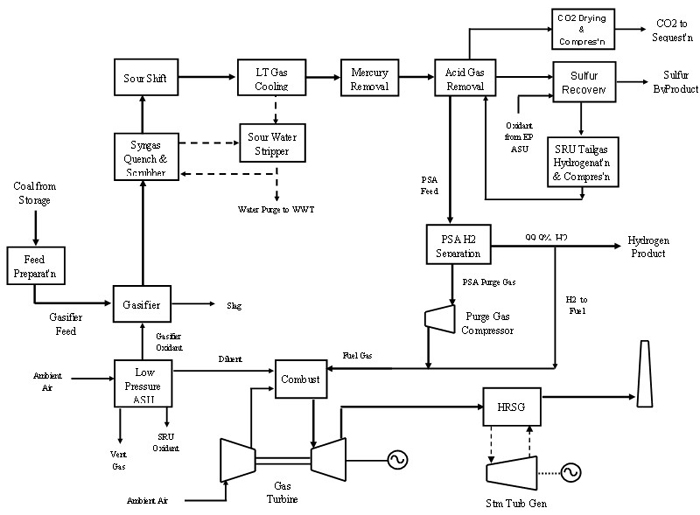 Figure 1: IGCC/Hydrogen Coproduction (With CO2 Sequestration) Block Flow Diagram
HYDROGEN PRODUCTION FROM COAL WITHOUT POWER EXPORT
In cases where the goal is to produce hydrogen (H2) from coal without power export, the overall flow arrangement can be further simplified. Figure 3 is a block flow diagram for producing H2 from coal with minimal power generation. Onsite power generation is kept to a level to meet internal consumption, and if necessary, some power can also be imported. Key differences from H2 co-production in integrated gasification combined cycle (IGCC) with carbon sequestration (Figure 1) are:

Figure 1: Coal-Based Hydrogen Production (Without Power Export) Block Flow Diagram
IGCC/H2 CO-PRODUCTION WITH WGCU AND ADVANCED WGS MEMBRANE
Figure 1 shows a block flow diagram of an integrated gasification combined cycle (IGCC)/hydrogen (H2) co-producing plant incorporating future technologies of warm gas clean-up (WGCU) and advanced metallic membranes capable of combined water gas shift (WGS) and H2 separation into a single operation, at elevated temperatures. With this process, syngas from the gasifier is cooled to 500-1000°F by generating high pressure (HP) steam in the high temperature gas cleanup (HTGC) system before going to the advanced WGCU system, where particulates, sulfur compounds and other trace contaminants are removed at elevated temperature. The cleaned syngas then goes through the advanced membrane system where WGS and H2 separation occurs simultaneously and continuously. The high pressure, hot, carbon-rich purge gas is burned with oxygen (oxy-combustion) in a combined cycle plant, to generate power and steam. Water is condensed out of the oxy-combustion exhaust to generate a nearly-pure carbon dioxide (CO2) product which is compressed and ready for sequestration. The bulk of the H2 product from the advanced membrane is exported to meet contractual demands. The balance is compressed and burned with air in the gas turbine of the combined cycle system to generate additional power to meet internal and export demands. The WGCU system directly converts the removed acid gas into sulfur to be exported as a byproduct. 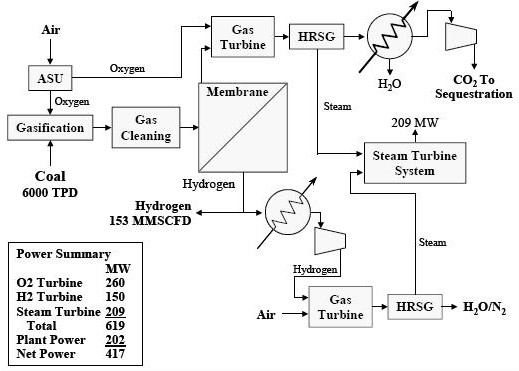