by Rudy P. SysAdmin at howtofindthemoney
High Temperature Syngas Cooling and Heat Recovery
Synthesis gas (syngas) leaving the reactor is at high temperature; typically 2,500°F to 2,800°F for an entrained-flow gasifier. Recovery of heat from the syngas is essential for attaining process efficiency. Heat recovery systems can reclaim a significant portion (5-25%) of the energy contained in the syngas in the form of latent and sensible heats, depending on the technology employed. The actual design of a syngas cooling and heat recovery system has to consider the characteristics of the coal feed, syngas produced, and the overall gasification process application.
The raw syngas leaving the gasifier can be cooled by a radiant and/or convective heat exchanger and/or by a direct quench system, wherein water or cool recycled gas is injected into the hot raw syngas. Then, the syngas typically passes through a series of heat exchangers for heat recovery at a lower temperature. In all cases, steam is produced for in-plant power generation or process heating. The steam and water systems are integrated and optimized within the overall gasification or polygeneration facility. 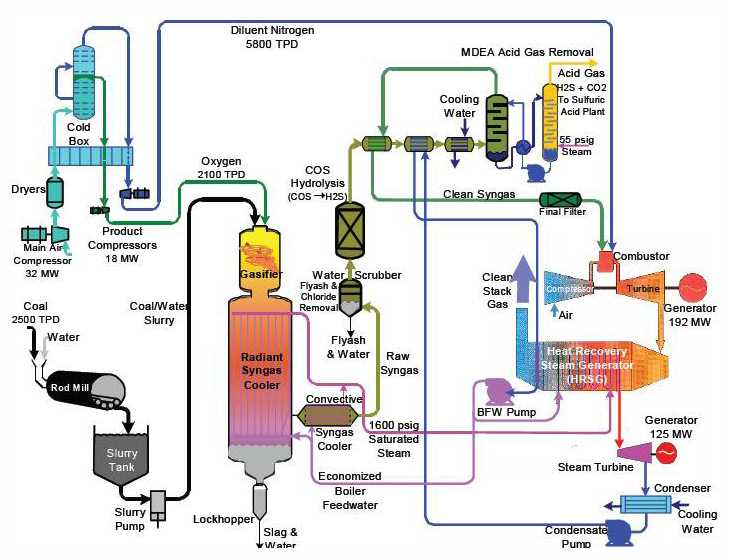 Tampa Electric Diagram
Typical Syngas Cooling and Heat Recovery Arrangement
A simplified process flow diagram of the 250-MW Tampa Electric IGCC plant is shown to illustrate its syngas cooling and heat recovery system. The plant was designed using both a radiant and a convective cooler for high temperature gas cooling (HTGC) and heat recovery. The syngas is first cooled in the high-temperature radiant heat exchanger, generating high pressure steam, which is sent to the power train. The syngas exiting the radiant cooler, at about 1,100°F, is further cooled in the convective cooler, generating a medium pressure steam. The syngas is then water scrubbed to remove the entrained fine particulates and soluble contaminants such as ammonia and chlorides, and finally cooled to the lower temperatures (~100°F) required for syngas cleanup by a low temperature gas cooling (LTGC) system, consisting of heat exchangers that generate low-pressure steam.
Radiant Syngas Cooler
A significant quantity of the sensible heat in the raw syngas can be recovered via a radiant syngas cooler (RSC) to improve the overall gasification plant thermal efficiency. An RSC is a large, expensive piece of equipment. It can be prone to fouling and difficult to clean. The slag entrained in the syngas can stick to the RSC and causes deterioration in heat transfer. Despite that, the Tampa Electric plant seems to achieve satisfactory operational reliability with its RSC.
The Tampa Electric plant GE gasifier uses a radiant cooler, which is designed as a ring of tubes connected together in a configuration called a waterwall. The hot syngas flows through the center of the waterwall, and high pressure (~1,650 psi) steam is generated inside the tubes from circulating boiler feedwater. At gasifier operating temperatures, heat is transferred primarily by radiation. The syngas exiting the center of the waterwall passes over the surface of a pool of water located at the bottom of the RSC, before exiting the gasifier/RSC vessel. The water pool collects and removes slag and fly-ash from the reactor system before the syngas is sent downstream.
The Shell and Siemens gasifiers use a different design for radiant syngas cooling, and have also demonstrated suitable operability. These gasifiers have a built-in membrane wall inside the reactor vessel covered with a relatively thin layer of refractory, as opposed to the thick brick refractory linings common to other gasifiers. Boiler feedwater is circulated to the membrane wall to keep it and the refractory layer cooled enough so that the refractory layer does not melt, and additionally so that during gasification, a slag layer solidifies/vitrifies on the refractory and protects it from erosion. Taken together, the solid slag layer and refractory provide enough insulation between the cooled membrane wall and reacting gasifier flows to enable molten slag to contact, wet, and run down the wall and be collected at the bottom of the gasifier. Feedwater passed through the membrane wall evaporates, generating saturated steam.
Convective Syngas Cooler
The syngas leaving the RSC, typically at 1,100°F, is routed to a convective syngas cooler (CSC) for additional heat recovery. For the Tampa plant, the CSC consists of a double pipe heat exchanger with gas flowing in the inner pipes. The annuli contain the circulating boiler feedwater so that either high and/or medium pressure steam can be generated. The gas leaves the CSC at a temperature between 700°F and 750°F. It is then sent onto the syngas scrubbers in the syngas cleanup section.
The 10 largest coal producers and exporters in Indonesia:
Click Here! Top Clean Coal Contractors for Power Plant, Gasification, Liquefaction and Emission Control System
Source: US National Energy Technology Laboratory