by Rudy P. SysAdmin at howtofindthemoney
Integrated Gasification Combined Cycle without Carbon Capture and Storage
Often, gasification and the application of gasification for power generation are spoken of synonymously. While gasification has many applications, power generation has received a lot of attention, especially in the United States as part of the Clean Coal Power Initiative. The most well-known design for this purpose is the integrated gasification combined cycle (IGCC). Similar to a natural gas combined cycle (NGCC), IGCC uses gas and steam turbines to generate electricity, but in this case the gas is synthesis gas (syngas; a mixture of primarily hydrogen [H2] and carbon monoxide [CO]) produced by the gasifier (see Gasifiers for more information). Potentially any carbon-based feedstock could be gasified, including such varied materials as oil refinery bottoms or petroleum coke, municipal waste, and biomass, but in practice coal is most common. IGCC-based electrical power generation is proven to be economical. In addition, cofiring coal with opportunity materials such as municipal waste and biomass feedstocks in this context may enable IGCC-based power generation to more quickly gain a foothold in the market if certain drivers develop as expected, including alternative fuels initiatives and more stringent greenhouse gas emissions limitation requirements.
Integration of the gasifier, gas turbine, and steam turbine (for reclaiming lost heat in the exhaust) allows for high efficiencies. In fact, current designs can rival the most advanced pulverized coal plants in efficiency, while research and development leading to technological advances in integration, turbine design, and supporting processes should increase IGCC efficiency even further. The following discussion provides an overview of other related information about IGCC, including market projections, advantages and challenges, research and development news, and more.
Market
Power generation from gasification is predicted to be one of the dominant markets for gasification technology with IGCC as the primary design. IGCC is an attractive technology that uses a stably priced and widely available resource—coal—while also increasing power generation diversity.
Coal-based power production is expected to remain the largest source of electricity generation in America's future, with some models (Annual Energy Outlook 2015, April 2015) predicting that the 39% of total U.S. generation coal had in 2013 will remain steady through 2024 with a gradual decrease to 34% in 2040. (Although nuclear power generation capacity is expected to remain fairly constant, significant gains are expected in generation capacities from natural gas and renewable fuels). As environmental restrictions become more stringent, significantly cleaner coal gasification technology can be a prime technology for the persistently important sector of coal-based power generation in the United States. (Coal-Based Integrated Coal Gasification Combined-Cycle: Market Penetration Recommendations and Strategies).
Advantages
IGCC plants benefit from the advantages of gasification technology, particularly environmental benefits, ease of carbon dioxide (CO2) capture, the ability to use a variety of feedstocks, and high efficiency relative to other power generation technologies.
For environmental protection from harmful compounds produced during power generation, pulverized coal (PC) and natural gas plants typically clean exhaust after combustion—after the exhaust has mixed with air and the controlled compounds are diluted. In general, the less concentrated the unwanted compounds, the more difficult they are to remove. In IGCC operation, however, syngas from the gasifier is cleaned before the gas turbines, when it is at high pressure and more concentrated. Particulate control is particularly stringent because of operational requirements for the gas turbine. This allows for cleaner operation than power generation by current PC combustion technology (and much cleaner operation than legacy coal plants). 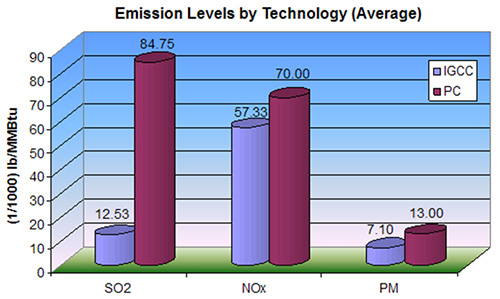 Average emissions comparison for sulfur dioxide (SO2), nitrogen oxides (NOx), and particulate matter (PM) between IGCC and pulverized coal (PC; super- and subcritical) power plants, without carbon capture. Data is from Cost and Performance Baseline for Fossil Energy Plants, Vol. 1, DOE/NETL-2010/1397, November 2010).
Concentrated CO2 in the syngas at high pressure makes CO2 capture easier in a gasification plant compared to removal from a dilute exhaust stream. As greenhouse gas regulations (involving CO2 capture and storage) are expected to figure in to future energy policy, gasification and IGCC will play a key role in carbon cap scenarios.
Chunk of CoalPowerlines
As mentioned above, feedstocks for gasification include most carbonaceous fuels such as coal of different ranks, as well as petroleum coke, refinery bottoms, biomass, waste, etc., but most IGCC applications have focused on high calorific-value coals for efficiency reasons. Circumstances, however, can change the economic balance; e.g. consider the case of solid waste. Waste gasification in IGCC frees up landfill space, can reclaim valuable materials, and generates electricity and useful byproducts. Gasifying a fraction of biomass with coal can generate electricity with a lower carbon dioxide emission impact as biomass is considered nearly carbon neutral.
IGCC, given its distinct differences from conventional coal-fired power plants, can be as or more efficient than PC power plants. IGCC plants are particularly well-suited to co-generation. An IGCC plant could produce power when electricity prices are high, but scale back power production and divert syngas to another product, like transportation fuels or chemicals, as profitability considerations dictate.
Challenges
Some important challenges to the wide-spread adoption of IGCC technology include cost, availability, and complexity. Cost is widely cited as the greatest barrier to IGCC acceptance. Capital costs for IGCC are high compared with alternative power plant designs, particularly NGCC, and financial viability is often dependent upon subsidies or tax credits. As a relatively new technology relative to PC and NGCC, development and design costs are much higher for IGCC. Availability also impacts operating costs and must be high enough to compete favorably with the conventional alternatives. The complexity of IGCC relative to older, more established plant designs also increases operating costs and can impact availability and the generation of capital for plant development. These challenges to gasification, with a focus towards IGCC, are discussed in the introductory discussion about gasification.
Research and Development
In order to improve capital and operating costs, availability, decrease plant complexity, and in general address the challenges described above, there are several avenues of research and development underway; R&D in the area of coal feeding, gasifiers and supporting systems, syngas cleaning, turbines, etc., all lead towards improving these aspects of IGCC performance.
The 10 largest coal producers and exporters in Indonesia:
Click Here! Top Clean Coal Contractors for Power Plant, Gasification, Liquefaction and Emission Control System
Source: US National Energy Technology Laboratory