by Rudy P. SysAdmin at howtofindthemoney
While Greta frets about global incineration and mass extinctions, the wind industry is doing a very fine job of extinguishing millions of birds and bats, every year. Indeed, entire species are under threat, including Europe’s Red Kite and Tasmania’s Wedge Tailed Eagle.
More generally, there’s a wave of avian carnage wherever the wind industry plies it subsidy-soaked trade; and offshore is no exception.
As Jason Endfield details below, the offshore wind industry is exacting a phenomenal toll on a whole range of seabirds in the waters surrounding Britain.
Isle Of Man Seabird Populations Plummet As Wind Farms Overwhelm The Irish Sea
Herring Gulls are down 82%, European Shag down 51%, Razorbills down 55%. The list goes on….
The Isle Of Man wildlife charity Manx Birdlife has reported a shocking 40% decline in the populations of many species of sea birds around the island’s coast. 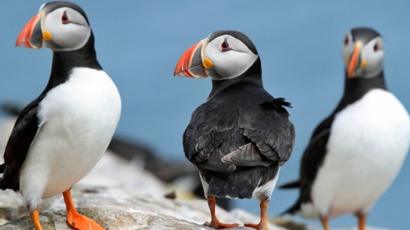 The worrying figures emerged following a comprehensive census that took place over two years. Whatever the reason for the sharp decline of the birds, it illustrates that something has gone very wrong.
I’ve noted with interest that this unprecedented drop in populations, of several of the island’s maritime species, coincides with the proliferation of wind farms in the Irish Sea – something which has worried me during the past few years, as I have witnessed the frenzied development of the wind industry in the waters off the western coasts of England and Wales.
World’s Biggest Offshore Wind Farm just a few miles away….
We know that offshore turbines kill birds and bats, though it is almost impossible to estimate the number of casualties because there are no retrievable carcasses to count at sea….
It is also highly likely that wind farms adversely affect many marine mammals.
The world’s largest offshore wind farm is now in operation off the Cumbrian coast at Walney, just 40 miles or so from the Isle of Man, and, with the news that nearby bird populations are in free-fall, we must seriously ask whether the huge turbines might be killing more birds than we ever anticipated.
The Isle of Man study was, ironically, partly supported by the Walney Extension Offshore Wind Farm Project. How paradoxical would it be to find that the project itself, with its giant 640 feet turbines, was responsible for the plummeting numbers of sea birds.
The report is full of depressing statistics. Herring Gulls are down 82%, European Shag down 51%, Razorbills down 55%. The list goes on.
Marine Protected Areas “may not necessarily be major barrier to new projects…”
I’ve been increasingly concerned at the feverish pace of industrial offshore wind farm development in this country and especially in the Irish Sea. Such a high density of turbines in a confined area – an area renowned for its wildlife – has been watched with dismay by many environmentalists, especially since large parts of the sea have been designated Marine Protected Areas (MPA’s), supposedly limiting the scale of industrial development in precious areas that provide important habitat for so many species.
Alas, development has been allowed in vast parts of the sea that fall just outside the protected zones – and there have even been hints that the MPA’s themselves may not be off limit for future wind farm expansion. Last year, a report carried out for the Welsh government suggested that “this protection may not necessarily be a major barrier to new projects” – which sounds shockingly irresponsible to me.
Isle of Man plans might seriously threaten birds’ survival
Though the Isle Of Man currently has none of its own offshore wind farms, their government is reportedly close to approving industrial wind development off the island’s coast as early as next year. Such plans might seriously threaten the survival of species already struggling to cope with the industrialisation of their habitat.
Wind energy companies might flaunt their green ideologies for all to see – but their industry nevertheless hides a grim reality. Their ‘green’ energy kills wildlife.
Money Vs Wildlife…
Speaking about the alarming drop in bird populations, managing director of Manx Birdlife, Neil Morris, suggested that “there are a number of causes for these declines and the solutions, such as protecting nesting sites, restoring food chains and mitigating climate change, will be challenging.”
It will be interesting to see whether more research will be carried out into just how many birds are being killed by the Irish Sea wind farms. My hunch is that many people would rather keep that information under their hats. So much money invested in offshore wind means that bad publicity would be very unwelcome and it is common for critics of the industry to be ridiculed.
​It seems likely that vast swathes of our coastal seas are likely to be further industrialised by the wind giants – even if it is at the expense of wildlife.
The 10 largest coal producers and exporters in Indonesia:
Click Here! Top Clean Coal Contractors for Power Plant, Gasification, Liquefaction and Emission Control System
Source: Stop These Things