Chaos! Wind Turbines Produce No Usable Power If the Wind is Too Slow and Infrequent

by Rudy P. SysAdmin at howtofindthemoney
Power consumption is a here and now kind of thing, so talk about wind power powering 100,000 homes is utter nonsense. To expose the lie, the inquisitive need only ask when, precisely? When will those 100,000 homes be powered in any meaningful sense by a power source that’s entirely dependent upon the vagaries of the weather?
For every MW of wind power capacity there has to be a MW of controllable, dispatchable conventional generation capacity ready to add its weight to the grid in an instant. The alternative is no power, at all. And that’s why no country has ever powered itself entirely on sunshine and breezes; and why no country ever will.
Jack DeWitt takes a look at some of the wind industry’s wilder claims about ‘powering’ the world, from an American perspective. 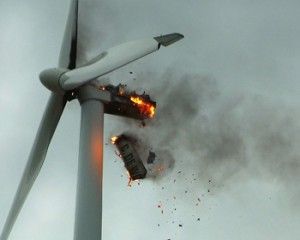