Browse Articles  »  Automotive  »  Why Hydrogen Power for Vehicles is Better Than...

Why Hydrogen Power for Vehicles is Better Than Battery-powered Electric Cars?

by Rudy P. SysAdmin at howtofindthemoney
The automobile industry is in the midst of a transition. A change from powering vehicles with the internal combustion engine to alternative methods is being driven by issues ranging from environmental concerns, fluctuating oil prices, and improvements in battery technology.
Just a few years ago, six alternative fuel sources for cars seemed viable: natural gas, propane, ethanol, biodiesel, hydrogen, and electricity. Out of those, hydrogen or fuel cell electric vehicles (FCEVs) and electricity have emerged as the most feasible methods.
Hydrogen is an abundant and accessible element in the environment, found in water (H2O), hydrocarbons, and other organic matter. It is a clean fuel, producing no harmful tailpipe emissions.
However, only a few major car manufacturers have been proponents of hydrogen fuel as the replacement for gasoline and diesel fuels. Ford has a program evaluating 30 Focus FCVs in several cities in the U.S., Canada, and Germany, and GM and BMW have built FCEV concept cars. But only the Hyundai NEXO, Honda Clarity Fuel Cell, and Toyota Mirai FCEVs are currently offered on the market.
There are several reasons why hydrogen power for vehicles is better than battery-powered electric cars. But can the technology catch up to and overtake the current EV momentum and become the power source of choice?
How Hydrogen And Electric Cars Work 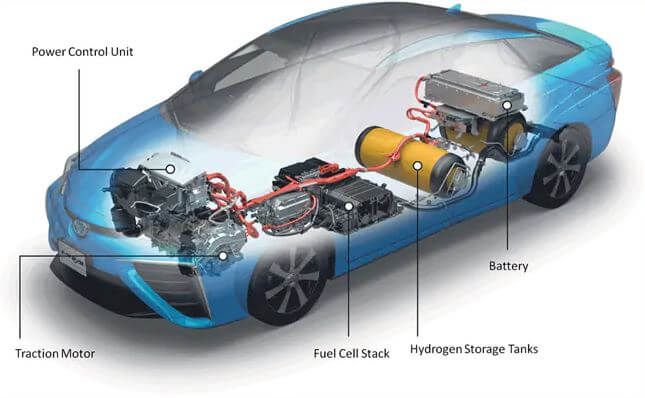 Diagram inside a car showing Via: Fuel Cell StoreVia: Fuel Cell Store
Fuel Cell Vehicles (FCVs) or Full Cell Electric Vehicles (FCEVs) use pressurized hydrogen gas held in a tank and a fuel cell to chemically fuse hydrogen with oxygen. The chemical reaction produces electricity, which is sent to an electric motor to propel the vehicle. The only by-product of the process is water (H2O) without any toxic tailpipe emissions. The water is so pure, humans (or animals) could drink it, although it lacks some of the minerals present in ordinary drinking water.
No batteries are required for an FCV. The fuel cells continue to produce electricity as long as they are supplied with hydrogen gas.
Electric vehicles, on the other hand, get their energy from a rechargeable battery or other portable sources of electricity (like a solar panel car). EVs use no chemical reaction but pull current from the charged batteries and send it to the electric motors. The batteries must be recharged on an EV, while a hydrogen vehicle requires filling the hydrogen tank.
Best Method To Get Hydrogen
Hydrogen is the most common element on earth, providing a virtually unlimited supply for Fuel Cell Electric Vehicles. However, it doesn’t exist in its pure form, so it needs to be produced out of compounds like water, natural gas, other fossil fuels.
Several methods are available for producing hydrogen. The two most common are electrolysis (water splitting) and natural gas reforming.
Electrolysis is an attractive method of obtaining hydrogen because its clean; the process produces no harmful emissions. However, it is a costly method, and only about 75% efficient. If the energy for the electrolysis process comes from a renewable source such as the wind or sun (instead of coal-powered, nuclear-powered, or other traditional energy source), a low carbon energy cycle can be achieved, which is more environmentally friendly.
The natural gas reforming method of obtaining hydrogen is much less expensive than electrolysis. The process involves creating a synthesis gas by reacting coal or biomass with steam and oxygen at a high temperature in a pressurized gasifier. Carbon dioxide and other impurities are extracted from the gas, leaving only pure hydrogen. However, the production of carbon dioxide and other harmful by-products contributes to global warming.
Hydrogen Fuel Stations VS EV Charging Stations
Hydrogen refueling has a distinct advantage over EV battery recharging. Typically, a vehicle hydrogen tank can be filled in just five to ten minutes.
Electric charging and battery technology have improved in recent years, but the recharge time is still slower. Tesla now has fast chargers that can restore a battery to 80% capacity in about 30 minutes. Other electric vehicles take much longer, such as the Nissan Leaf and BMW i3, which require four to eight hours for a full charge.
Hydrogen car technology, supply, and infrastructure still lag behind electric vehicles. As of March 2020, roughly 78,500 charging outlets and nearly 25,000 charging stations for plug-in electric vehicles (EVs) were available in the U.S. alone.
At the end of 2019, 432 hydrogen refueling stations were open worldwide, and only 330 are available to the public. Although the typical range of a hydrogen vehicle (300 miles) is greater than most electric cars (200 miles), many more refueling stations will be required to compete with the EV network.
Hydrogen-Power Superior To Electric-Power Vehicles With Limitations
Hydrogen technology for powering vehicles offers attractive features and some advantages over electric vehicle technology. Fuel cells generate electricity to drive electric motors with no harmful tailpipe emissions. An unlimited supply of hydrogen is available. Hydrogen refuel times are much shorter than electrical battery recharge times. The electrolysis process offers a clean but expensive method of producing hydrogen gas, while the natural gas reforming method is less costly but produces harmful by-products.
While these issues make hydrogen power superior to pure electric power, at least two drawbacks swing the pendulum back in the EV’s favor. The momentum achieved to date with the proliferation of electric vehicle recharging points will be difficult for hydrogen cars to overcome. Furthermore, in the near future, if electric vehicle lithium batteries are recycled or reused for other purposes, the EV will be a more sustainable solution than the hydrogen alternative.
The 10 largest coal producers and exporters in Indonesia:
Click Here! Top Clean Coal Contractors for Power Plant, Gasification, Liquefaction and Emission Control System
Source: HotCars