Browse Articles  »  Society & News  »  Why Coal is Still a Solution for Billions of...

Why Coal is Still a Solution for Billions of People?

by Rudy P. SysAdmin at howtofindthemoney
Over 600 million Africans are still without energy and electricity. The movie “Juice” brilliantly illustrates through visual representation how billions are without electricity; and without electricity and the energy from mainly fossil fuels, life returns to the Dark Ages.
Whereas liberal documentary filmmaker Michael Moore exposes the fallacy, human misery, and environmental degradation that occurs when towns, cities, counties, states, nations, or continents rely on renewable energy to electricity from wind turbines (enormous emitters of greenhouse gases) and solar panels; or destructive biomass is used for electrical generation.
Literally, life has no purpose, happiness, and meaning without electricity and sources of energy that are abundant, scalable, reliable, affordable, and flexible. That describes coal – but isn’t coal outdated, outlawed, and the worst form of energy possible? In fact, coal has always been, and is back at the forefront of what could save billions without hope, a future, and the key to environmental stewardship the west desperately craves. 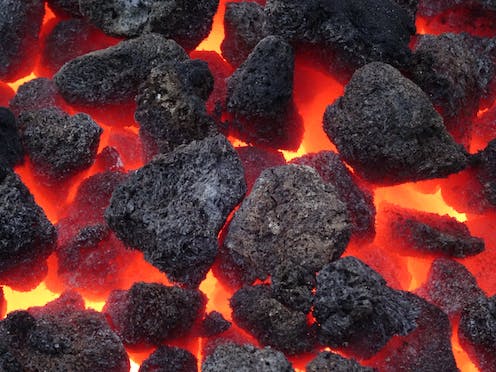 At this time there are approximately 1,600 coal-fired power plants being planned, permitted, or currently under construction. Hard to believe since this reliable source of electricity is under attack in western nations such as the U.S. and the entire European Union. Elsewhere coal is used more than ever. China, Japan, and India are using and building newer “high efficiency low emission (HELE), ultra-supercritical coal-fired power plants.”
HELE electricity-generating plants operate at higher than normal temperatures and increased efficiency. A HELE-plant additionally operates at emission and pollutant levels “45% lower than from existing coal-fired power plants.”
Official Indian energy policy is for coal to be its main energy source of electrical generation. Japan is working towards building 22 HELE plants to replace nuclear power after the Fukushima accident. China wants to build 300 HELE plants domestically and internationally.
Any Green New Deals, Paris Climate Agreements or excoriating of coal by the U.S. EPA are offset by Japan, India, China, and the EU, which is building twenty seven coal-fired plants to counter the energy to electricity dysfunction from overreliance on the wind and sun. The west led by the U.S. and EU are committing energy suicide when they refuse to embrace and regulate out of existence lower-emitting by up to forty-five percent, rich in energy density, and always firing 24/7/365, HELE coal-fired power plants.
Countries rich in coal, but unable to afford sophisticated and lower emitting, but expensive natural gas-fired power plants and billion(s) dollar(s) liquid natural gas terminals (LNG) could use coal to leave lives without fulfillment, and sophistication. The book The End of Doom describes in rich detail that poorer peoples, nations, and continents generally destroy their environments searching for basic necessities the U.S. and Europe take for granted.
MIT climate scientist Kerry Emanuel says:
“If you want to minimize carbon dioxide in the atmosphere in 2070 you might want to accelerate the burning of coal in India today (as an example). It doesn’t sound like it makes sense. Coal is terrible for carbon. But it’s by burning a lot of coal that they (India) make themselves wealthier, (similar to  America in the early 1900’s), and by making themselves wealthier (any poor region of the world) they have fewer children, and you don’t have as many people burning carbon, you might be better off in 2070. We shouldn’t be forced to choose between lifting people out of poverty and doing something for the climate.”
Billions without energy or electricity who are mainly using wood and cow dung, which are the worst emitting forms of energy, could be generating sustainable energy and electricity utilizing coal to save their local environments, and lives. HELE plants generate overwhelmingly more energy to electricity than renewables under current technological constraints. The main factor why is “HELE plants have a capacity factor of 86%, while wind has a capacity factor of 35%, and PV solar has a capacity factor of, at best, 22%.”
Counterintuitive for today’s energy wisdom, and climate change-nihilism, but coal can lead to cleaner air and healthier children and families. Climates changing are about more than the earth warming or not over mankind’s activities. We are living in the “Asian century,” and they need more energy, power, and electricity than at any point in mankind’s history that coal provides.
Aggressive climate change action that the U.S. Democratic Party and European Green parties advocate for are “egregiously misleading” when coal is demonized in favor of lowering human flourishing. The mantra of coal is death is unbelievably exaggerated when economic reality meets an environmental movement termed a “climate-industrial-complex.” Nowhere are the poor kept in the rotting pits of life more than when coal-fired power plants are not allowed to be built to the detriment of billions of Chinese, Africans, and Indians.  Soul crushing poverty the west can’t even imagine becomes the norm.
Multilateral development is then crushed when organizations such as the World Bank don’t allow the Asian century to flourish, or the second half of this century where Africa is likely to become the largest region in the world.
Asserting renewables and climate change mitigation programs bring “co-benefits” is false, a bold-faced lie, and justifies the worse kind of environmental racism. These bold souls in India, China, Africa, and elsewhere deserve the abundant, affordable, scalable, reliable, flexible, and energy dense life-giving qualities that coal brings globally. Coal can lay the foundation for prosperity that historically leads to clean landscapes, fresher air, and an all-around better earth for all.
The 10 largest coal producers and exporters in Indonesia:
Click Here! Top Clean Coal Contractors for Power Plant, Gasification, Liquefaction and Emission Control System
Source: Eurasia Review