by Rudy P. SysAdmin at howtofindthemoney
Sri Lanka’s President Gotabaya Rajapaksa had ordered the state-run Ceylon Electricity Board to quickly build a 300 Mega Watt coal power plant to help overcome a power crisis, Information Minister Bandula Gunewardene said.
“The cabinet paper says the President had ordered the Chairman of Ceylon Electricity Board to quickly enter into agreements to build the power plant in Puttalam to avoid an upcoming power crisis,” Minister Gunawardene said.
The Ceylon Electricity Board runs three 300MW coal plants in Puttalam.
The last approved long term generation plan estimated the cost of a third plant to be about 500 million US dollars with some changes to coal unloading facilities.
The fourth plant was planned to be commissioned by around 2023.
Sri Lanka’s existing plants are built by China. A memorandum of understanding has been signed China some time ago for an additional plant, according to industry sources.
It is not clear how the Chairman can initiate a contract, since the CEB is under strict procurement rules. However there is space for government-to-government deals to be made, though officials of the utility favour full or limited competitive bidding. 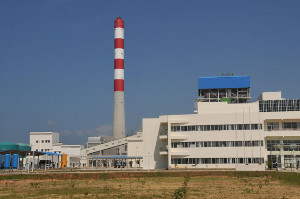 In a draft generation plan which has not been approved by the regulator high efficient coal plants are proposed which will cost more.
“In all new planned coal power projects, necessary environmental impact mitigation measures such as strict emission control, indoor coal storages and enclosed coal handling facilities are
incorporated along with higher conversion efficiency,” the draft plan said.
“Such mitigation measures are incorporated over and above what is required to meet current environmental laws of the country but at an additional capital cost of about 700USD per kW, compared to a conventional coal power plant.”
CEB is also considering, more efficient ‘super critical’ coal plants, which however may be larger.
The CEB is also pushing to set up a liquefied natural gas terminal to power new and proposed existing LNG plants.
Sri Lanka is heading for a power crisis as the last administration was unable to award a deal for a 300MW dual fuel plant,
Attempts were made to build ‘take-or-pay’ LNG plans instead of a separate terminal, leading to allegations of corruption. (Colombo/June06/2020)
The 10 largest coal producers and exporters in Indonesia:
Click Here! Top Clean Coal Contractors for Power Plant, Gasification, Liquefaction and Emission Control System
Source: Economy Next