by Rudy P. SysAdmin at howtofindthemoney
Poland opened its first coal mine since 1994 near the town of Jastrzebie Zdroj in south Poland on Wednesday. PM Mateusz Morawiecki, who attended the ceremony, said the new facility will build up the strength of the Polish industry.
The Bzie-Debina mine was built by Polish mining company JSW, the biggest producer of coking coal in the EU.
Morawiecki recalled that the EU had defined coking coal as a strategic resource.
"One should have a comprehensive view of the economy. We can't have a modern economy without steel, and we can't have steel without coking coal. If we want to promote renewable energy and boost the development of the automotive industry, we need to have very good quality steel," the head of government argued. 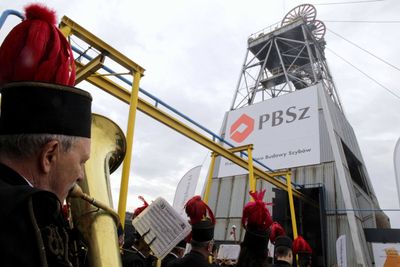 The mine is expected to start extraction of coking coal in 2022. Local deposits of the resource, which is indispensable in steel manufacturing, are estimated at some 180 mln tonnes.
JSW CEO Wlodzimierz Herezniak said that the company will invest more than PLN 3 bln (EUR 684 mln) in the new facility by 2030, including more than PLN 900 mln (EUR 205 mln) in 2019-2022. The first longwall will be operational in 2022, he added.
Energy Minister Krzysztof Tchorzewski said that over the past four years of the Law and Justice government, JSW has been transformed from a troubled company into a vigorous one.
The Bzie-Debina mine will reach full capacity in 2025, he added.
Currently, the mine has 223 employees but their number will grow to 300 by the end of the year and will reach the target headcount of 2,000 in a few years' time.
JSW produces more than 15 mln tonnes of coking and hard coal annually and plans to increase production to 18 tonnes by 2030, focusing on coking coal. Bzie-Debina's ultimate capacity is set at 2.2 mln tonnes of coal annually.
The 10 largest coal producers and exporters in Indonesia:
Click Here! Top Clean Coal Contractors for Power Plant, Gasification, Liquefaction and Emission Control System
Source: The First News