by Rudy P. SysAdmin at howtofindthemoney
Chemical looping combustion (CLC), an advanced coal power technology that could markedly simplify carbon capture at power plants, has moved significantly closer to commercialization, owing to a breakthrough in oxygen carrier durability, the National Energy Technology Laboratory (NETL) said.
The national laboratory, which is part of the U.S. Department of Energy (DOE), revealed on Sept. 26 that a NETL-developed oxygen carrier based on “low cost” minerals demonstrated “a ten-fold increase in durability compared to previous iterations.”
The accomplishment, it noted, is a “significant step toward the commercialization” of CLC, a technology it said is “capable of delivering affordable and dependable power to the nation while reducing environmental impacts due to CLC’s more streamlined carbon dioxide (CO2) capture capability.”

While it can also be applied to natural gas, CLC is generally viewed as a promising technology that could boost coal’s environmental profile as the industry puts more emphasis on decarbonization. But though several concepts are being researched around the world at bench and small-pilot scale, experts note the technology is still at a “theoretical stage.”
However, a July 2018 roadmap issued by the Electric Power Research Institute (EPRI) and the Carbon Utilization Research Council (CURC, an industry coalition focused on technology solutions to keep fossil fuels in a “balanced” U.S. power portfolio) envisions a first-of-a-kind commercial project using metal oxide and limestone-based CLC technologies starting in 2027. 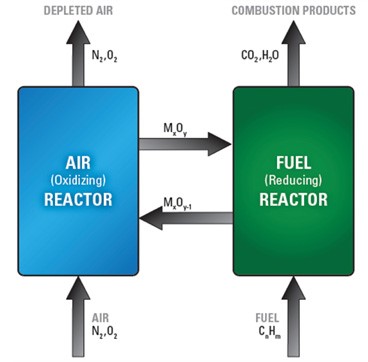