Good work is always rewarded – is a fact; especially for those who strive to make this world a better place. Amazingly, there is a tribe amongst us who despite the daily humdrums and busy schedules find a way to do something to uplift the society; for the will of doing it, not for the praise they would possibly earn. Similar is the idea behind NGOs too. NGOs are organised groups of like-minded people who come together to work and provide solutions and remedies for a particular concern or issue hampering the entire society. Their work ranges from human to environmental concerns, economy to technology, land to marine lives, and more. In India alone, there are more than 3.2 million registered NGOs working for different causes. Among them is The Akshaya Patra Foundation supporting the education of children by implementing the Mid-Day Meal Programme.

A little more about The Akshaya Patra Foundation

Akshaya Patra is one of the pioneer mid-day meal NGOs in India with the vision, ‘No child in India shall be deprived of education because of hunger.’ It has been providing nutritious lunch to children of Government schools and Government-aided schools since 2000. The Foundation has been recognised as the world’s largest NGO-run school lunch programme. It has also been recipient of several NGO awards both at national and international platform. This indeed boosts their motivation but the real inspiration comes from the children they serve. 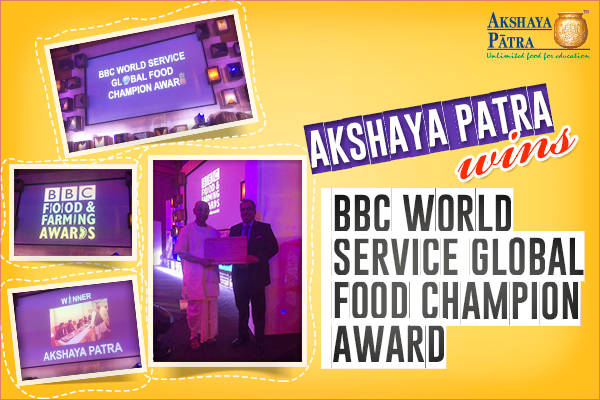 Children and their dreams - these are two most inspiring factors for Akshaya Patra. The Mid-Day Meal Programme beneficiaries hail from challenging socio-economic backgrounds. This meal acts as an incentive for them to attend school while also receiving the much-needed nutrition.

“I want to be a doctor and provide free treatment to people”, says Indu after seeing her grandmother unable to avail medical check-up due to high healthcare cost.

“I want to be a professional carrom player and give international recognition to this game”, says Navasa after discovering his passion for this game.

“I want to be an engineer because I believe engineering can resolve several gripping issues right from generating clean energy to creating support gadgets that can help people while driving”, says Santosha after witnessing the hardship his father undergoes as a bus driver.

… And there are MANY MORE SUCH DREAMS across India. Of all the budding dreams, Akshaya Patra currently nourishes 17,62,133 dreams. And that’s the reason this NGO strives to provide school meals regularly with the aim to bring more children under the ambit of the Mid-Day Meal Programme, in the near future.

The impact Akshaya Patra is creating across the country is not hidden any more. The Foundation has received several laurels in appreciation of its good governance, financial transparency, food safety and quality management, and the overall impact it has been creating for the past 18 years. Click here to view the awards and recognitions this NGO for children has children has received for its dedicated service.

Among the most recent Akshaya Patra awards is the Global Food Champion Award 2019 from BBC World Service. The Foundation received a spontaneous standing ovation from each and every one present at the event. This was the third edition of the Global Food Champion, recognising people or causes, which are contributing to the way the world produces, processes, consumes or thinks about food for the better. Among all the nominations, Akshaya Patra was a unanimous choice of the international panel of judges. The Iranian-American writer and chef, Ms Samin Nosrat, Head Judge of the panel said, "I am really moved by getting school lunches paid for in the States and so to see it being done on such a large scale and in such an incredible way by Akshaya Patra that was a really moving and powerful thing to see. There is nothing more important to me than getting children fed. Several studies have proven that this is fundamental."

NGO awards are a great way to compliment the good work several organisations are doing day in and day out. It sure boosts up the spirit of these organisations who do what they do for the well-being of the community.