Akshaya Patra – An NGO in India serving food for education!

When we hold a flipped coin within our palms, we can see only one side of the coin. And the visible side decides the winner of the toss. Similarly, when we look around us, we only see one side of India and conveniently ignore the other. But it’s about time we take a look on both the sides because that’s where the real solution for a progressed and developed nation is hidden!

Considered as the world’s largest democracy, today India is a rising economy and an emerging power. It has achieved several global laurels in almost all areas of sports, business, technology, and talent. At the same time, it is also struggling to keep up with indicators to ensure accessibility of food, health, and education for all. In a scenario like this, The Akshaya Patra Foundation, an NGO in India is relentlessly striving each day to counter ill health and illiteracy with wholesome food. 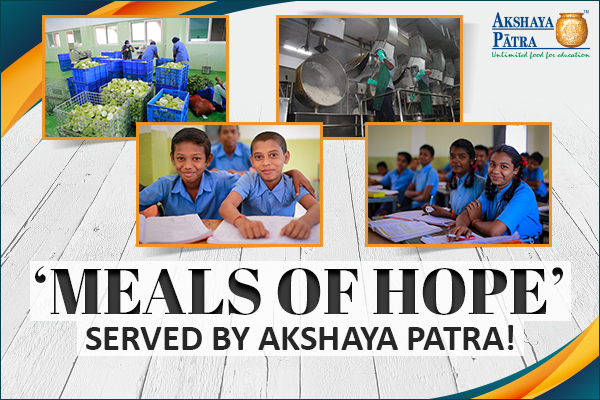 It is not an unknown occurrence that when hunger strikes even the fittest person fails to deliver his share of work. So, the question is, can we expect children to learn and perform in empty stomachs? This is where Akshaya Patra’s role become significant as it provides food for education. A large section of children in India has to constantly make a choice between work and school because hunger plays the spoiler. These children have aspirations alike any other children who are privileged to attend school without a second thought; but what amongst the former is lack of basic amenities. For such children, a free meal initiates their steps towards school.

As an NGO in India for children, Akshaya Patra is cognisant of the crucial role school meals play in schooling of children from challenging backgrounds. This meal not only fills up their stomachs but also nurtures their young minds with determination, confidence, and hope. By attending school regularly, children become ever more certain that their aspirations are achievable and that a much better and brighter future lies ahead of them. These meals support health and education of children empowering them to be resourceful and self-dependent citizens of the country.

It was in 2000 when Akshaya Patra first served food for education for 1,500 children in five schools of Bengaluru; and since then there has been no looking back. With strategic planning, operational efficiency, hygiene and cleanliness standards, and sustainable expansion, this NGO in India currently provides school meals to 17,65,597 children each school day in 12 states.

When you step in, wonders happen!

Charity is always appreciated and when it is about providing something as basic as food to a child, it becomes dearer. When you sponsor a child, you uphold their childhood; you convey to them, ‘there’s someone who cares’. Unless we take care of children right from the grass root level, it is impossible to achieve the status of a developed nation. Quoting Mother Teresa here, she said, “If you can't feed a hundred people, then feed just one.” Thus, if each one of us sponsor a child, then it is indeed possible to create a New India with an universal side – healthy, educated, and prosperous!