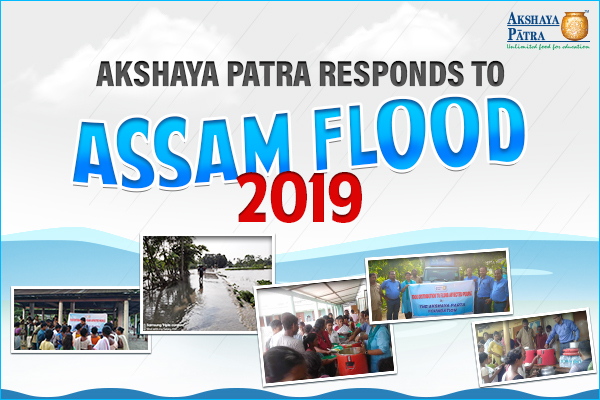 Assam has been hit by one of the worst floods in a decade leaving the entire state paralysed. The Government of Assam issued a red alert on 15 July 2019 as the situation worsened every passing hour. Nearly 1.5 lakh people have been provided shelter in relief camps operational across the state. In a grim situation like this, The Akshaya Patra Foundation, an NGO in Assam has stepped in to provide cooked meals to affected people in Kamrup district.

Akshaya Patra, a mid-day meal NGO has its kitchen in Guwahati, Assam. It begun its Guwahati flood relief activities from 17th July. The NGO is providing meals to affected people twice a day – lunch and dinner from its Guwahati kitchen. It began the relief operations by feeding 700 people in a relief camp in Athgaon area and now has extended its service to other relief camps in Kamrup district. So far, this NGO in Assam has already provided more than 22,000 meals. The Foundation is serving rice, vegetable pulao, kabuli chana, and mixed vegetable dal for lunch; and khichdi and labra sabji for dinner. In order to garner support from people, Akshaya Patra has started a campaign where one can contribute online donation in aid of Assam flood relief.

Past relief activities of Akshaya Patra

Be it within the borders of India or beyond, Akshaya Patra has always been proactive in responding to disaster situations. The NGO is always present to provide relief to crisis-hit people by providing cooked food. 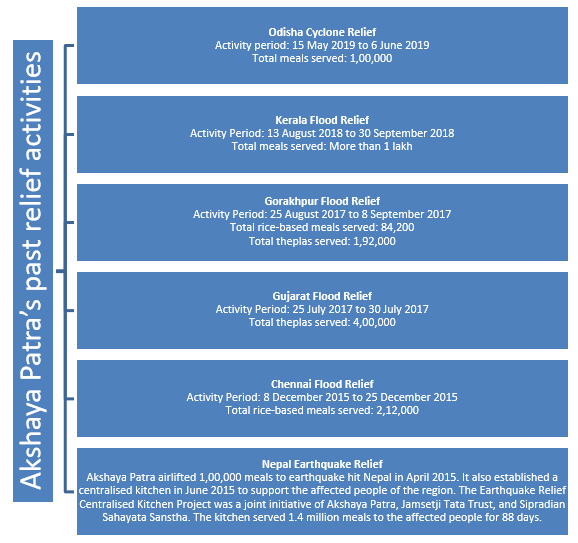