by Rudy P. SysAdmin at howtofindthemoney
While renewable energy generation continues to gain traction in the region, traditional power generation from sources such as coal will continue to have a crucial position in the broader energy mix amid soaring demand for power Massimo Gallizioli, GE steam, Steam turbine, Coal power, Cps, Nuclear, Waste to energy
Electric power supply industries worldwide are changing as concerns over climate change increase and regulatory systems adapt to take account of climate concerns. However, the world market for steam turbines seems set to remain resilient over the medium term, industry officials and analysts say.
They attribute this strength to a growing appetite for nuclear power plants across the Middle East and other regions, the need to quickly add capacities from heavy-fuel oil (HFO) in oil-rich markets like Iraq, and continued development of coal-fired generation in the Asia-Pacific region. In addition, an expected rebound in orders for combined-cycle gas turbine (CCGT) power stations will drive further demand for steam turbines.
"The market for steam turbines will remain significant, as turbines utilised exclusively in coal and nuclear power plants account for a higher proportion of the total steam turbine market," say analysts at Global Data, a UK-based analytics firm.
They forecast that steam turbines for coal-fired generation alone can be expected to account for 359.4GW of new installed capacity from 2019-25, only a 6% drop from 382.3GW over the previous six years. 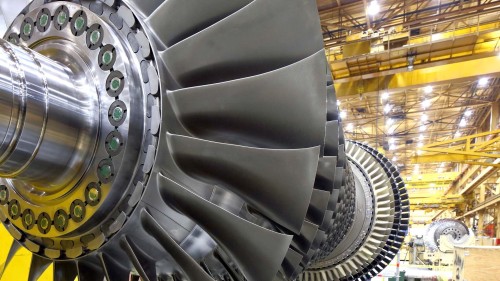 “While renewable power generation is being added to address concerns of climate change, for many countries coal, nuclear and HFO will continue to play a key role as reliable and affordable sources of energy”, says Massimo Gallizioli, CEO of GE Steam Power MENAT.
Looking at the coal example, he points out that, while coal-fired generation capacity has been markedly reduced in Europe and the US, it has continued to increase in Asia, and some countries in the Middle East like Pakistan or the UAE are adding coal to their energy mix for greater reliability and energy security.
"We estimate that thermal generation will still play a role in this part of the world for at least another 20 years, but the nature of the role will change”, says Massimo. “Clearly, today the thermal power generation is becoming a facilitator of renewable energy. We see less and less of thermal generation as a baseload, and more to flexibly sustain the grid balance by basically kicking in when the sun is not shining or when the wind is not blowing. Thermal power generation technology continues to evolve to play that new role. Today, both gas and coal power plants can deliver the flexibility that’s needed to balance intermittency.”
The issue of intermittency from solar and wind means that it is difficult to get reliable power from either, as it is weather dependent, which is unpredictable. Since energy storage is currently not efficient enough to be cost effective, this creates the need for dependable energy sources to supplement.
Fossil fuels automatically raise the emission question, particularly coal. Can coal still be a viable source of energy in times of global efforts to address climate change? “While we all wish for abundant power generation with zero environmental impact, this is not the reality today. For some countries the is no viable alternative to coal as a major energy source today. So if we continue using coal, we should do it in the best possible way, using modern technology to limit the environmental impact”, says Massimo.
Technology has much evolved over the past few years. GE’s ultra-supercritical (USC) technology is today’s standard bearer for coal power plants across the globe. Operating at temperatures and pressures above the critical point of its predecessors, ultra-supercrititcal coal plants are capable of generating power at a higher efficiency rate with significantly reduced CO2 emissions, as well as related operational costs.
“GE is already leading the way with this technology at various coal power plants around the world, including the Hassyan power plant currently under construction in Dubai”, says Massimo. “And we don’t stop here; GE is already working on the next generation of technology that we call Advanced USC. Integrating both mechanical and digital industrial platform capabilities, this technology is projected to heighten efficiency rates by an additional 1.5%, lessen emissions by another 3%, and adding approximately $50mn to its customers’ NPV (Net Present Value) through reduced operational and lifecycle costs.”
In addition, modern air quality control systems are available today that can reduce up to 99% of local pollutants such as, Particulate Matter (PM) Nitrogen Oxides (NOx) & Sulphur Oxides (SOx), bringing coal power plants on a level similar to gas.
Over the next 10 years, 25% of all future power capacity additions will be coal or oil-fired steam power plants, which is one driver of steam turbine demand. Another driver is the renaissance of nuclear power generation. “Nuclear is another technology that has strongly evolved”, explains Massimo. “Clearly, nuclear today is much safer than it was some years ago. As we are talking about climate change, nuclear has the unbeatable benefit that it is carbon-free, which means there are no CO2 emissions. What’s more, nuclear delivers very reliable and dependable electricity, so it adds to greater energy security.”
These clear benefits have led to a growing demand for nuclear in the Middle East and globally. The installed capacity of nuclear power plants is expected to increase by more than 140GW over the next 10 years, according to GE.
Countries in the Middle East have started to add nuclear to their energy mix. For example, Egypt is building the El Dabaa plant that will apply GE’s Arabelle nuclear steam turbine, the world’s largest turbine. Further countries embracing nuclear include Saudi Arabia and the UAE.
An interesting development is the trend towards small and medium reactors (SMR) that make the benefits of nuclear power generation accessible for more decentralised networks and even industrial applications. We may see more of these in the Middle East over the next couple of years.
Adding to the growing appetite for steam power generation in the Middle East are niche fuels such as Concentrated Solar Power (CSP) and Waste to Energy, that also use steam to generate electricity and hence will accelerate the demand for steam turbines in the region. Adding these new sources to the energy mix will again increase load variability.
“Load variability is becoming an everyday reality for many utilities. Economic challenges such as the cost of fuel are forcing operators of steam power plants to operate their units at lower loads more frequently and for extended periods,” says Massimo. With these ever-increasing pressures, reducing the use of costly support fuels that are required for start-up and low load flame stability has become even more important. Utilities require new technology to support these new operating models.
With modern technology being available today to meet these changing demands, there will also be a new future for steam turbines as power producers across the region and globally more and more adopt these technologies. Promising outlooks for technology providers like GE, that foresee the industry trends and offer the right technology to support the ever-changing energy ecosystem.
The 10 largest coal producers and exporters in Indonesia:
Click Here! Top Clean Coal Contractors for Power Plant, Gasification, Liquefaction and Emission Control System
Source: GE Steam Power