Browse Articles  »  Business  »  Demand for Coal Continues to Stable and Grow in...

Demand for Coal Continues to Stable and Grow in Asia Market

by Rudy P. SysAdmin at howtofindthemoney
The global economy has been going through a remarkable period of growth especially due to China’s open-door policy since the late seventies. Also, other major Asian economies have contributed to what some analysts believe will become the ‘Asian Century’. The region is about to sign the Regional Comprehensive Economic Partnership (RCEP) treaty which is the largest free trade agreement in the world comprising 3.5 billion people and a combined GDP of $22.6 trillion.
At the center lies Southeast Asia which is going through a rapid process of modernization and industrialization. The region is quickly becoming a manufacturing hub due to the low costs of labor and external factors such as the U.S.-China trade war. Two underlying factors of economic expansion are pushing energy consumption: a growing population and higher levels of welfare.
Some of the region's massive energy demand is met by wind and solar power. Until 2040 renewables will triple. Despite the dramatic drop in prices of wind turbines and photovoltaic cells, Southeast Asia is set for a much dirtier future than some were hoping for. Approximately 100 GW of coal-fired power plants is planned of which 30 GW is already under construction.
The region is a major market for coal producers due to the significant number of planned power plants. Asia in general accounts for 85 percent of the word's top 20 coal-producing countries of which Indonesia is the largest net exporter globally. However, the Asian country will be overtaken by Russia until 2040 due to rising domestic consumption, which will reduce exports.
Beijing has taken an interest in Southeast Asia’s energy requirements because of rising consumption and the need for investments. Although China is the world’s largest investor in renewables, the country is also a big exporter of coal-fired power plants. The China Development Bank and China Export-Import Bank last year invested $25.6 billion in energy projects abroad of which a big share went to coal-fired power plants in countries such as Indonesia, Vietnam, and Malaysia.
The IEA expects demand for coal in Southeast Asia to double to almost 400 million tons by 2040. Its estimate is 2.5 percent higher than two years ago. According to Keisuke Sadamori, the IEA’s director, “coal is rather resistant because it is affordable. It is really hard for Southeast Asian countries to move away from affordable coal immediately.” 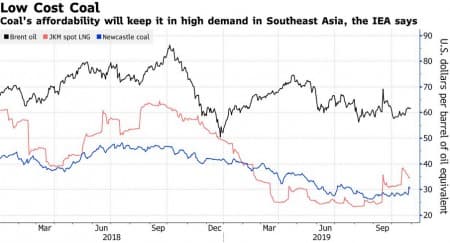 Although it is forecasted that renewables will be installed twice the rate of coal by 2040, the relatively low costs of coal strengthen the fuel's competitiveness. Also, its relative abundance across the region makes it a safe alternative for improving energy security. Countries such as Indonesia can rely on a steady and reliable flow of coal production not affected by external factors that could hamper transport.
Although the global narrative concerning coal is largely negative with dropping consumption in Europe and North America, coal’s revival in Asia is largely offsetting those declines. According to Wood Mackenzie's research associate Jacqueline Tao, "the reality of rising power demand and affordability issues in the region means that we will only start to see coal's declining power post-2030."
Also, much hinges on the regulatory environment of the concerning countries. Whether coal consumption will remain growing or alternative sources are promoted depends on the focus of governments. Currently, coal-generated power is subsidized which makes it an attractive source of electricity production. Also, tariffs on the import of wind turbines and solar panels in some countries hamper growth.
Geography is another factor that impedes the rapid integration of alternative sources of energy. The region's most populous country and consumer of energy, Indonesia, is the world's largest archipelago making infrastructure connectivity expensive. Large scale renewable projects benefit from a high level of integration to mitigate the problem of intermittency. Southeast Asia is not well situated to make use of interconnectors due to geographic and political reasons.
For the region to wean itself of polluting coal, governments need to install the right regulatory frameworks to attract the kind of investors that will propel these countries into the 21st century. Coal’s financial advantage is not indefinite as the rapid improvement of in competitiveness of renewables has shown.
The 10 largest coal producers and exporters in Indonesia:
Click Here! Top Clean Coal Contractors for Power Plant, Gasification, Liquefaction and Emission Control System
Source: Vanand Meliksetian for Oilprice.com