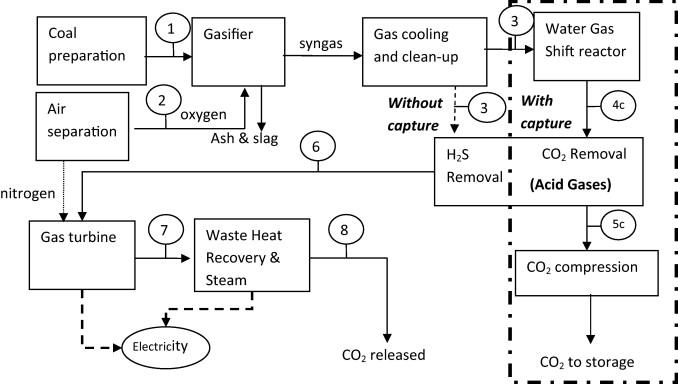 Warm Gas Cleanup
In any gasification process, the production of clean synthesis gas (syngas)—free of contaminants such as particulates, sulfur, ammonia, chlorides, mercury and other trace metals, and possibly carbon dioxide—is crucial to final product quality, to protecting downstream units such as gas turbines, catalytic reactors, and fuel cells, and to ensuring low environmental emission levels. Therefore, gas cleanup steps are indispensable, but do have a sizeable impact on plant economics, as they can account for a substantial portion of the overall capital cost and operational costs. Although raw syngas leaving the gasifier is at high temperature, conventional gas cleaning is typically carried out at low temperature by scrubbing the syngas using chemical or physical solvents (these require cooling the gas to typically below 100°F). The cooling equipment required, and the need to reheat the syngas before making use of it in a combustion turbine or synthesis reactor, result in economic and thermodynamic penalties that decrease the efficiency of a gasification plant. Accordingly, gas cleanup that would operate at higher temperature while still removing multiple contaminants would provide a significant efficiency improvement in gasification-based processes. This is behind DOE's interest in warm gas cleanup.
Challenges of High-Temperature Gas Cleanup
The extremely heterogeneous nature of coal and other carbonaceous feedstocks used to produce syngas by gasification presents a complex and technically challenging situation for any comprehensive syngas cleaning system. These challenges include:
The focus of most high temperature syngas cleanup has been the removal of particulates, sulfur, chloride, and alkalis, of which particulate removal  (via devices such as candle filters) and sulfur removal have been commercially demonstrated. Preliminary efforts of the so-called "hot gas" cleanup focused on a maximum operating temperature of about 1000°F so that the alkalis in the hot syngas could be condensed out on the particulates so as not to cause corrosion problems with downstream equipment. Substantial syngas cooling was still required. Although particulates, sulfur, and alkali compounds could be removed to very low levels, serious material durability problems were encountered. It was also difficult to remove the other contaminants, including ammonia, chlorides, and mercury. DOE recognized many of these issues and challenges, and the desire to overcome them by operating gas cleanup at a lower temperature of 700-800°F – so-called warm gas cleanup (WGCU) - to minimize equipment and material handling problems.
Sorbents for Trace Metals
WGCU technology tends to remove a significant portion of trace metal contaminants such as mercury along with the major gas contaminants (sulfur, etc.) found in syngas. However, even the diminished amounts of mercury and other trace metals in syngas following WGCU may exceed the amount permitted by the increasingly stringent regulations on emissions of these hazardous air pollutants. In conventional syngas cleanup systems operated at low temperatures, activated carbon is used for complete removal of trace species, but at the elevated temperatures of the WGCU conventional activated carbon cannot be utilized. Accordingly, alternative sorbents are required. Palladium-based sorbents are among the most promising candidates for the high-temperature, one-step capture or polishing to extremely low levels of trace elements from coal-derived fuel gases.
The 10 largest coal producers and exporters in Indonesia:
Click Here! Top Clean Coal Contractors for Power Plant, Gasification, Liquefaction and Emission Control System
Source: US National Energy Technology Laboratory