Browse Articles  »  Technology  »  What is the Impact on the Climate of...

What is the Impact on the Climate of Coal-to-Liquid?

by Rudy P. SysAdmin at howtofindthemoney
The rising costs of fuel, combined with the fact that the U.S. has larger reserves of coal than it does oil, have prompted an upsurge of interest  in the possibility of generating liquid fuels (such as gasoline and diesel) from coal in a process referred to as "coal-to-liquids (CTL)". Coal is heavily used for electricity generation, but transportation currently relies almost entirely on oil-based fuels.
Coal can either be directly liquefied through processes called hydrogenation or carbonization, or it can first be first turned into "syngas " and then re-liquefied into appropriate fuels. The largest commercial-scale CTL project in the world (by Sasol  in South Africa), uses the syngas method.  The only commerical-scale project in the US, the Dakota gasification plant  in North Dakota, produces large amounts of natural gas from coal.
While CTL technology is not new, large scale application of the technology faces significant financial difficulties, and comes with significant environmental costs. CTL plants are very expensive to build, use a large amount of water to run, and release high levels of carbon dioxide (CO2) into the atmosphere.
In addition to these direct concerns, an increase in the use of CTL fuels would fuel a vast increase in coal mining. It takes one ton  of coal to make two barrels of fuel. To replace 10% of US oil consumption with coal, using CTL, domestic coal mining would need to increase by 42% , an increase of 475 million tons per year. This dramatic boost in the scale of coal mining would bring with it fish and wildlife habitat destruction, and increased emissions of mercury, sulfur, methane, nitrous oxides, and CO2, among other environmental and health concerns
CO2 (carbon dioxide) emissions of CTL
Any use of coal, whether burning it for electricity, or creating liquid fuel, releases a number of pollutants into the atmosphere, including CO2. These CO2 emissions contribute to the problems of climate change, including increased storminess, droughts, and sea level rise. However, CO2 emissions from a CTL plant would most likely far exceed the emissions generated by creating the same amount of fuel from oil through the traditional refining process (see figure).
It is theoretically possible to prevent these carbon dioxide emissions through carbon capture and sequestration (CCS) technology. Manufacturing liquid fuels from coal allows for easier capture of carbon than simply burning coal, but this technology to capture CO2 emissions is not yet commercially viable, and faces major cost and feasibility hurdles. It's uncertain whether CCS will ever be a viable technology, and if commercial-scale CCS does become available, it won't be for a long time. 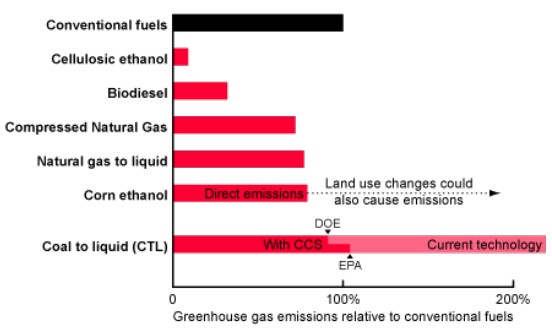 Also, preventing CO2 emissions from the fuel refining process does not address the problem of emissions from either generating the power to run the CTL plant or burning the resulting fuel. Therefore, the total CO2 pollution that would be created in the production and burning of coal-derived liquid fuels is much higher than for oil-based fuels. The coal-based fuels would still be more polluting even if commercial carbon capture technology was developed and used in the CTL plants (based on a 2007 EPA estimate) (see figure). Additional emissions would also be produced in the course of mining the coal.
A 2009 report 4.1 Mb  by the Department of Energy has updated some of these findings and suggests that CTL with CCS could produce fuels with slightly lower CO2 emissions than oil-based fuels. This could only be true if the as-yet-undeveloped CCS technology proves to be commercially feasible and is implemented.
Water Consumption of CTL
The CTL refinery process consumes vast quantities of water to keep machinery from overheating, 5 to 7 gallons of water  for every gallon of fuel produced. For example, the recently cancelled  22,000 barrel per day CTL plant at Malmstrom Air Force Base , Montana, would have consumed an estimated 1.7 billion gallons of water per year, enough to provide for 26,000 people. This scale of water use has potentially large impacts on a watershed, both through the depletion of existing rivers and through the outflow of large volumes of heated water.
Economics of CTL
A large (50,000 barrels per day) CTL plant is estimated to cost from $3.6-6.0 billion . These high expenses make companies hesitant to invest in the technology unless they can get guaranteed contracts to buy the fuel they produce. The US Air Force has expressed a serious interest in CTL  fuels, but is hampered by provision 526 in the 2007 Energy Bill  that prohibits all federal agencies from using any alternative fuel with larger lifecycle greenhouse gas emissions than traditional fossil fuels.
In addition, because no CTL plant has ever used CCS, there is no precedent for estimating true costs. It can take 8-9 years to build a large-scale CTL facility, during which time price changes in raw materials and pending carbon tax legislation may significantly increase costs. With the high costs of a CCS-equipped CTL facility (not even accounting for a carbon tax ), these fuels would only be economically feasible if the price of crude oil rises to more than $86 a barrel (estimated Jan 2009). And even then, it would be feasible only if coal prices do not rise along with oil prices. However, during the 2008 oil price surge, the cost of most types of coal rose steeply  as well.
CTL in Alaska
Because Alaska possesses large coal reserves and has relatively high fuel prices, there have been several recent proposals for CTL projects within the state. The most prominent of these are the proposed Fairbanks CTL project, the Beluga CTL project, the Healy CTL project, and the Tyonek CTL project. Furthermore, the US Defense Logistics Agency  is working on a pilot program  to solicit other projects that could provide CTL fuels to military bases throughout the state, assuming that CTL was determined to not run afoul of the 2007 Energy Bill restriction.  In Spring 2011 a Texas-based energy company expressed interest  in developing a CTL project somewhere in Cook Inlet.
Coal Liquefaction/Gasification Companies:
The 10 largest coal producers and exporters in Indonesia:
Click Here! Top Clean Coal Contractors for Power Plant, Gasification, Liquefaction and Emission Control System
Source: Ground Truth Trekking