by Rudy P. SysAdmin at howtofindthemoney
Major Commercial Examples of IGCC Plants
While there are many coal gasification plants in the world producing electricity, fuels, chemicals and/or steam, the following are seven notable, commercial-size IGCC plants for producing electricity from coal and/or coke.

Figure 1: Tampa Electric IGCC Process Flow
Figure 2 shows a simplified block flow diagram (BFD) illustrating the major process sub-systems included in an IGCC plant. The BFD shows an elevated-pressure (EP) air separation unit (ASU) integrated to the gas turbine (GT) operation by extracting some of the GT air compressor discharge as feed to reduce the ASU air compressor size and power consumption. The six operating IGCC plants cited, with the exception of the Wabash plant and Nakoso plant, all have EP ASU integration with the GT. The Buggenum and the Puertollano IGCC plants were designed with EP ASU/GT integration while the Tampa IGCC was modified in 2005 for EP ASU/GT integration; Edwardsport IGCC closely follows current Tampa IGCC design. Oxygen-depleted nitrogen from the EP ASU is compressed back to the GT as diluents for nitrogen oxide (NOx) control, and to maintain mass flow through the GT. Kemper County IGCC is to utilize air-blown transport gasification and Nakoso IGCC is also air-blown, and therefore do not incorporate an ASU.

Figure 2 : IGCC Block Flow Diagram
A more detailed process description of each of the processing units within an IGCC complex is presented in the discussion on IGCC process system sections.
* Closure of the 250 MW IGCC located in Buggenum, The Netherlands dictated by changing power market in the European Union.
Effect of CO2 Capture
The flow scheme of Figure 2 represents a typical process arrangement of a near-term commercial IGCC design without CO2 capture. CO2 capture and sequestration (CCS) significantly impacts the overall IGCC efficiency, and the effects are addressed in the discussion Designs for CO2 Capture.
Advanced IGCC
DOE’s R&D program is targeting advances in technologies that will improve upon the conventional IGCC technology discussed above. Cumulatively, the technology advances will produce electric power more efficiently and significantly lower the COE. An IGCC cycle including carbon capture that incorporates these advanced technologies is depicted in Figure 3. The impact of each technology on both process performance and cost are being evaluated, and by way of summary the following technological advances and their benefits are expected1: 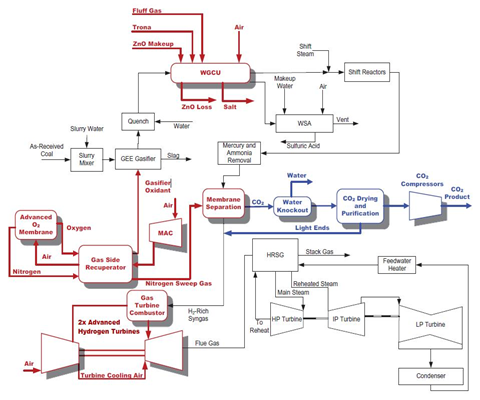 Figure 3 : Advanced IGCC Plant incorporating DOE/NETL-supported advanced technologies
Successful implementation and integration of all these advanced technologies allows for an estimated increase of 7.0 percentage points in efficiency, as shown in Figure 4. Coupled with increased availability and improved financing structure, a reduction of 28% in COE relative to the state-of-the-art carbon capture IGCC plant has also been estimated. 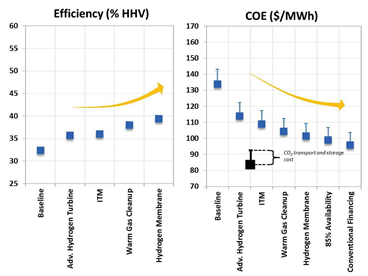