The Process of Producing Liquid Fuels From Coal

by Rudy P. SysAdmin at howtofindthemoney
Coal liquefaction is the process of producing liquid fuels from coal. Coal liquefaction is a means of addressing the many energy applications that are suited for consuming liquids. The technology entails heating coal, often with various reagents such as hydrogen, which produces a liquid. The technologies can be controversial since they often generate large volumes of waste. The liquefaction processes are classified as direct conversion to liquids processes and indirect conversion to liquids processes. Direct processes are carbonization and hydrogenation.
Direct Processes
The coal is ground so that it can be mixed into a coal derived recycle solvent to form a coal-oil slurry feed. The slurry containing 30-50% coal is then heated to about 450°C in a hydrogen atmosphere between 13 900-20 900 kPa pressure for about one hour.
A variety of catalysts are used to improve the rates of conversion to liquid products. One tonne of coal yields about one-half tonne of liquids. Processes have been developed to use coals from low rank lignites to high volatile bituminous coals. Higher-rank coals are less reactive and anthracites are essentially non-reactive.
The liquids produced have molecular structures similar to those found in aromatic compounds and need further upgrading to produce specification fuels such as gasoline and fuel oil.
Indirect Processes
Indirect liquefaction processes were developed in Germany at the same time as direct processes. In the early 1920s, Franz Fischer and Hans Tropsch patented a process to produce a mixture of alcohols, aldehydes, fatty acids and hydrocarbons known as synthol, from a synthesis gas of hydrogen and carbon monoxide.
The Fischer-Tropsch (F-T) process forms the basis for indirect liquefaction of coal. The process is indirect since the coal structure is completely broken down into synthesis gas by gasification with steam and oxygen. Then the synthesis gas is reacted over an appropriate F-T catalyst to form predominantly paraffinic liquid hydrocarbons having wide molecular weight.
This method was used to produce motor fuel during WWII and South Africa has used it to produce motor fuels and petrochemical feed stocks since the 1960s. The indirect route yields a large number of byproducts and overall has a lower thermal efficiency. 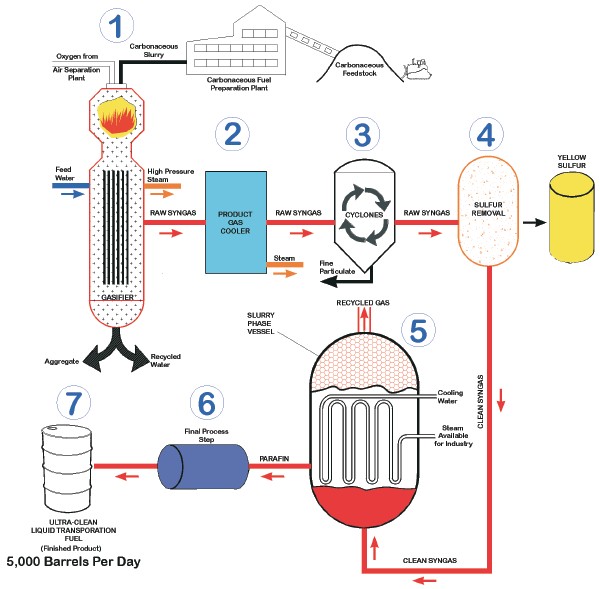