NorthEast for the Immersive Traveler 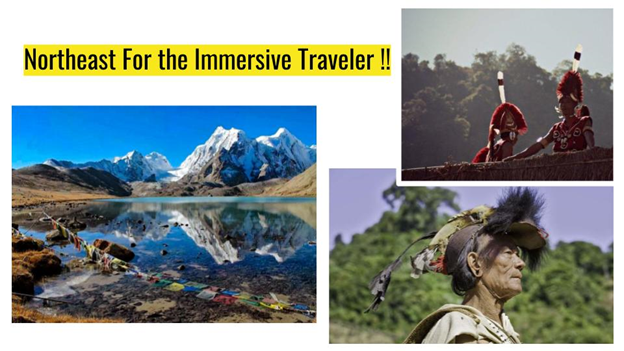 Recently I had the distinct pleasure of watching a webinar organized by the YouTube channel Digital India Learning in collaboration with the Indian tourism department about the North East travel and tourism, particularly Arunachal Pradesh, Nagaland, Sikkim, and some special travel tours. Even though it was a one-hour video, the traveller in me who has always been captivated by the North-Eastern part of the country thought to give it a go.  I intended to watch the first 10 minutes of the video and then move on to something else just like any typical Gen Z user, but it took a complete U-turn as I started watching the webinar. Not only was the session extremely captivating, but it opened an entirely new world of immersive travel for me. This post is about those questions that I would not even have thought before watching this session.

What is immersive travel?

Immersive travel, also known as experiential traveling, is a way of travel wherein you take that extra mile from being a spectator tourist to someone more involved. You stop being an outsider and start interacting with the local culture, traditions, cuisine, and people. In other words, you create a low impact tourism where your contribution to polluting the environment, sociocultural, and economy is minimal. This is also a branch of eco-tourism wherein the goal is to preserve our surroundings while traveling. Everything from wearing eco-conscious clothing to reducing the carbon footprint comes under this.

Why is North East India great for immersive travel?

The north-Eastern part of India, fondly called the Northeast is a largely unexplored travel destination which is a group of 8 states namely Arunachal Pradesh, Assam, Manipur, Meghalaya, Mizoram, Nagaland, Sikkim, and Tripura. These states are home to over 200 indigenous tribal communities who had migrated to India from Mongolia, Burma, China, and Tibet over centuries. In the age where people are running behind globalization and westernization, these are the group of native people who are still trying their best to hold their centuries-old culture and values close to their hearts. They crave the same exposure and developments but not by risking their way of living. That is why the tourism department of the states and the tribal communities have joined hands to promote immersive tourism wherein the travelers get to experience the wonderful culture and heritage of the communities without disturbing their system. They provide a wide range of activities that can be enjoyed by the explorers across the globe that visit them.

How can I travel immersively in Nagaland?

Nagaland is one of the Northeast states with eleven districts. The capital of the state is Kohima, where the Angami tribe is famous. The best time to visit Nagaland is just before the monsoon or just after the monsoon, so get your best waterproof jackets ready. Apart from the usual travel destinations, here I would like to shed light on the three most important things to do when in Nagaland, that revolve around immersive travel.

Dzukou Valley is a famous tourist destination near Kohima that has two trekking routes. Depending on your capability, you can either go for the 3.5 hours long hike or the 5 hours trek. The valley borders Assam and Nagaland and is a sight to behold after the rain. Blanketed by the beautiful Dzukou Lilies, you find yourself amid the mountains and greenery when you are there. As an immersive traveler, be sure to respect their ban on camping in the valley and single-use plastic. Remember, Nagas like most Northeast states respect nature so what we feel is irrelevant might be a big deal for them.

Hornbill festival is the flagship Naga event that brings together all the tribes in the Nagaland district to showcase their heritage and extravagant culture. Close to 25 mini festivals take place annually as part of the event. It is a ten-day event that is held every year from December 1 – December 10. This event usually brings the highest tourist footfall in Nagaland. There is no better way to understand the culture of the tribes better than being a part of this festival.

Heritage walks through the villages are one of the most sought-after activities in North-Eastern India. Kigwema is a small village near Kohima where the Kigwema tries to lead a peaceful life by preserving their culture and history. A guided walk through this village lets you taste a slice of their life which involves traditional activities, potteries, handicrafts, native dances, and of course an authentic spicy Naga meal(dal-chawal for the ones who are less adventurous).

The nearest airport is Dimapur which is approximately 66km from Kohima. Kohima is also reachable through train and road.

Since the travel involves being more in tune with nature and taking walks or hikes, try to bring your winter socks for trekking and good hiking shoes.

What do you do in Arunachal Pradesh?

Arunachal Pradesh is the largest state among the Northeast sisters which is home to 26 major tribes and is covered with a large area of forest and vegetation. Arunachal Pradesh offers a wide range of activities for the immersive traveler in you. Some of them are mentioned below.

Sangti Valley is one of the less-visited but largely underrated places in Arunachal Pradesh. Located in Dirang, close to Tawang, this place is spectacularly beautiful. This hidden gem in the lap of the Eastern Himalayas is blessed with several Buddhist trails and a couple of tribal communities. You can take a long walk or visit a Buddhist monastery or walk around to pluck some fruits around. If you are not into staying at the monasteries, many homestays cater to your needs. Camping is another popular activity in Sangti Valley.

Monpas are a popular tribal group in Arunachal Pradesh. The Monpa village is located close to Sangti Valley in Dirang. The ideal time to visit them is in February when they have their lunar new year celebrations, called the Losar Festival. The traditional Monpa dance showcased during this festival tells the Tibetan version of Ramayana. The dance goes on for up to 12 hours with the artists taking only 2 or 3 breaks. There is no better way to know the culture than to see their traditional art forms.

Arunachal Pradesh does not have an airport. The closest airport is in Tezpur, Assam. Arunachal Pradesh is best reached by railways or roadways. Guwahati is the city connecting the major Indian metro cities to the Northeast.

The best time to visit Arunachal Pradesh is during October – March. As it would be mostly snowing during this time, make sure you have packed clothes for the winter season and an extra blanket.

What is Sikkim famous for?

Sikkim is the smallest state in the Northeast which shares borders with Nepal, Bhutan, and Tibet. After Assam, Sikkim is the state with the largest number of tourists in the Northeast. The main reason is because of its picturesque landscapes and mind boggling mountains. The places look straight out of a postcard with the ice-capped mountain peaks, fresh and green meadows, and let us not forget the yaks wandering here and there. 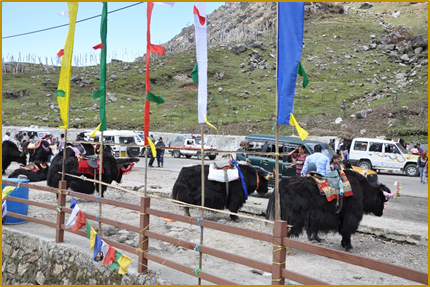 Sikkim has more than 1300 homestays which are extremely popular among the immersive travelers. This provides a holistic experience wherein the visitor gets to experience the regular Sikkim life and often gets a taste of the cultural and handicraft activities.

You will never find a place that is not visit-worthy in Sikkim. You can take a stroll through the off beaten paths and still you will find yourself with the beautiful meadows and wildflowers.

As shown in the picture to the left, the Dopka tribe of Sikkim is extremely fond of their Yak race which is held as part of their festival Dupka Tseshi.

You need additional permits to travel to the northern part of Sikkim. Sikkim does not have an airport of its own, the closest one is the Bagdogra airport in West Bengal. Sikkim is accessible through rail and road.

On the foot of the Himalayas, Sikkim is always cold. So, always have a warm base layer, preferably a merino wool thermal or a sustainable merino blend thermal like the one Kosha has introduced with merino wool and bamboo.

What are special interest tours?

You cannot be an immersive traveler without trying out the native cuisines, especially when the destination is a place like the North-Eastern states of India, who are famous for their authentic cuisines. The travel route for Meghalaya and Assam are especially promising to all the foodies out there. Their unique blend of leaves and herbs instead of oil especially leaves a mouthwatering aroma in the air. Many outdoor cooking workshops are being conducted by the natives as part of showcasing their culture. This allows you to not just learn from them but also let you cook something of your own with a twist. And you may not want to miss Darangiri in Assam which is Asia’s largest banana market.

Textiles in the Northeast is a women-centric market. It is one of the largest industries in the northeast with a concentration on weaving and looming. The interesting fact is that nothing is written down there, all the skills that the women acquire is by imitating their mothers. It is a tradition in the North East, especially Assam, and Manipur, for the mother and daughter to sit together and start doing embroidery and needlework. It is a bonding time for the mother and daughter. Travelers can participate in the clothing workshop, even design your costume by interacting with the textile workers. The textile looming and weaving factories in Imphal, Manipur is a vision for all the textile explorers.

If you want to virtually explore the North East states of India, like I did, you can watch the full video here.