by Lily B. Writer

National clothing in the UAE mainly reflects the life and religion of the Arab people. Moreover, the region’s climatic peculiarities are taken into account. The national apparel of the people, living on the Arabian Peninsula was designed to protect the body from the heat and direct sunrays. It is worth noting that the overwhelming majority of Emirates’ residents prefer national clothes – they have respect for their religious and traditional way of life.

Men in the Emirates wear a shirt, which is an elongated tunic with sleeves, most often of light colors. This shirt is seamless and has no fasteners. Regardless of the style of tailoring, this shirt emphasizes the desire for cleanliness and neatness as it is always perfectly ironed and clean.

Head shawl is used as a headdress, which also protects from burning sunrays. This shawl has shown its practicality already for centuries, as the Bedouins always use shawls, tied with a special braid around their heads, to preserve moisture and to protect them from hot air.

As for the womenfolk, most often they are dressed in spacious long dresses, sewn from silk or satin. Despite the popular belief, Arab women dress up in national dresses with pleasure. In addition, today many local designers offer unusual designs of the national clothes. With the help of car rental in Abu Dhabi Airport, you can drive from one store to another, admiring beautiful designer’s national dresses of UAE.

There are different types of national costume.

Men in Emirates wear a long white garment -"thawb". In winter, thawb can be of beige, sandy and even light greenish colors. On the head of Arab men you would see a koofiyad cotton cap, on top of which there is a "gutra" shawl (white, milk or red) tied in a special way, hold with a woolen braid. Sometimes on the garment of a local Arab man, you can see some kind of decoration-brush, comparable to a tie. For special occasions, such as weddings, big holidays or a visit to the sheikh, men use the cape "besht".

Under the thawb, men wear "therwal" - the undershirt, around the waist a belt is fastened.

During a day, a man can 3-4 times change clothes, so on the streets you will never see a man in a dirty or heavily crumpled garment. The wardrobe of a man usually consists of more than 50 garments. Of course, locals use dry cleaning services and rarely wash clothes at home, especially since dry cleaning in the UAE is very affordable. The most popular shoes for men are leather sandals. In the winter, you can see men in boots and even in sweaters worn over the thawb. Only during the trips abroad, men from the UAE can wear a suit or other European clothes.

The female outfit in the UAE is more multilayered. Traditionally, women wear colored dresses with long sleeves. Under the dress, they wear sirwal trousers. Above the dresses, a black cape "abaya" is worn, often embroidered with gold, silver, decorated with crystals or pearls. Often judging on the costly decorations and fabrics, one can see the welfare of a woman's husband.

The head of the Emirate woman is covered by a thin black shawl, which is covering the head, but not the face. This is the most common headdress in the Emirates. The headdress, called "hijab", is less often used by local women in the UAE, it is more often worn in the neighboring countries of the Persian Gulf. Hijab consists of two parts of cloth and covers the hair of a woman. Women from deeply traditional families (especially of Bedouin origin) can cover their heads with a so-called "burka". It can be of two kinds. The first is a handkerchief, covering the entire head and face, except the eyes. The second type of burka is a special construction made of metal plates covering part of the forehead, nose and lips. However, women in burka are rarely met in the UAE.

Another common headwear for women is "gishva". It is a thin translucent handkerchief covering the whole head and face. It is dense enough to hide a woman from extraneous views, but at the same time, it is transparent enough for the woman to view the world around her. Of course, the choice of a headdress depends on the kind of family the woman is from and how democratic is her husband.

Often, under the abaya, instead of a traditional dress, it can be quite a modern outfit from the famous European couturier. In addition, following world trends, women buy expensive bags and shoes of famous brands. People say that most dresses from high fashion shows go to the Emirates, where women demonstrate them to each other at weddings and women parties. In addition, in the UAE women traditionally use a large number of jewelry, which prices sometimes commensurate with the cost of a flat or a car. This is a kind of manifesto of man's generosity.

There are several versions of why Arab women are wearing black. According to one version, the woman is the shadow of a man, so she wears black. In some sources, it is said that black color best conceals the subtlety of a woman's shape, and would not become transparent if it gets wet. 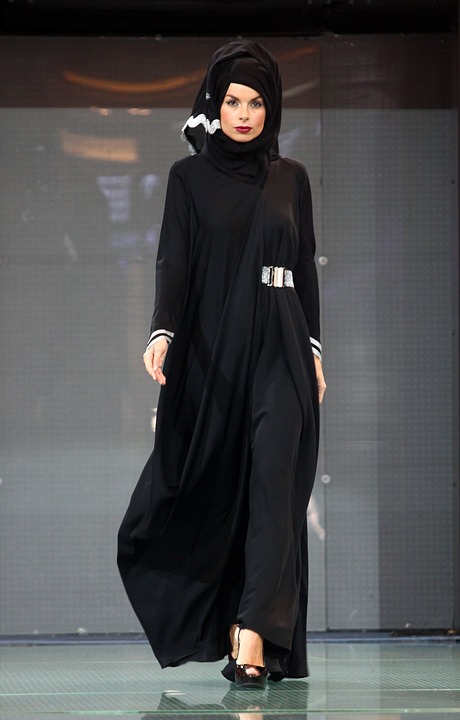 According to another version, the white color is for the work, and the black color is festive. It means that since Emirates’ women do not work, they always have a holiday. In addition, it is believed that the black color of Oriental people is associated with beauty: black eyes symbolize a beloved woman and a black heart is a loving heart. It is unusual enough, but the color of mourning for Arab women is blue.