Browse Articles  »  Health & Medical  »  How Hard is it to Quit Smoking?

How Hard is it to Quit Smoking?

by Cindy Bolley HHCTB?
Without a doubt the hardest thing I ever did was to
Quit Smoking.
I started smoking when I was 16. I thought it made me
look older and much more mature
People always commented that I looked so angelic that
I didn't look like a smoker. I always snickered at that because
I was not only a smoker but I could drink like a fish and swear
like a sailor. I guess I still do 2 of those.
I had tried to quit a few times but I really didn't want to. I think that
is the key to quitting, "YOU" really have to want to quit. Your not doing
this for someone else you are doing it because "You" want to.
When I married my husband he really didn't want a smoker and I
always wanted a guy with hair on his chest. Neither of us got what we
wanted with that criteria. We were living in Dayton at the time and an ad
for "Smoker-Ender" came on the TV. They were offering a seminar about their
program to quit smoking. They encouraged us to bring our cigarettes and listen.
So I thought what the heck, it was my favorite word, "free".
As we all gathered and the meeting was underway there were some speakers
that told us about the program and how it worked. They said their job was not
to explain how bad cigarette smoking was for us we were all adults and we
should know that part.
Then a tiny gal got up to speak. I remember her being so bubbly and petite
but her message was very powerful. She told us about living in the country with 3
small children. A blinding blizzard snow was starting and the prediction was
that it would be a bad one. She checked the fridge and there was some milk, not much.
But it would do because she really didn't want to pack up the 3 kids and venture out
in that snow storm. The bread situation was about the same, not much but it would have
to do.

She then sat down to relax with a cup of tea and a cigarette.....
it was then that she realized that she only had a half a pack, and that was NOT
enough to get her through that blinding blizzard snow storm. So she bundled up
her 3 small children and drove through the snow storm for cigarettes. She didn't care
that the milk and the bread were low, but the thought of no cigarettes was to much.

Take a moment to form a picture of that situation in your mind.

The addiction to cigarettes being so strong that it would make a rational person
(staying home with the kids in bad weather) to over powering them into thinking it
was necessary to brave the terrible blizzard with 3 small kids in tow.
After the meeting I found the tiny, petite, powerful storyteller. I shook her hand and
told her I was not going to be signing up for her program that she was offering.
I didn't need it, her story was enough to make me realize that nothing should have
so much control over me.

I never had another cigarette. I quit March 8, 1981. We always remember important
dates, don't we? I am not going to tell you it was easy because it was not. I couldn't imagine
being able to drive a car or speak on the phone without a cigarette in my hand.
But the hardest part was having a cocktail with no cigarette.

But you know what?
You really can do all of those things without a cigarette.
For many years I went in the local school system with the HOT (Hazards of Tobacco)
Program. An effort by our local cancer agency to help young people make healthy
choices about tobacco. I always told that story. I know I could never make the presentation
as powerful as it was made to me, so many years ago. But I can hope that I played some
small part in helping some of those kids know the, Hazards of Tobacco. 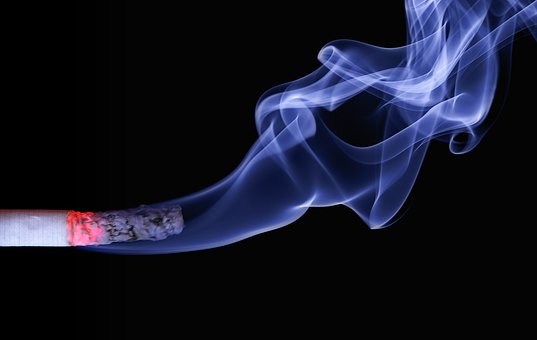