by Rudy P. SysAdmin at howtofindthemoney
Green hysteria is on the verge of , the CEO of Volkswagen has warned. Since motor manufacturing is Germany’s biggest industry sector, this effectively means: Auf Wiedersehen to the German economy.
VW chief Herbert Diess has told Spiegel Online ( by the Global Warming Policy Forum) that the combination of climate protests against cars in general and stricter CO2 emission limits imposed by the EU are pushing Europe’s car industry to the “brink of collapse.”
He said:
“The current campaign against individual mobility and thus against conventional cars is reaching existence-threatening proportions.”
Diess also called out the nonsense of trying to force everyone to shift from petrol-driven cars to electric ones: the electricity that supplies them will still come largely from fossil fuels, so where will be the environmental benefit? 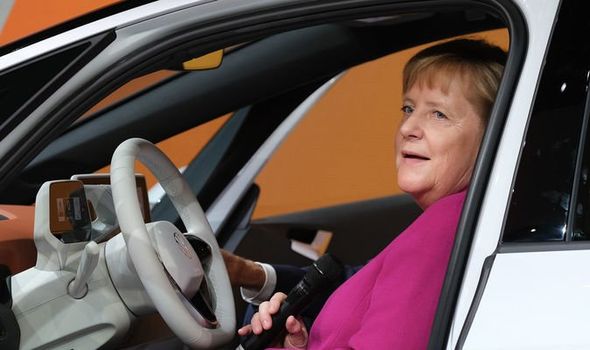 “Instead of using petrol or diesel, we’ll basically use coal, even if we’re electrically powered, and in the worst case we’ll use even lignite,” he said. “That drives the idea of electric mobility ad absurdum!”
The VW boss’s concerns are shared across the European car industry.
UK Employment and Earnings Rising, But European Economies Continue to Falter
— Breitbart London ()
According to Reuters, reporting on the eve of Frankfurt’s biennial International Auto Show (IAA), which opens on Thursday:
“You have cars that cost an extra 10,000 euros to build, fleet-emissions targets requiring a certain sales volume and consumers who may or may not want them,” said one PSA executive. [PSA is the French holding group for marques including Peugeot, Citroen, Opel and Vauxhall]
“All the ingredients are there for a powerful explosive.”
By next year, CO2 must be cut to 95 grammes per kilometre for 95% of cars from the current 120.5g average – a figure that has risen of late as consumers spurn fuel-efficient diesels and embrace SUVs. All new cars in the EU must be compliant in 2021.
Motor manufacturing is Germany’s biggest industry. It employs around 830,000 people. But it now faces a perfect storm of disasters: from ever more stringent EU carbon emissions regulations; from US tariffs; from weakening exports to the Chinese market; from Angela Merkel’s ailing coalition government trying to appease Greens with a new comprehensive climate strategy; from lack of consumer interest in all the electric cars it has built but appears unable to sell; from the diesel emissions cheating scam which is finally hitting the courts next month, with VW facing legal action from 400,000 car owners; from Germany’s Energiewende – the replacement of fossil fuels with more expensive renewables; and from environmental campaigners calling for a ‘transport revolution’ which will lead to the phasing out of private cars altogether.
Some of these problems are the result of international geopolitics, such as President Trump’s tariff war with China.
Most of them, though, are directly of Germany’s own making. No country in the world has pushed the green agenda harder than Germany. (, runs it a close second). Now, just as it was in the last war – only with a differently couched, more virtue-signalling political agenda – Germany is being destroyed by totalitarian ideology.
“Germany is self destructing and it really couldn’t happen to a nicer country,” says the Global Warming Policy Foundation’s Benny Peiser, himself a German. Peiser was originally a member of Germany’s Green movement, before seeing the light.
To make matters worse for the struggling Germany economy, a by McKinsey warns that Energiewende is increasingly jeopardising Germany’s energy supply.
The grim significance of the report is summarised by Mike Shellenberger:
Despite much hype, Germany still generates just 35% of its electricity from renewables. And if biomass burning, often dirtier than coal, is excluded, wind, water and solar electricity in Germany accounted for just 27% of electricity generation in 2018.
But McKinsey issues its strongest warning when it comes to Germany’s increasingly insecure energy supply due to its heavy reliance on intermittent solar and wind. For three days in June 2019, the electricity grid came close to black-outs.
“Only short-term imports from neighboring countries were able to stabilize the grid,” the consultancy notes.
As a result of Germany’s energy supply shortage, the highest observed cost of short-term “balancing energy”  skyrocketed from €64 in 2017 to €37,856 in 2019.
“It can be assumed that security of supply will continue to worsen in the future,” says McKinsey…..
The effect of Germany’s transition to renewables, in other words, has been dramatically to increase the cost the energy and to make the supply more unreliable – all while making barely a jot of difference to its use of fossil fuels.
Again, it would be much, much easier to sympathise with Germany’s plight if it hadn’t spent the last thirty or forty years pushing the green agenda which has caused such damage across the world to those economies foolish enough to fall for the renewable energy/decarbonisation scam.
If Germany’s car industry is toast – and it is – then so is the German economy.
The Germans have a word for the way some of us are feeling right now.
Schadenfreude.
The 10 largest coal producers and exporters in Indonesia:
Click Here! Top Clean Coal Contractors for Power Plant, Gasification, Liquefaction and Emission Control System
Source: Daily Stock Dish