Browse Articles  »  Technology  »  So Sad, Renewable Energy Were Only Able to...

So Sad, Renewable Energy Were Only Able to Provide Less Than 20% of the Required Output

by Rudy P. SysAdmin at howtofindthemoney
Germany may have led the charge, but other European states merrily followed its suicidal attempt to run on sunshine and breezes. The results have been an unmitigated disaster.
Renewable energy zealots keep telling us that wind and solar are free and getting cheaper all the time. Germany puts paid to that lie: Renewable Energy Transition: Wind & Solar Obsession Leaves Germans Suffering the World’s Highest Power Prices
And, with a looming capacity crunch, Germans will be lucky to have power at all, at any price.
Adding insult to injury, German power prices continue to surge (again) and Germans can expect more blackouts and load shedding as their grid groans under the burden of its ludicrous efforts to run on chaotically intermittent wind and solar.
And the symptoms of Germany’s obsession with wind and solar are clearly contagious, as the disease spreads and leaves a number of other European states facing the same power pricing and supply calamity.
As Ed Hoskins carefully details below, anyone who thinks that we’re well on our way to an all wind and sun powered future is in for a very rude surprise.
The unreliability of Weather Dependent Renewable Energy in Germany, the UK and France

Introduction
Almost half of the Name Plate value of Power generation in Germany, the UK and France in 2019 was Weather Dependent Renewables, Wind (Onshore and Offshore) and on Grid Solar PV. However those installations contributed less than on fifth of the power output. Being unsynchronised and their times of production was poorly coordinated with demand, so that power output was often effectively worthless or indeed damaging to Grid stability,
In addition the mandated “Renewables Obligation” meant that those vagaries could only be supported by dispatchable power from conventional sources, mainly Gas-firing, Nuclear and an amount of Coal / Lignite. By European and Government policy these high quality, controllable and dispatchable resources were often forced to work inefficiently and thus non-profitably to maintain Grid frequency and consistency.
At current levels of penetration by Weather Dependent Renewables, European electricity Grids are becoming more and more unstable and at risk. The inevitable results will be supply failures across Europe on an ever increasing scale.
The combined context
More than 55% of Weather Dependent Renewable Energy, (WDR), installations in the EU(28) are accounted for by three European Nations with markedly differing approaches to electricity generation:
Combined these three Nations are characterised by:
Hourly dataset over the year December 2018 – November 2019
This post presents graphics from a combined hourly Megawatt dataset for the three Nations over the period from December 2018 to November 2019. All power output graphics are set to the same gross scale for direct comparisons. Percentage graphics are set on the basis of the proportion of hourly combined generation.
Germany as a result of its long-standing Energiewende policy has now installed more than one third of the total Weather Dependent Renewables installation in the EU(28). For further comparative details of the development of Weather Dependent Renewable generation in other European nations see https://edmhdotme.wordpress.com/eu-weather-dependent-renewable-energy-installations-output-costs-2008-2017/
The three National data sets are also combined for the 2018-2019 period. Productivity / Capacity percentage is the performance measure for generation technologies, it consists of the actual Power output / Name Plate power rating. The datasets include hourly data for the following generation technologies: 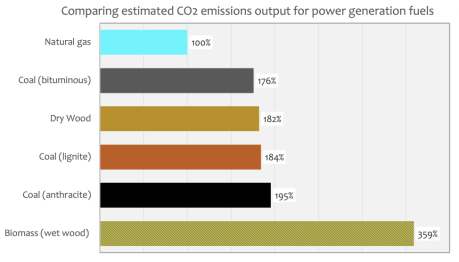 In addition an assessment is made of net transfers to and from each Nation.
It is important to note that:
The mandated insistence on the use of power from Renewables in preference to “base load power”, whenever it may be available also means that those more valuable sources of consistent power generation technologies may be chronically underused much of the time, as they are forced to continually compensate for the vagaries of weather incurred by the intermittency and variability of power production by Renewables.
The Unreliability and Intermittency of Weather Dependence
Wind farm promoters assert that the Wind is “always blowing somewhere”. The following graphics show the percentage of generation that occurred in Germany, the UK and France over a 7 day period in January 2019, a period of high power demand. It is clear that in all three locations Weather Dependent Renewables were only able to provide less than 20% of the required output and on several days they produced virtually no power at all.
The Renewables power output failure was coordinated across all three Nations. This interruption was long enough not to be able to be covered by any battery back-up. 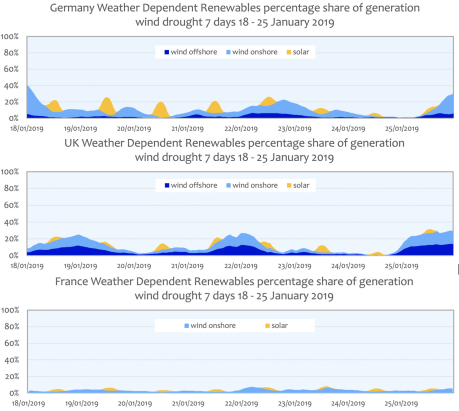 The combined results show the coordination of low Weather Dependent Renewables production over the period.

In contrast, the graphic below shows production over an 18 day period of excess wind power in Germany. Wind power can ramp up very rapidly for example on 27/2/2020 from over from 10% to 70% as a storm hit widely across a country. Often Wind power can be seen to reach 70% of power production but even with high production there can also sudden, precipitous fall-offs as shown here, dropping from ~70% down to ~30% in just a few hours.
In addition the regularly intermittent but highly variable Solar input only complicates the problems of grid management to enable an essential consistent power supply.

This Grid management problem induced by dependence on Renewables is well illustrated below where in summer months from May – September Wind Power rarely exceeds a 20% contribution and for extended periods it remains below 10% across the three Nations. The average contribution over the summer period was at level of ~12%. The problem is further exacerbated by the Solar power contribution varying daily from up to a 30% contribution to nil over each 24 hour period.

There is some co-ordination between the Solar power production and the fall-off of Wind production in summer. However this cannot compensate for the short term problems for the Grid that sudden changes in weather can impose, nor those that diurnal Solar production imposes on the grid: the world turns.

Combined Weather Dependent Renewables in Germany, the UK and France
Graphic presentations for the three Nations in combination follows. 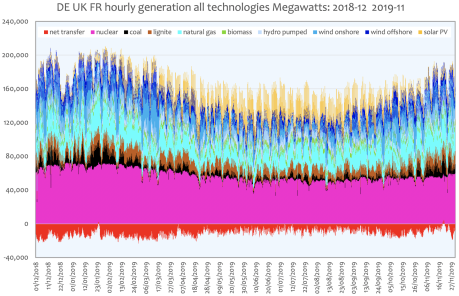 The crucial importance of Nuclear generation becomes clear here. It makes the German decision to eliminate its Nuclear in a few years from now only truly emotional grounds after the Fukushima accident look monumentally ill-advised. Similarly the French decision to cut back its effective Nuclear fleet to only about 50% of its generation, replacing the shortfall with Weather Dependent Renewables is equally foolhardy not only for France but also for the future stability of the overall European and UK power supply, often dependent on reliable Nuclear power supply from France.

As far as CO2 emissions are concerned in 2019 still about a third of generation relied CO2 emitting fuels. Germany is still highly reliant on Coal, Lignite and some Biomass, resulting the German CO2 emissions still being the highest in Europe in spite of its longstanding Energiewende policy. The continuation of that policy with the attempted closure of Coal and Lignite generation as well their Nuclear fleet will endanger power supplies Throughout Germany.
The 1990s move to Gas-firing as opposed to Coal in the UK has helped reduce its indigenous CO2 emissions to well below the European average.
French CO2 emissions are, uniquely for a developed Nation, below the Global average but as they reduce their Nuclear commitment and intend to replace them with Renewables its CO2 emissions are likely to grow simply from the need for dispatchable back-up power to compensate for the vagaries of the weather impacting on Renewables.

The performance of contribution of all nominally “Green” generation technologies including Weather Dependent Renewables in the three Nations is shown below. Biomass and traditional Hydro electric generation make a consistent contribution of useful dispatchable power. Even though the “detrimental” CO2 emission and biodiversity characteristics of the use of Biomass is conveniently ignored by politicians in their pursuit of “Green” goals. The potential for Hydro electricity is wholly dependent on a Nation’s topography and only really contributes in France and Germany.
More important in this graphic is the enormous variability of Weather Dependent generation, which by mandate now has to be accommodated by National power grids. With a continuing “Green” ambition across Europe to eliminate the use of both fossil fuels and Nuclear power this Grid management problem can only deteriorate leading to inevitable damaging cuts in power supply. 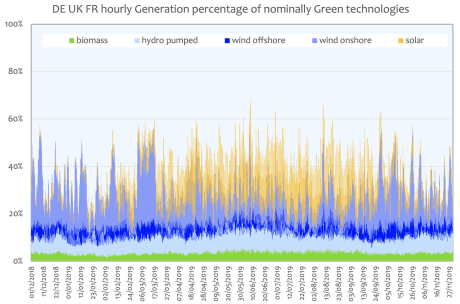 Professor Sir David Mackay
The late Prof David Mackay, (former chief scientific advisor of the Department of Energy and Climate Change), in a final interview before his untimely death in 2016 warned that the concept of powering a developed country such as the UK with Weather Dependent Renewable energy was:
“an appalling delusion”.
At the time he also said:
“There’s so much delusion, it’s so dangerous for humanity that people allow themselves to have such delusions, that they are willing to not think carefully about the numbers, and the reality of the laws of physics and the reality of engineering….humanity does need to pay attention to arithmetic and the laws of physics.”
later in the same interview he said that:
“if it is possible to get through the winter with low CO2 Nuclear and possibly with Carbon Capture and Storage there is no point in having any Wind or Solar power in the UK generation mix.”
But it seems that having bought into the assumption that Catastrophic Man-made Global Warming is an immediate and existential threat that Government elites, when faced with these simple but devastating calculations, assume a position of “willful ignorance”, and a stance of “don’t confuse me with the facts, we are saving the world“ (https://www.spiked-online.com/podcast-episode/we-need-a-democratic-revolt-against-the-climate-extremists/ minute 40 onwards).
There is also an irrational determination in Government that the only solution to reducing CO2 emissions is the use of Weather Dependent Renewables. This is a fallacy: the only proven solutions to CO2 emissions reduction are the use Nuclear energy as in France and / or the use of Natural gas as in the USA, but these real solutions to reducing CO2 emissions, were it worthwhile, are somehow always rejected out of hand, because they do not accord with the emotional tenets of the “Green” religion.
Conclusion
If the objectives of using Weather Dependent Renewables were not confused with possibly “saving the planet” from the output of the UK’s or Europe’s small and diminishing level of CO2 emissions, (for electricity generation, ~25% of 1.1%, the UK 2018 portion of Man-made Global CO2 emissions), their actual cost, in-effectiveness and their inherent unreliability, Weather Dependent Renewables would have always been ruled them out of any engineering consideration as means of National scale electricity generation.
The annual UK / Europe CO2 emissions output is surpassed just by the annual growth of CO2 emissions in China and the Developing world.
It is essential to ask the question what is the actual value of these government-mandated excess expenditures to the improvement of the Global environment and for the value of perhaps preventing undetectable temperature increases by the end of the century, especially in a context where the Developing world will be increasing its CO2 emissions to attain it’s further enhancement of living standards over the coming decades?
Trying to reduce CO2 emissions as a means to control a “warming” climate seems even less relevant when the long-term global temperature trend has been downwards for last 3 millennia, as the coming end of our current warm and benign Holocene interglacial epoch approaches (see here and here).
The 10 largest coal producers and exporters in Indonesia:
Click Here! Top Clean Coal Contractors for Power Plant, Gasification, Liquefaction and Emission Control System
Source: Stop These Things