by Rudy P. SysAdmin at howtofindthemoney
New Pathways for Efficient Power From Coal and Biomass. Direct Injection Carbon Engine - A Specially Adapted Diesel Engine That Uses Coal and Carbon-based Slurry as Fuel
The challenge
Global warming, largely caused by increases in greenhouse gases in the atmosphere, is a modern challenge. While various actions can be taken to reduce greenhouse gas emissions, the size of the problem is so large that a mix of approaches is necessary. Coal-based electricity provides about 80 percent of Australia’s National Electricity Market (NEM) supply. The major challenge for coal-fired power generation is to reduce its CO2 emissions. 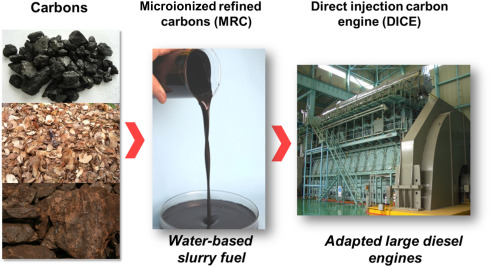 The response
In collaboration with industry partners CSIRO has been developing an alternative pathway to low emissions electricity from coal and waste biomass through the Direct Injection Carbon Engine (DICE). DICE is a modified diesel engine running on a mix of coal and water. This advanced coal technology involves converting coal or biomass into a water-based slurry- a fuel called micronised refined carbon (MRC) that is directly injected into a large, specially adapted diesel engine. The fuel burns to produce intense temperature and pressure in the engine, which provides highly efficient power to turn electrical generators.
CSIRO’s research is developing processes to produce the low-mineral-matter MRC required by DICE from a range of feedstocks, including brown coal, black coal, and woody biomass. The unique test facilities allow characterisation of the injection and combustion behaviour of these MRC fuels under the intense conditions found in diesel engines. In addition, CSIRO are partnering across the supply chain to gain valuable large- scale experience that will support the ongoing commercialisation of this technology.
DICE combines the superior thermal efficiency, flexibility, and lower capital cost of the diesel engine with the low cost and availability of coal.
The impact
Benefits of this technology include increased efficiencies in electricity generation; significant reduction in greenhouse gas emissions; delivery of power in a shorter timeframe and at a smaller scale than conventional coal technologies; and diverse fuel potential including black and brown coal, as well as biomass, tar, and plastics.
DICE technology is probably best described as in the demonstration to deployment phase of development. On this basis, current estimates suggest that the real program expenditure of $61.8 million will lead to:
The 10 largest coal producers and exporters in Indonesia:
Click Here! Top Clean Coal Contractors for Power Plant, Gasification, Liquefaction and Emission Control System
Source: DiceNet