Browse Articles  »  Technology  »  Top 7 Tools That Every React Developer Should...

Facebook created React as a library maintained and developed by third party developers. It is basically a lightweight JavaScript library that allows you to make beautiful UIs for your web apps using reusable building blocks. These isolated blocks are called components and can be used to develop different kinds of applications. React also has an integrated ecosystem that includes several tools, component libraries, IDEs, extensions for code editors and web browsers, boilerplates, and more.

Components allows you to divide the entire project into individual parts. This in turn helps you gain control of your project workflow and simplify the distribution of tasks within your team. Instead of worrying about the whole project, you can spend time developing and testing every component. This approach also decreases overall time spent on developing and testing apps.

Here are 7 easy to use tools for faster and easier React development. 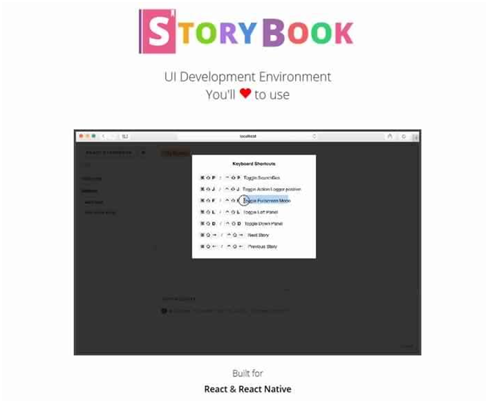 GitHub describes Storybook as an interactive UI component dev and test that supports React, React Native, Vue, and Angular. It is a powerful tool that acts as a development environment for UI components. It comes with several add ons for component design, documentation, and testing. This shortens the gap between coding and output. One can develop each component in isolation from the rest of the app using storybook for better reusability. the library contains components that can be tinkered around with and tested instantly with hot-reload on the web. 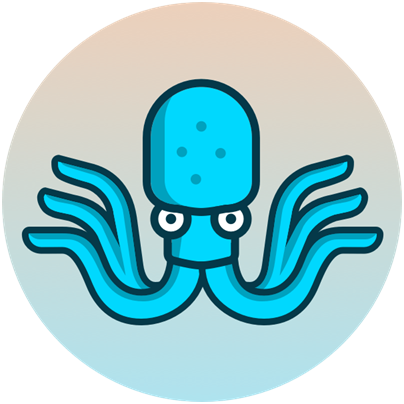 React Styleguidist is also a component development environment much like Storybook but with some differences. Unlike Storybook, Styleguidist shows multiple variations of different components. This feature makes it useful for documentation and demos of different components. It comes with a hot reloaded dev server and a living style guide which shows editable examples in markdown files. It supports ES6, Flow, and TypeScript and works with React create app. 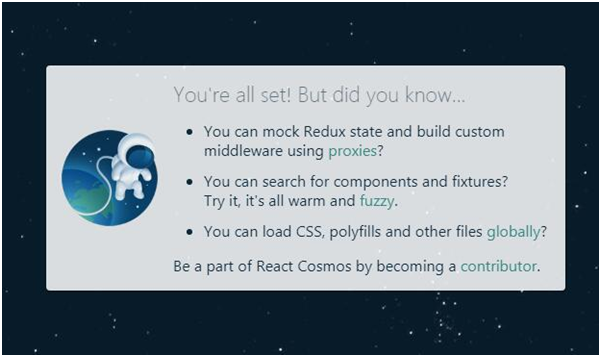 React Cosmos is a component developer that lets you add new functionalities to your app even if you have already started the project. Cosmos uses fixtures and proxy architecture to show the state of your app in real time while interacting with running instances. It scans your project for components and allows you to render them in any combination of props, context, and state. React Cosmos also makes it possible to mock any external dependency such as the rest API or local storage.

Bit is an open source platform that can be used to organize components from different apps and projects without any refactoring. It also makes them accessible to discover, use, and develop when building new features and applications. Components that are shares via Bit are available for installation with NPM/Yarn or Bit itself. NPM/Yarn allows you to develop the components from different projects and update the changes between them. To make discovering components easier, Bit uses visual rendering, test results and docs parsed from the source code itself. The main benefit of Bit is that it allows you to develop multiple applications at once and use your components as building blocks for new projects in the future. 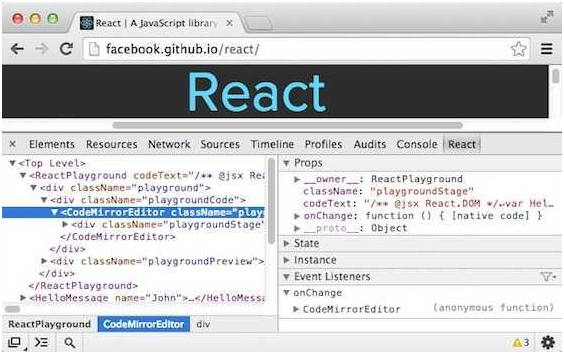 It is basically a Google Chrome extension that inspects the React component hierarchy right inside your browser, including component props and state. The extension adds a new tab to your chrome DevTools where you can see how the changes in a component affect the other components. Facebook also released a Firefox extension which has the same functionalities as the Chrome one. The search bar allows you to quickly find and inspect the components you need, saving precious development time.

This is another extension developed by Facebook that is available for both Chrome and Firefox. It provides power ups for your Redux development workflow and also lets you inspect every state and action payload. Redux DevTools can be integrated with any architecture which handles the state. Multiple stores or different instances can be created for the local state of every React component. The logging UI itself can be customized as a React component.

Setting up a new environment for a new project is not easy considering all the requirements. The Create React App is a single command line tool that can quickly help you get a new React app up and running. It requires zero configurations and is suitable for any backend language. It sets up a developer environment and optimizes the app for production. It creates a directory inside the current folder and generates the initial project structure so you can simply start coding.

These are the main tools that most developers swear by. Several more tools exist which can be explored as you gain valuable experience and grow more accustomed to the React platform.