SAM®Yttrium is the first rare earth metal element that has been discovered. It is a gray-black metal that is malleable. It reacts with hot water, and is easily soluble in dilute acid. Yttrium can be used to make special glass and alloys. 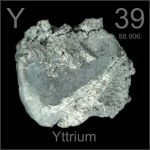 Yttrium is one of the most abundant elements of rare earth elements in the earth's crust. It mainly exists in the silicon germanium ore, black rare earth ore and xenotime, and has also been seen in monazite and fluorocarbon waste ore.

The purity of yttrium produced in the industry is generally not less than 93.4%, and its main impurities are other rare earth elements (content: 3.8%, calcium 1.6%; iron 0.05%; copper 0.1%; bismuth or tungsten 1%). It is also possible to produce yttrium having a purity of not less than 99.8% or more. The main impurity in high purity yttrium is still other rare earth elements.