NGO in Odisha & Its Kitchen

Odisha is an eastern state in India known for its rich culture and heritage. It is enriched with natural beauty and fascinating tribal culture. Amidst the wonderful things in Odisha exists The Akshaya Patra Foundation, a place that cooks and provides meals of hope! Yes, and they do this every day.

A meal that upholds the dreams and hopes of children; a meal that instils the conviction that it is possible to achieve every dream – is a meal of hope. Each child has an aspiration and it has been observed that in many circumstances a simple school meal allows children to attend school and makes them confident of achieving their goals in life. In light of this, governments and many NGOs have taken up the cause of providing school lunch to children under the provision of Central Mid-Meal Scheme, and Akshaya Patra is one among them.

How is Akshaya Patra providing meals of hope? 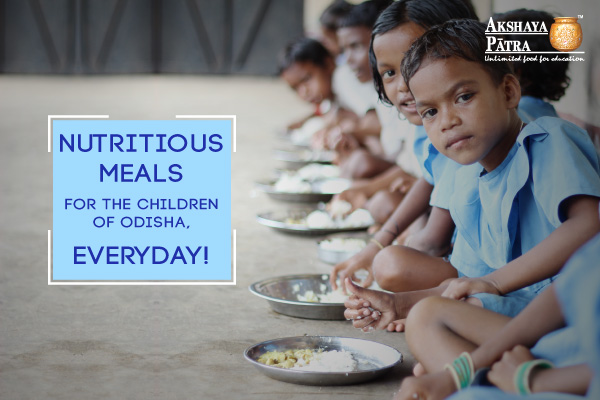 Akshaya Patra is an Indian mid-day meal NGO providing school meal to children in 12 states of the country. It began its journey as an NGO in Odisha in the year 2006 by establishing its centralised kitchen in Puri. Each school working day, Akshaya Patra prepares over a million meals –healthy, nutritious, and tasty – and serves it to government school children. The Foundation operates its kitchens from four locations - Puri, Rourkela, Bhubaneswar, and Nayagarh.

By implementing the mid-day meal programme in Odisha, Akshaya Patra provides school lunch to 180,140 children in 1,840 schools every day.

What gets served in meals of hope?

Akshaya Patra wants to maximise the benefits of the mid-day meals. Hence, it has designed its meal menu based on the local palate. Some of the menu items are: rice, rice barabati (an Odia dry vegetable dish), dalma (an authentic Odia dish made of lentil), aloo matar paneer curry (a curry made of potatoes, peas, and cottage cheese), mix vegetable curry, rajma mix sabji (a dish made of kidney beans and vegetables), white lobia curry (black-eyed peas curry), aloo soya chunk matar curry (a curry made of potatoes, soya chunk, and peas), kheer (rice-based sweet dish), and pickle. With every meal, the Foundation serves a dollop of ‘hope’ that strengthens the determination of children every day.

The power of a meal

This story will reveal the power of a school lunch and the reason we must all support it in our small or big way.

Ranthi Ekka is an 11-year-old girl studying in Standard III in Manko Upper Primary School in Sundargarh District. Her troubling past has made her skeptical about many things. Ranthi lost her father when she was a toddler and perhaps worried and unsure of how to raise a child single-handedly Ranthi’s mother left her at the mercy the maternal grandparents. Responding to this, Ranthi’s grandparents say, “It is sad that Ranthi’s mother decided to leave without telling us, but now that Ranthi is with us, she is our responsibility.” Ranthi’s grandfather works as a daily wage earner in fields. He says that though their condition is not very favourable, yet he wants Ranthi to go to school because he understands the importance of education.

Ranthi’s grandparents had heard about meals being distributed in the school every afternoon but were under the impression that they will have to pay for it. One day, when Ranthi’s grandfather was walking past the school, he saw an Akshaya Patra meal delivery vehicle and gathered the courage to ask the vehicle driver where was this food coming from and how much he would have to pay for it. The driver immediately said that the meal is coming from Akshaya Patra and it costs nothing and introduced Ranthi’s grandfather to the school authorities. The school authorities told him that if he gets Ranthi admitted to the school, she too will get the same food, completely free of cost. Relieved and elated at the idea of his granddaughter getting a plateful of food every day, Ranthi’s grandfather immediately got her admitted to the school.

Thus, began Ranthi’s journey of receiving nutritious meals and rightful education. And, she surprised us all by exhibiting her talent in the sports field!

Corporates and philanthropic donors such as Rourkela Steel Plant, The Kusuma Trust (UK), RC Infinity Foundation (Kolkata), LIC Golden Jubilee Foundation, NALCO, and the Odisha Mining Corporation have come forward to boost the service of Akshaya Patra in the state.

But, it is equally important for the civil society to join in the efforts of this NGO in Odisha. There are many ways you can help Akshaya Patra to increase its beneficiary base. You can donate to charity by opting to donate for meals, adopting a school, or donating meal delivery vehicles. Your participation can change lives of children in an everlasting way.