With National Women's Health Week (May 8-14) fast approaching, it is time to highlight a common, but rarely discussed gynecological problem faced by millions of women, namely uterine fibroids, despite the fact that they are reported to be the most common benign tumors in women of childbearing age in the US. In fact, recent studies involving randomly selected women across the country between ages 35- 49 years found that the incidence of uterine fibroids by age 35 was 60% among African-American women and 40% among Caucasian women. The incidence increased by age 50 to greater than 80% and to almost 70% for African-American and Caucasian women, respectively. In addition, it was revealed that the condition is responsible for nearly 1/3 (roughly 200,000) of all hysterectomies in the US each year. Moreover, in 2007, there were an estimated 355,137 uterine fibroid-related hospitalizations in women aged 15–54 years.

Fibroids are made of muscle cells and other tissues that grow in and around the wall of the uterus, or womb. Symptoms of uterine fibroids can range from mild to severe and often include (but are not limited to): abnormal uterine bleeding characterized by long, heavy, and / or irregular menstrual cycles, passing clots; pelvic pain; pelvic pressure, backache, and abdominal bloating, distortion; infertility and recurrent miscarriages. They may also be the cause premature labor or interference with the position of the fetus. 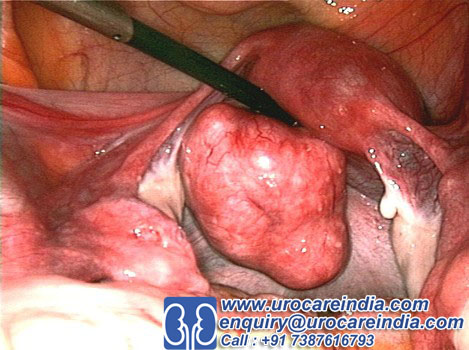 Yet the survey found that women often wait an average of 3.6 years from onset of symptoms before seeking treatment and 42% of women saw 2 or more healthcare providers before diagnosis. The cause of fibroids is unknown. However, fibroids run in families and appear to be partly determined by hormone levels. In fact, they are dependent on estrogen and progesterone to grow and therefore relevant only during the reproductive years. Risk factors include obesity and eating a lot of red meat. Diagnosis may occur by pelvic examination or medical imaging.

Most fibroids do not require treatment unless they are causing symptoms. Current fibroid treatments, however, include medication to control symptoms including oral contraceptives (to reduce uterine bleeding and cramping); medication aimed at shrinking tumors (including aromatase inhibitors); ultrasound fibroid destruction; myomectomy or radio frequency ablation; hysterectomy; and uterine artery embolization. In the meantime it should be noted that fibroids tend to shrink after menopause and it is unusual for them to cause problems at that time.

and it is unusual for them to cause problems at that time.