We have been discussing the need for gender inclusivity for many years now. This is important if we have to attain high economic growth. At a time when we are speaking of increasing the economy’s growth rate, we cannot expect to keep half the population out of economic participation and have high growth.

Inclusivity is an intention or policy of including people who might otherwise be excluded or marginalised. In this case, girls at the school level. On this Children’s Day, let’s take the pledge to educate male and female children equally. 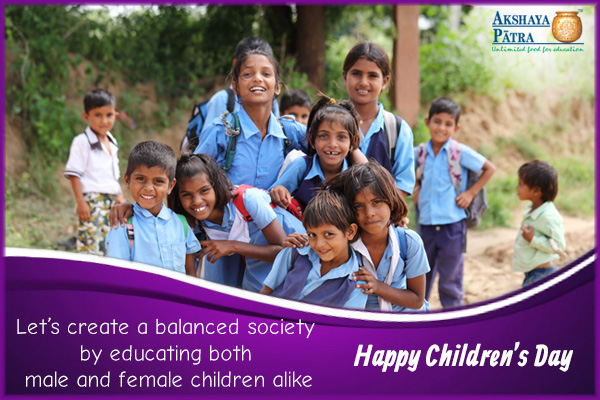 But, to ensure that women play an equal role in the economy, the efforts have to start early enough. We cannot think of having high women’s participation at the workplace if the need for gender inclusivity is not encouraged from the school itself. This is because, children are the future and this fact cannot be ignored.

The girls are often not encouraged to compete with boys in many of the things and for being successful in the world where job participation of women is lesser, they will feel intimidated. Thus, it is imperative that gender inclusivity is integral to the system.

Much of this happens because of established social norms and religious beliefs.

But, this lack of inclusivity at schools will show up in the world of work. This can have disastrous consequences for the country as the economy will be hit hard.

What can be done?

It can be more pronounced among the more economically challenged. The Akshaya Patra Foundation has been making efforts to ensure that this does not happen. To implement this, a lot of resources are required. You could help with the efforts to educate girls. If you Donate for child education, it could do a world of good, ensuring that you will contribute to educating girls who may have dropped out as their families believe that girls need not be educated or as educated as boys.

Incentives, safe and conducive environment besides a level playing field were the factors considered critical to boost women participation in the Indian workforce, the World Bank had said in a report earlier this year.

In India Development Report, the World Bank said the country had one of the lowest female participation in the workforce, ranking only 120th among 131 countries for which data was available. While the overall job creation has been limited, most of the new ones have been grabbed by men given the social norms, the report said.

What is worrisome is the fact that the participation level has been dropping since 2005, despite having 42% women who are graduates. The report highlighted that India’s potential GDP growth rate can be boosted by a percentage point if women’s participation increased.

Jobs for Indian women remain primarily in the agriculture sector today. The share of women in services and industry is less than 20% today.

It is necessary to keep participation and efforts for inclusion going and it has to start at school as all children have a Right to Education and it this equality has to continue to the world of work.


About Feed The Future Now