iOS 12.1 version has recently released. This article is going to highlight the major features introduced in this latest version.

Apple organised an Event at the Brooklyn Academy of Music to launch this new version and along with the release, Apple announced that a new Mac mini, a MacBook Air of 13.3-inch with the Retina Display and iPad Pros with USB-C and Face ID are also in the way!

Well, prior to the release, Apple released a detailed User Guide for this latest version. Read on to know what’s in the box! 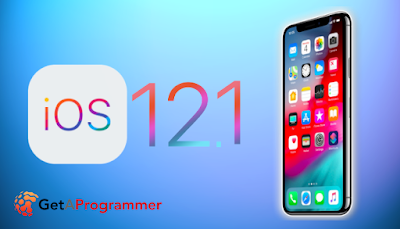 Well, yes! With this new iOS 12.1 version, you can now enjoy the dual sim support in iPhone XR, iPhone Xs Max and iPhone Xs. It is going to feature digital eSIM and a nano-SIM. Now, without using a physical nano-SIM, users will be able to activate an additional cellular plan from a carrier.

Click here to get more information on how to set up Dual SIM.

Now, clicking sophisticated portraits with a more professional touch using the advanced depth segmentation is easier. With iOS version 12.1, you can dynamically adjust the field depth in real-time. Also, more options are available to blur the background.

This portrait mode with the Depth Control is available for selfies as well on the TrueDepth camera. This includes Memoji along with faster support for face tracking for the third-party ARKit applications.

Well, emojis are a great way to express how you are feeling or what you are thinking. Also, emojis make a conversation more interesting.

In this latest iOS 12.1 version, over 70 new emojis including more emotive smiley faces, new characters, new foods, sports, and animals have been introduced.

Majorly, these aforementioned changes have been highlighted. However, other than these, you can experience minor changes in the AR (Augmented Reality), Siri, Do Not Disturb, Screen Time, Notifications, Performance, Privacy and Security, App Updates along with many other sections.