3 Reasons Why AMOLED Display Screen is better than LCD screen

The AMOLED screen displays crisp pictures with more beautiful images than the LCD screen. It is manufactured under high technology for which everything shows on the screen would be looked more vibrant and very beautiful. The color accuracy and color reproduction are better than the LCD display screen. As we can see that most Samsung models have great image displaying because of the AMOLED screen. That’s the reason why Apple authorized the mobile screen manufacture from Samsung.

2.  The AMOLED screen is light, foldable and flexible

AMOLED screen consists of four layers, a window layer, a pol layer, an Encap layer, and a backplane layer. That’s why AMOLED screen phones are slimmer than other iPhone 7 LCD screen smartphones. Besides, the AMOLED screen is light and flexible. Samsung Galaxy Z Flip and Samsung foldable are good examples for demonstration. The LCD screen also consisted of a window layer and pol layer, but it also has more layers like a TFT layer, backlight layers. The LCD screen smartphones tend to be thick and heavy, that’s the reason why users like AMOLED smartphones better than LCD screen phones. 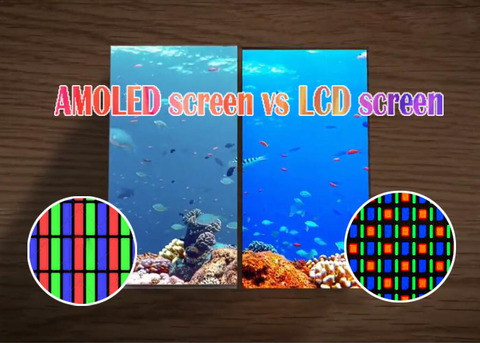