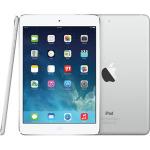 Does even more. Weighs even less. The new iPad Air is unbelievably thin and light. And yet its so much more powerful and capable. With the A7 chip, advanced wireless, and great apps for productivity Recommended Features Learn more about Apple iPad Air (silver)»

Does even more. Weighs even less. The new iPad Air is unbelievably thin and light. And yet its so much more powerful and capable. With the A7 chip, advanced wireless, and great apps for productivity and creativity--all beautifully integrated with iOS 7--iPad Air lets you do more than you ever imagined. In more places than you ever imagined.
iPad Air'a aluminum unibody design means it's dropped almost a quarter of the volume of the previous-generation iPad. So it weighs just one gravity-defying pound. But what makes iPad Air truly remarkable is that it packs so much more power and capability into its sleek enclosure. So you can do even more with it, while carrying even less with you.
Despite its reduced width, along with the bezels on the sides of the display, the size of the stunning Retina display is exactly the same. Your content fills your view more than ever. Photos and videos pop with detail and text looks razor sharp. Pixels are indiscernible. So all you see is what you want to see.
The new Apple-designed A7 chip brings 64-bit desktop-class architecture to iPad. That means up to twice the CPU speed and graphics performance for everything you do. And still up to 10 hours of battery life to study, play, build, and create whatever you want, all you want!
MAKES A GREAT GIFT FOR ANYONE!
PRODUCT FEATURES:
* Storage: 16GB
* Dimensions: 9.4 inches (h) x 6.6 inches (w) x 0.29 inch (d)
* Weight: 1 pound (469 g)
* Power and Battery:
Built-in 32.4-watt-hour rechargeable lithium-polymer battery
Up to 10 hours of surfing the web on Wi-Fi, watching video, or listening to music
Charging via power adapter or USB to computer system
* Input/Output:
3.5-mm stereo headphone minijack
Built-in speakers
Dual microphones
* Sensor:
Three-axis gyro
Accelerometer
Ambient light sensor
* Operating System: iOS 7--the worlds most advanced mobile OS
* iSight Camera
* Video Recording
* FaceTime HD Camera
* Wi-Fi (802.11a/b/g/n); dual channel (2.4GHz and 5GHz) and MIMO; Bluetooth 4.0 technol