Browse Articles  »  Technology  »  Why Use Pull-up Resistor and Pull-down Resistors?

Why Use Pull-up Resistor and Pull-down Resistors?

by Hugh S. Electronic Parts
Introduction
As we all know, resistors play a important role in limiting current in the circuit. Among then, pull-up resistors and pull-down resistors are often mentioned and frequently used in electronics. The pull-up is to clamp the uncertain signal to a high logical level through a resistor, which acts as a current limiter; while the pull-down resistor clamps the uncertain signal to a low logical level. Because there are only two states of high level and low level in digital circuits, it is uncertain at the initial stage of digital signals.
1 Why pull-down and pull-up resistor?
Pull-up and pull-down resistors are often applied when interfacing a switch or some other input with a microcontroller or other digital gates. That is, in the initial stage of digital circuit power-on, because the high logical level and low level of the output state are uncertain, in order to make the circuit state normally, a pull-up resistor or pull-down resistor is needed to stabilize the uncertain circuit state. The low logical level is connected to GND inside the IC, and the high level is connected to the super resistance inside the IC.
The pull-up resistor connects with the status port of the power supply. Simply put, the high voltage is applied to this point, where the potential will increase. The pull-down resistor means that the resistor is connected to the negative pole, and there is also the case of digital grounding. When the input port signal changes due to different circuit forms, the change will be fed back to the output port, so that the output port acquires a state that should have been completed, but the input port has no signal at this time and keep the original state.
According to the above understanding, many people may feel awkward. Take an example from daily life, when you use the key to open the door, people enter but the door is not closed, at this time, you can add a switch to make the door close automatically. 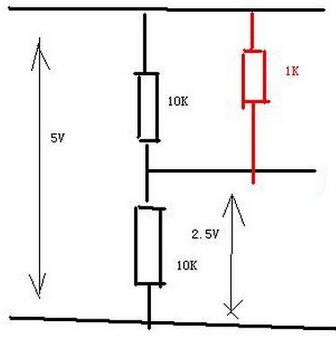 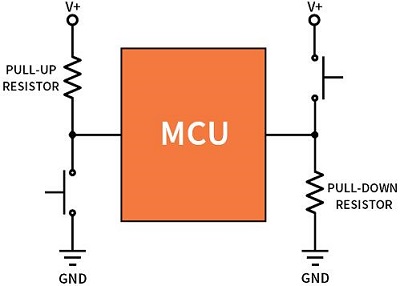 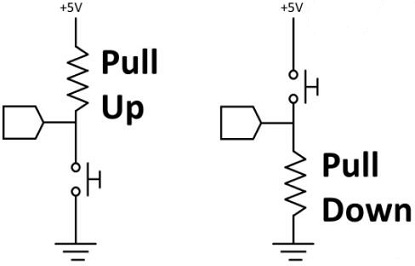 Pull-up/ Pull-down Resistor
5 How to Select Pull-up & Pull-down Resistors?
When select pull-up & pull-down resistors, you can consider the following three aspects:
1) Considering power saving, sink current capability of the chip should be large enough, the resistance is large and the current is small.
2) It is necessary to ensure sufficient drive current, so the resistance is small and the current is large.
3) For high-speed circuits, excessive pull-up resistors may have smooth edges.
Considering the above three points comprehensively, the resistance value is usually selected between 1K and 10K. The same principle applies to pull-down resistors.
If you interested in more details, you can get the video description from Pull-up/ Pull-down Resistor Explained.