by Hugh S. Electronic Parts
Introduction
The start relay is a special component for starting the compressor using a single-phase asynchronous motor. As a separate component, its function is to connect and disconnect the attracting coil to control circuits. In small home equipment such as refrigerators and air conditioners, their refrigeration compressors mostly use single-phase split-phase asynchronous motors, requiring the starter relay activation. After the start is completed, the auxiliary winding is automatically disconnected to avoid burning itself. 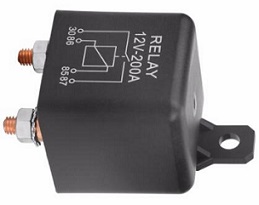 1 What is Start Relay?
Start relays belong to the switch category. They use electromagnetic and electromechanical principles to close or open contacts to drive or control related circuits. Relay is a control device, which has two parts: controlled system (input loop) and control system (output loop). When the input quantity (electricity, magnetism, light heat and other physical quantities) reaches a certain value, the output quantity changes abruptly from zero to a certain value (or from a certain value to zero). So as to realize the control and protection of the circuit, regulation and transmission of information.
2 Where are Start Relays Used?
The starting relay is a control element that realizes automatic starting of a single-phase split-phase induction motor. For example, when the refrigerator compressor is started, the motor winding is energized; when the start-up ends and the normal operation is on, the starting relay will cut off the power supply of the winding. There are several types of starting relays commonly used in refrigerators, such as integral starting relays, heavy hammer starting relays and VIE semiconductor starting relays.
The function of the automobile starting relay is mainly to control the current of the high-voltage line by controlling the current of the low-voltage line, playing the role of a current switch. The starter relay is one of the components of the starter system. The main function of it in car is to start the motor rotation in a small current control high current mode, thereby driving the magneto rotor inside the generator to rotate, inputting an ignition pulse signal to the igniter, and causing the igniter to generate an electric spark, finally ignite the mixed gas in the cylinder and perform work.
3 What are the Types of Start Relay?
3.1 Current Starting Relays
The coil of the current-type starting relay is connected in series with the operating winding of the compressor motor. When the motor is running, the operating current passes through the coil of the relay, and the control contact is connected in series with the starting winding to control it. The heavy hammer type, PTC(positive temperature coefficient) type and mercury start relays are very common type.
(1) Heavy Hammer Start Relay
It is mainly composed of a coil, an armature, a moving contact, a static contact and a wiring terminal. 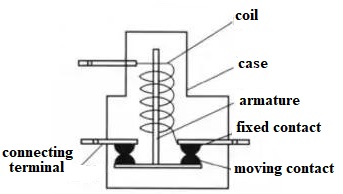 Heavy Hammer Start Relay Structure
The control contact of the relay is normally open. When the power turned on, only the relay coil and the running winding have current. Because the rotor is stationary, the starting current is very large, so that the relay coil attracts the armature to move upwards, moving and static contacts close, turn on the start winding, and the compressor starts to rotate. As the speed increases, the current decreases, the armature falls by its own weight, the contact is disconnected, and the starting action is completed.
(2) PTC Start Relay
The PTC element is a positive temperature coefficient thermistor, which is a barium titanate type semiconductor that is doped with trace rare earth elements and made by a special process. The resistance value of the PTC heat-sensitive element used in the air conditioner is only a dozen ohms in the cold state, that is, it begins to be in a path state in the compressor starting circuit. When the compressor starts, the current is very large, so that the temperature of the PTC thermistor quickly rises to the Curie point (usually 100°C to 140°C), and its resistance rises sharply and becomes an open-circuit state. This characteristic of PTC thermistor makes it widely used as a contactless start relay in small air conditioner compressors. 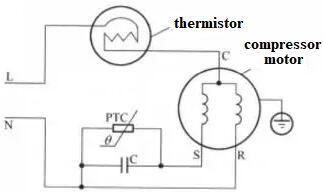 PTC Start Relay Wiring
In practical applications, the PTC starting relay is connected in parallel with the starting capacitor and then connected in series with the compressor starting winding. At the moment when the compressor is connected to the power source, the resistance of the PTC start relay is very small, and it is in a state of passage in the circuit, and the current passing through the starting winding is very large, which makes the compressor generate a large starting torque. At the same time, because the resistance of the PTC element increases sharply, the start winding is disconnected, so that the compressor enters a normal operating state.
The PTC start relay has a simple structure, no contacts and moving parts, so its performance is reliable. Due to the thermal inertia of the PTC components, it takes 4 to 5 minutes after each startup to cool down.
(3) Mercury Start Relay
It consists of a coil, a plunger core, mercury and two electrodes. Because the coil of the mercury starting relay is connected in series with the compressor winding, and there is current passing through when running. 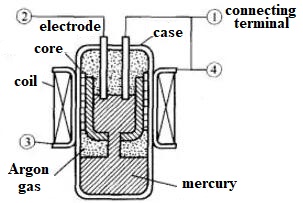 Mercury Start Relay Structure
A current coil is wound on the outside of the starter cylinder, and the inside of the cylinder is equipped with a plunger iron core and mercury, and is filled with anti-oxidation argon gas. The current coil of the starter is connected in series with the compressor winding. The plunger core is at the lower part of the starter due to its own weight before power on, and the mercury does not contact the two electrodes, so the terminals ① and ② are not conductive. When the compressor is powered on, that is, the current coils ③ and ④ are energized, the plunger iron core lifts the mercury simultaneously under the action of electromagnetic force, so that the two electrodes are in contact with the mercury to conduct, and the start winding is connected to the power supply, finally the machine starts. At the same time, the lifted mercury flows out from the hole at the bottom of the plunger core, the mercury level drops, the two electrodes are disconnected again, and the compressor enters normal operation.
3.2 Potential Start Relays
Potential start relay is the most commonly used starting relay in household air conditioners. It is composed of coil, iron core, movable iron sheet, movable contact, fixed contacts and lead terminals. 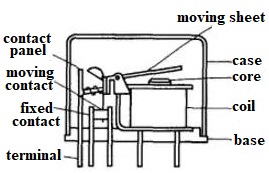