The Bangladesh top order collapsed timidly, for the second time in the match, leaving New Zealand on the verge of victory at the end of the fourth day in Hamilton. A brilliant spell from Daniel Vettori was supported well by his spinning parter Jeetan Patel, and reduced the tourists to 88 for 5, still 316 runs away from an unlikely victory. The spin pair bowled consecutive wicket-maidens shortly before the close of play, taking the game well and truly away from Bangladesh.

Tamim Iqbal gave the visitors the opening, slogging to long off where a back-pedalling Daryl Tuffey took an important to catch. The remainder of the top order folded feebly under pressure, with New Zealand hot on attack in the final session.

Earlier, a sedate second innings from New Zealand saw the hosts ambling to 228 for 5 at tea before a four over post-break burst from Brendon McCullum brought about the declaration, with his side 403 runs in the clear. It capped a strong finish to the innings that was initially tied down by Shafiul Islam and Shahadat Hossain, who choked the overnight pair of Peter Ingram and Tim McIntosh at the start of the day. Both batsmen seemed nervy under the pressure exerted, which eventually brought about the debutant's dismissal, run out, backing up too far for an attritional 13. 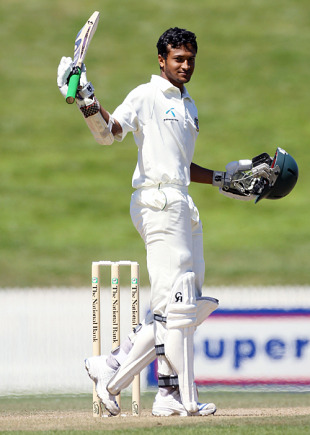 Shakib Al Hasan employed sweepers and a fine leg for most of the day, intent on keeping boundaries to a bare minimum. He was largely successful, with only nine fours coming in the morning session, a rare sedate passage of play that stood out in a match that had until then featured an assortment of stunning strokeplay.

Runs were easier to come by after lunch for the hosts, but only marginally so. Tim McIntosh and Martin Guptill exploited the gaps in the infield to keep the scoreboard ticking, occasionally springing to life to loft bad deliveries for six.

Bangladesh had a mixed day in the field, effecting two run outs and defending the boundaries energetically, but were woeful with their catching, spilling two chances off McIntosh and one off Guptill who remained unbeaten. Guptill's knock summed up the afternoon quite nicely for New Zealand, with thirty-two singles, three twos and three sixes making up his 56. McCullum hustled a quick 19 after tea, taking New Zealand to 258 for 5 before Vettori called the innings to a close.

Tamim Iqbal played as he has for much of the tour, attacking without reservation. The opener was scintillating through the off side, stroking four consecutive boundaries in a Tim Southee over. Once again however, he was unable to kick on for the long haul, and holed out to mid on after hitting five fours and a six in a 30-run cameo.

Junaid Siddique followed soon after, bizarrely bowled by Chris Martin when the ball struck the glove to loop over the clueless batsman, onto the stumps. That had the visitors wobbling at 58 for 2, and the dismissals of Aftab Ahmed, Mohammed Ashraful and Imrul Kayes in quick succession left the hosts with little to do on the final day.