CSCPL is a leading supplier of Sodium Bromide solution

by Jalpa Chauhan Marketing Manager
Sodium bromide (NaBr) is a very popular alkali bromide which have the properties of both the dehydrate and anhydrous forms. Sodium bromide is useful in the formation of bromide and bromide mixtures by adding access of bromide to sodium hydroxide solutions. After the mixture is prepared, the products evaporate to a dry state and are again treated with carbon to produce bromide. Sodium bromide is chemically and thermally stable. Sodium bromide can be blended with other solutions of chlorides and bromides and is also useful for formations with calcium sensitivity. 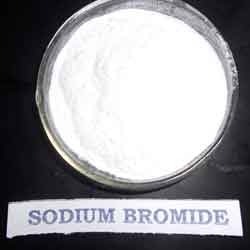 There are a number of applications of sodium bromide solution like it is used as a sedative in pharmaceutical sector, as a clear brine fluid in oil and gas wells as both, single-salt brine and multi-salt brine, as a disinfectant for swimming pools. The applications of sodium bromide are useful in an array of industries. It is used as a hypnotic agent, a sedative, and as an anticonvulsant. One of the most important application of sodium bromide is due to its high density; used as a heavy, clear brine fluid for completion and workover oil and gas drilling activities. Sodium Bromide solution, a salt is used alone or in a combination with sodium chloride or zinc bromide to form clear workaround and drilling fluids with densities of 8.4-12.5 lbs/gal. It is monovalent and is therefore one of the preferred salts (brines) for drilling into a reservoir. Moreover, it also eliminates the potential damage due to formation of precipitates such as carbonate, bicarbonate and sulfate.
Other uses of sodium bromide include controlling bacterial, fungal, and algal slimes in municipal wastewater and industrial wastewater treatment, in photographic processing, and as a chemical intermediate for producing various chemicals like bromides. Due to such various applications, global demand for sodium bromide in end-user industries is increasing.
Chemcon Speciality Chemicals.Pvt.Ltd , CSCPL: Leading producer of Sodium Bromide
The Asia Pacific region is projected to be the fastest growing market for sodium bromide in the next six years. India and China are the center point and the areas which have contributed the rise if the production of sodium bromide in the Asia-Pacific region. There are other countries like Africa, South America, USA, Europe, and the Middle-East that have also contributed to the rapid economic and industrial rise of the demand for sodium bromide.

In India, Chemcon is one of the leading producers of sodium bromide. We serve to provide our clients with high quality sodium bromide, powder and liquid form. We have a strong background of supplying sodium bromide to our partners, not only in India but worldwide. Our partners include the likes of Ranbaxy, Mylan, Sun Pharma, Lupin, Cipla, Hetero and Aurobindo to name a few.