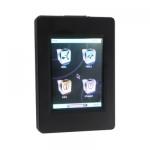 2) Same function as KESS V2. Handheld version.
Handheld version, no need PC. Directly connect it with your car to program the ECU. No need software installation. More easily to use.

3) Unlited tokens version.
It has the tokens reset button on the main unit. Just click this button and token will be charged.


The New Genius is the worlds first Touch & Map device which allows reading / programming the ECU in modern vehicles over OBD2.It is able to work without connection a computer during the critical phases of reading and writing of the ECU, ensuring the process is executed in complete safety. As a completely independent tool, the risks of working with a PC can be avoided, risks such as stalling, Windows crashes, power failure etc


The New Genius supports CAN-BUS, KWP and J1850 protocols and has communication modules available for the following vehicles: http://www.slideshare.net/obd2motor/supported-vehicle-list-of-hand-held-ktouch-ecu-programmer-upgrade-kess-v2-chip-tuning-tool

It is equipped with a sophisticated system for the recovery of the ECU should any problems occur during programming.

The New Genius is controlled through a system of icons from your TOUCH PANEL touchscreen, this makes it extremely easy to use. A standard 16 pin OBD cable is included and specific connectors to work on making diagnosis and special cables to do so through direct connection to the connector or plate ECU.

Easy to use thanks to its touch