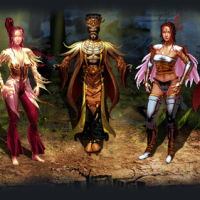 Game Introduction You must have played bundles of games before from different genres. You must be fascinated with...Read More

This group is the public group. Your request will be auto-approved.

You must have played bundles of games before from different genres. You
must be fascinated with their lovely graphics and amazing themes. You
must have thought about the intelligent minds behind those games. And
some of you must have fallen in love or got addicted with some games.
But now it is time to experience the brand new action thrilling package
of mass destruction of evil. Get ready to mesmerize your aesthetic
senses with the best of all games you have ever played yet. Lost Crown
is ready to hit the market and will swap all the players in it from
other MMORPGs . Lost Crown has been specifically designed by taking
under consideration all the aspects which have been ignored by other
game manufacturers previously. It is a complete package of fun,
amusement and leisure.

It is only Lost Crown, the first massively multiplayer online role
playing game which has all the wonderful features to
supplement your reflexes in terms of mental, visual and physical. Lost
Crown game is based on a story line which provides its players a
platform of practicing one to one combat, guild wars, team play, solo
quests and guild quests. While playing Lost Crown, a player has to think
deeply to find out a way to finish the quest, a player has to make some
plans or strategies to win wars against opponents and a player has to
be spontaneous at attack when killing monsters and evil bosses in the
game.

Lost Crown has a unique theme and a story line which gives exciting
experience of historical places and way of living. The combination of
imaginary monsters and characters with unique theme of story is quite
appreciable. The developers of the game have done a wonderful job by
depicting struggling people fighting with monsters and evil for the
survival of human race in the ancient fantasy world.

Lost Crown is a game with eye catching exotic and vibrant graphics in
which the details of landscapes, historical building, characters,
animals, monsters and non playable characters are very prominent. The
story of the game is based on ancient people and their way of living in a
fantasy world. People of ancient times are struggling for their
survival in hard time. The mankind is in danger due to the invasion of
evil from outer worlds. &nbsp;The tasks and quests provided in Lost Crown
makes it a perfect role playing game. It creates a sense of
responsibility in the person playing game and each and every action in
this game Lost Crown is purposeful. Not only an individual can play this
game, team of many players can join hands to complete quests and to
kill monsters and bosses. They can also share different items and
equipments necessary for performing different tasks. One of the most
exciting and best parts of the game Lost Crown is the guild wars.
Players can form a guild to have a fighting competition with each other.
They can make plans and strategies to defeat their opponent guild in
war. Not only can they engage in war with each other, there are many
amazing quests for the guilds in the game. Each member of the guild has
to perform specific duties to get the job done and to get reputation.
Player killing is another exciting part of the game Lost Crown. You can
kill other players while playing the game. If you kill other players
your PK points will rise and you will have to go to jail if you PK
points will exceed a certain limit. In jail a player has to spent time
to lower his PK points in order get out of the jail or he has to pay a
certain amount of gold. Lost Crown has a chat system which connects
people from different places. People get to know each other make friends
online. They form teams and guilds to perform different tasks and
quests in the game. Chatting is a source of amusement and social
networking in the game Lost Crown.

What makes a product different from its competitors? Thats right, its
uniqueness and innovative features are responsible give it a competitive
edge over its rivals. Although there are many amazing games available
in market but somehow they lack some features to make them perfect games
to play. But, Lost Crown is the one which has the entire feature any
player can dream of to have in one. &nbsp;Extreme exotic graphics,
magnificent characters, multiple attack skills with loads of variety,
splendid landscapes, mind blowing sets of quests, wonderful
communication system for players, bone crunching solo and guild wars and
a combo of love and battle. And above all this, Lost Crown has a
facility to provide 24 hours customer support to its players so that
they cannot miss even a bit of entertainment from this marvelous online
game. Due to all these differentiated features, Lost Crown surely
resplendent among its rivals.

Lesson in the Game:

The message in games usually relates with guiding, training, condemning
or encouraging the person playing them. Same has been done in Lost
Crown. It has been depicted in Lost Crown that how ancient people used
to pass their lives in such a miserable condition in which evil has
invaded the humanity. The element of love for each other in humans has
been promoted. The purpose of the story line used in Lost Crown is to
encourage the players to develop a habit of helping each other and to
love the people associated with them. Not only the matter of love is
highlighted, another encouragement related to make one mentally stronger
to face hardships has also been promoted. It is worth to play Lost
Crown and to learn positive lessons given by the game.

2. First go to following link and make your account leave Promoter field as it is or you will not be able to register your account

6. login to you account your email address through which you have register your account is your User name.