Tamil Nadu is a state in southern India known for its extravagant temples, delectable food, and rich culture. Traditional clothing, which symbolises the cultural essence of this south Indian state, is an important aspect of Tamil Nadu's rich culture. Tamil Nadu dresses are made from a variety of materials such as cotton, chiffon, silk, crepe silk, organza, georgette, micro silk, and patola silk. Let's learn more about Tamil Nadu clothing. 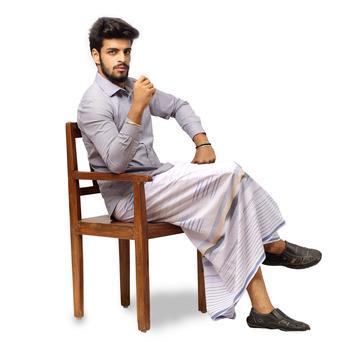 Sari is a very important piece of traditional women's clothing in Tamil Nadu. Cilappatikaram, a popular Tamil poem, depicts females wearing saris. Sari is a traditional Indian dress that women wear to work, temples, parties, and weddings. South Indian saris are well-known throughout India for their intricate zari work. Kancheepuram saris are particularly well-known for their exquisite style. A Kancheepuram sari differs greatly from a North Indian sari in colour, texture, and style. Saris are typically five to six yards in length.

Pavada is the dress that Brahmin girls wear before getting married. This half sari dress is made up of a full-length skirt, a short blouse, and a Davani shawl. It is a symbol of youth and beauty in Tamil girls.

Salwar Kameez is also popular among Tamil Nadu women these days. Salwar is a type of loose trouser worn with a long top called a Kurti or kameez.

Tamil men's traditional attire is as elegant as women's attire. In Tamil Nadu, the most common bottom-wear for men is cotton lungi. It encircles the waist and thighs. Handloom lungi is available in a variety of colours. It is also the traditional wedding attire for men. Cotton is commonly used to make this rectangular-shaped cloth. It is usually paired with a shirt or an Angavastra. Another important component of Tamil dressing is angavastram. It's a piece of cloth that wrapped around your shoulders. Angavastram was originally used as upper clothing, but it is now worn above the shirt.

The Shastras state that when performing the pooja on a daily basis, one should always wear a pavitra / fresh (clean and washed) cloth. And 'Dhoti' is one of the purest types of cloth. When performing puja, yajna, or attending religious ceremonies, a dhoti is the recommended garment. It is designed to be washed and dried on a daily basis so that it can be worn the next day. Because the word itself consists of 'Dho' (wash) + 'ti' (wear fresh next day).

When men stand with their feet together after wearing a dhoti, a shape resembling the letter 'W' is formed in the dhoti's downward direction. The inherent energy in the dhoti is continuously emitted upward through its centre point. As a result, it is subtly perceived that, just as Sri Lakshmi stands in the lotus, the person stands in the sheath of the inherent energy emitted by the dhoti. This upward energy in the dhoti is transmitted to the person wearing it, similar to the plume of smoke that forms after putting Dhoop (Black incense) on the live coals during puja, and a protective sheath forms around him. This energy spreads throughout the person's body. Negative energies are also less prevalent.

Men's and women's traditional attire in Tamil Nadu is incomplete without gold jewellery such as necklaces, chains, payals, bangles, maang-tika, and earrings. Tamilians adore gold and are known to have a large collection of gold jewellery. Apart from jewellery, women in Tamil Nadu enjoy wearing flower garlands known as Gajras to decorate their hair.

To finish the look, men apply Vibhuti along with sandal paste to their forehead, while women apply Kum-Kum to their hands, feet, and forehead.

Tamil Nadu's traditional dresses are known throughout the world for their grace and beauty. Jeans, T-shirts, shirts, skirts, and tops have all made their way into Tamil Nadu's dressing culture in the modern era. However, when it comes to festivals or celebrations, Tamilians still prefer to wear their traditional attire.