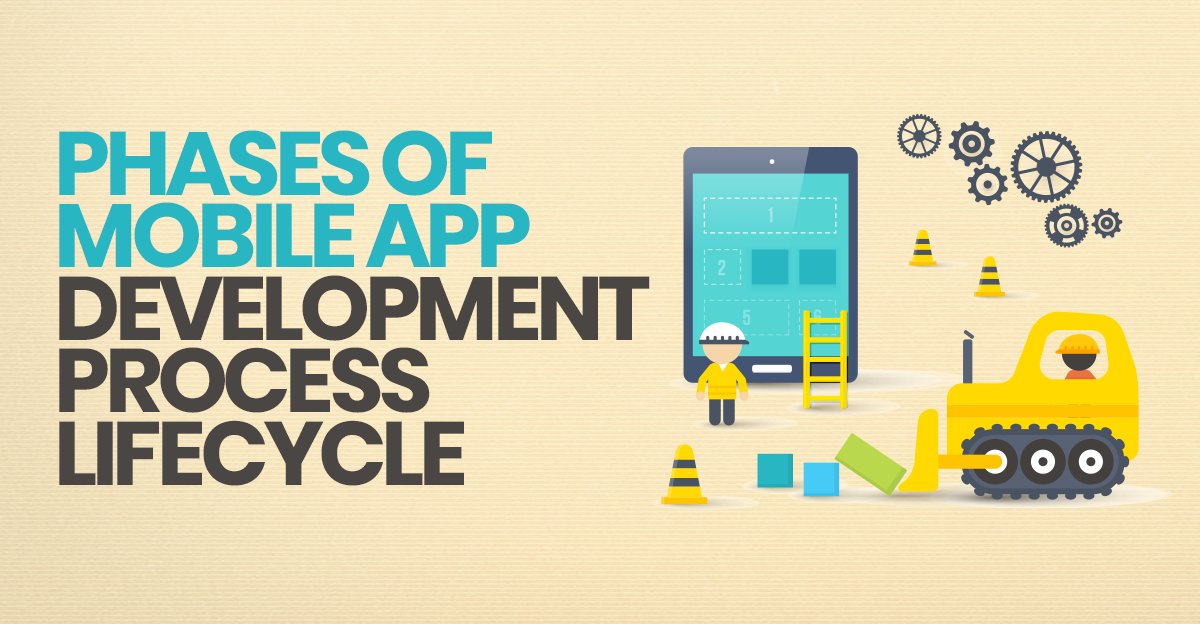 While some of us may think that app is all about coding! Coding alone can not take the app process to the stage of completion because there are crucial phases involved in the mobile app development. Most significant ones are as following:

● Idea development and research.
● Communicating ideas to a mobile app development company.
● Getting cost estimation from the developers.
● Development of an app prototype.
● Design of an app as well as back-end development.
● App launch in the marketplace as well as marketing.

The list of phases may seem to be quite burdensome and terrific in the start but an experienced mobile app developer can easily get over these phases in no time!
A worthy note: If you are looking to create an app for your online venture or just because people don’t prefer surfing through desktop apps anymore, whatever may be the reason, mobile apps are a must-have this day and age!

From solid foundation to marketplace marketing:

1. Idea Development, Research and Reference:
First and foremost, the research to find a company should start which can listen to your ideas and you should communicate all whatever is in your head about the app. You may start by giving reference to the representative to the company about the app you want to get a similar app.

For example: If you are in need of a food-reviewing and experience-sharing app, like Spooner, you can tell them about the features you would like in your app and what is your app aimed at?

Let’s talk more about Spooner. It is a visual guide to explore the best dishes and restaurants in your area. IT’s actually more about the dishes which will help you know about them better. Their photos, ratings and experience people had when they were in the restaurant and so on...

What all you can do in Spooner app? Just for a hint that you can communicate your basic features to your hired mobile app development company:

● You can search restaurants in Spooner. The app user gets to know about the user reviews, images and that too about thousands of restaurants! In a similar way, you have to give a hint to the company representative or the dedicated manager.

Like in Spooner, the users can recommend dishes, share their real experience and rate the dishes of the restaurant. Moreover, table reservation option is also there. Best deals and discounts about the meals and food at the restaurants can also be seen and made use of in this app.

As we mentioned all the features of this app and the things users can do using this app, a client should be very much capable of communicating each and every minute thing about the app so that the mobile app developers can let the client know about the feasibility of the functionalities!


2. Cost Estimation of an app:

After the ideas have been communicated to the developers, now comes the time to get an offer from the company along with the cost estimation of the app. It is definitely made on the basis of the app being referred by the client like we explained it using Spooner.

Accurate cost of app is not possible at this time because new features and other factors may lead to additional cost. One must keep the cost flexible. List of features play a role in deciding upon the cost of the app.


3. Deciding Upon the App Platform:

Once the discussion has taken aboard, it’s definitely time to discuss and finalize upon the target app platform you would like for your app. Whether its native or hybrid apps mostly used Android and iOS, you can think about the target of your app. You can get a native Android app and an iOS app simply based on the cost or target ! The moment you decide upon the platform of the app, you will certainly get a Fixed Price of the app after the project manager has completely understood your requirements.


4. UI Designing and Development of the App:
Okay, so now starts the main process, which is easier said than done.  App Logic is what is taken into consideration when the front-end as well as back-end development of the app begins. Integration of features like social media integration, the tability of the users to rate and review and share their experiences, calls for certain functionalities which is just a clue about the Spooner-like app we discussed above.

● Module Development for the app (Back-end):
A module is the basic building block of an app. When all the modules are built and integrated into an app, it shapes the real app building process. As many the features, so are the modules of the app which are integrated into the app in the back-end development process.

If you are not sure about the features, get a very basic built of the app, then get it tested and ask for feedback.

● UI Design of the app (Front-end):
Most probably, the best thing about designing of an app is front-end development. The UI of the app should be highly impressive and should lure the users of the app in the first go! Simple wireframes should be created in the first instance and later on details can be added. Screens of design will then be connected to each other to get the app viable for App marketplaces.


5. Mobile app Launch and Marketing:
It takes around 4-5 weeks for the app process to get on the completion mode. Then, it’s the big time to launch the app in the marketplace so that the process of marketing can get started.

●Cash on a unique selling point (USP) of your app and consider promoting that feature of the app as much as possible.

●A website (1 page or 2 page) for explaining about the app with a video or SEO-friendly content will let you reach more people. Even, a well-handled blog will do the trick and will help you reach more customers.