It was 7 P.M and our phone rang. The person speaking from the other side appeared extremely worried and helpless. His wife fell from stairs and was in the state of COMA at a local hospital in Guwahati. He was seeking an air ambulance in Guwahati, Assam. Doctors referred her to Kolkata for better treatment. Our advisers asked the person to calm down and provided all the information about the best possible transportation method available. He chose to avail chartered air ambulance service to dispatch his spouse to Kolkata. Soon our Ground ambulance team approached the local hospital and our doctor took the entire case summary of the patient. All the inputs received from the ground team were processed in the control room. In the meanwhile, our air ambulance team was asked to prepare for the flight and all the necessary aviation formalities were already initiated. It was a Bed to Bed transfer so the patient was picked up from a bed of the local hospital with all the life support systems installed in the ground ambulance and later shifted to the aircraft which was already prepared to takeoff.

We also allowed the patient’s spouse and one another member of the family to come along in the air ambulance. In the due course of flight patient cardiac monitor alarmed as the heartbeat of the patient was becoming weak. Thanks to our well-qualified Doctors and paramedics who controlled the situation in a professional way. A portable pacemaker helped to bring the patient’s heartbeat in a stable state. Upon reaching Kolkata once again our ground team was ready to pick up the patient and the same was done with ease. Later the patient was shifted to a well-known hospital in Kolkata where she was treated for several months. Last week we were happily informed by the patient’s spouse that his wife recovered from COMA and is gaining her health. It was not only good news for him but also a great success for us being an air ambulance service provider in Guwahati, Assam to save a life. 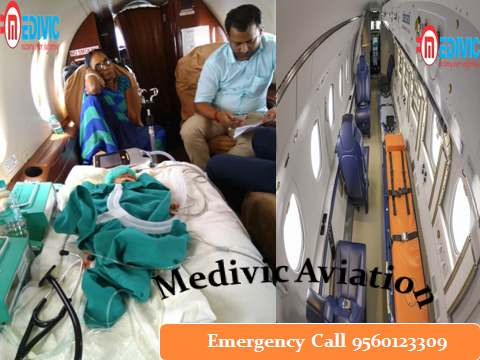