iOS Interview Questions for Fresher and Experienced in 2019 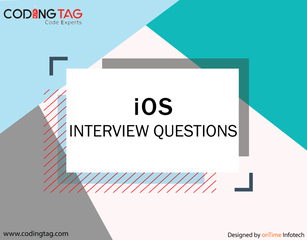 iOS development has been emerging as one of the preferable career options for fresher. An ample number of businesses have been orienting the iOS development domain to their services, in order to gain more productivity. If you are also looking to become an iOS developer, then you are on the correct platform. We have prepared a list of iOS Interview Questions which will help you learn the concept of iOS and prepare for the interview.

iOS can be defined as the mobile operating system which is used to develop applications for mobiles manufactured by Apple.

Four abstraction layers of iOS are:

·         Core Service layer including the services by the upper layer

·         Media Layer including audio, video and other graphics framework

·         Cocoa Touch Layer including all the iOS frameworks

The concurrency can be attained in iOS with the help of the following three approaches:

Suspended state in iOS is when the program is not executing but is stored in the memory. Further, when an application with a low memory condition is attained, the system eliminates the suspended state code to make space for the app.

5.      The ULKit classes are ought to be used by which application thread in iOS?

The ULKit classes are used only by the main thread of the application.

6.      What is termed as an active state in iOS development?

An active state in iOS development is the app which is consistently running in the foreground and is handling events.

ARC is known as the Automatic reference Counting and is used to count the reference to the objects in iOS programming.

So, that was a list of some of the interview questions asked during iOS interview. You can also visit HTML Interview Questions as HTML also possesses an important part of iOS development. Note that these questions are ideal for both fresher as well as experienced looking for iOS development career.