Browse Articles  »  Spirituality  »  How to Perform Umrah Step by Step?

How to Perform Umrah Step by Step?

How to Perform Umrah Step by Step?

Umrah is performed by the Muslims from all over the world at different times of a year. For this, Muslim visit Makkah Saudi Arabia to perform the Umrah and seek the blessings form Allah Almighty. 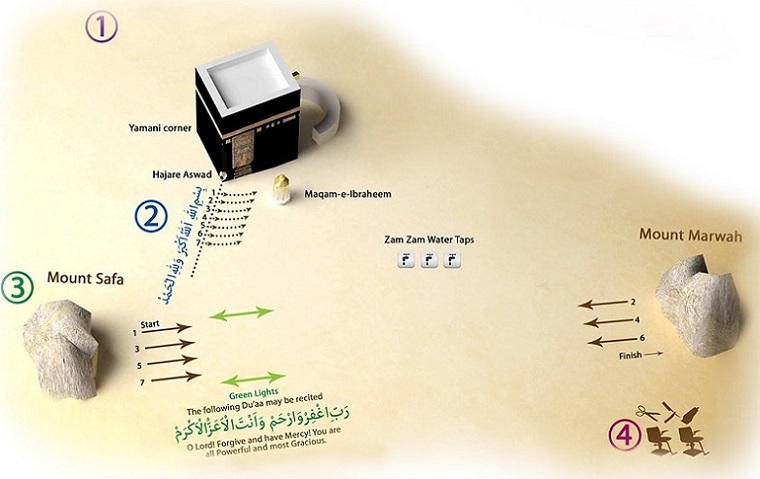 If you are also planning your visit to Makkah for Umrah, then you need to get the affordable Umrah packages from a registered travel agency. Selecting the right package will help you to complete your journey with ease and comfort.

Now, the next question in your mind will be, how to perform the Umrah? In the following blog, the detailed process of the Umrah is listed. Let starts with the rites of Umrah:

1. Ihram: It is important for the pilgrim to be in Ihram for Umrah before entering the Makkah. 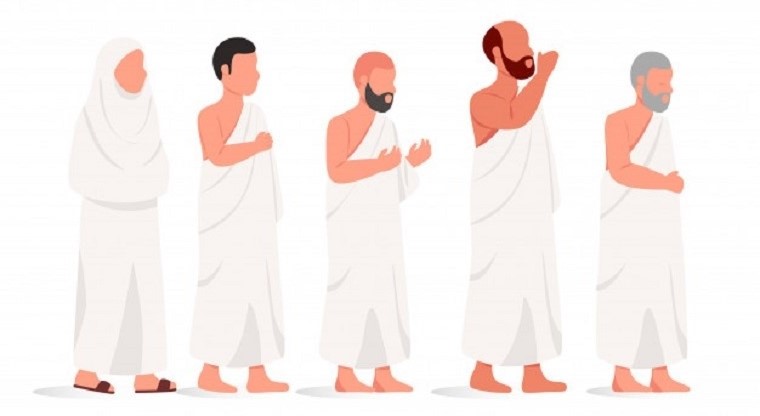 2. Entering Masjid al-Haram: While reciting the Talbiyah, enter Masjid al-Haram through Bab as-Salam (preferably) by placing your right foot first. Keep on supplicating to Allah and move towards Ka’bah.

3. First Sight: At the first sight of Ka’bah, keep your eyes at Baitullah and stand at one side. At this point, you should do the following:

The idea here is to praise and glorify your Creator before proclaiming Darud and supplications. Therefore, other than Allahu Akbar and La Ilaha Illallah, you may recite some other similar holy verses according to your desire.  Next, while saying Talbiyah, move forward for performing Tawaf of Ka’bah.

Tawaf means circling around the Holy Kaabah. Here the pilgrim has to move around Ka’bah seven times with extreme love and devotion.

1. Preparation: Pass the upper sheet of your Ihram from underneath the right arm and put it on your left shoulder. This act keeps your right shoulder naked and it is known as Iztaba. Ablutions (vudu) is important for tawaf. Reciting of Talbiyah is stopped when you will reach Hajar-e- Aswad, the starting point of tawaf.

2. Niyyah (Intention): You need to stand in front of Ka’bah facing Hajar-e-Aswad (the Black Stone) in a way that the whole Hajre-e-Aswad is on your right side. For this, you may get help from the black stripe on the floor. This stripe should be present on your right side.

3. Istilam: Next, moving towards the right, come in front of Hajar-e-Aswad and kiss it if possible or touch it with a stick and kiss the stick. If this is also not possible, then raise your hands to your ears keeping your open palms towards the Hajre-e-Aswad and say: " Bismillahi Allahu Akbar Wa Lilla Hil Hamd"

4. Start Tawaf: After Istilam, turn toward right and start your Tawaf in counter clockwise direction.

5-Ramal: For the first three circuits during Tawaf of Umrah and Tawaf of Arrival, men should move their shoulders and walk with quick short steps. This act is called Ramal and it is Sunnah. They will walk at a normal pace during the remaining four circuits.

Our beloved Prophet (peace be upon him) repeatedly recited this supplication. Your first circuit will be completed when you reach Hajar-e-Aswad.

7-Seven Circuits: After reaching Hajar-e-Aswad, start the second circuit by kissing it or pointing towards it just like you started the first circuit by coming in front of Hajar-e-Aswad. Raise your both hands raise to your ears with open palms towards it and say " Bismillahi Allahu Akbar Wa Lillah Hil Hamd”

Now kiss your both palms and drop your hands. After this go around Ka’bah just like before and similarly complete the seven circuits.

8-The End of Tawaf: At the end of seven circuits, do Istilam of Hajar-e- Aswad or point towards it eighth time, and this is called as Sunnat Mu’akidah. Do say, “Bismillahi Allahu Akbar Wa Lillah Hill Hamd"

9-Iztaba Finished: Now Iztaba is finished. You can cover your both shoulders with upper portion of the Ihram sheet. This rule does not apply to women.

10-Multazam: Now, the step is to come to Multazam. It is a place five or six feet in length present between the Hajar-e-Aswad and the door of Ka’bah. It is a highly sacred place where prayers are accepted. Due to the large crowd, reach Multazam. Press your chest and cheeks. While crying with devotion and with all humility seek Allah’s mercy, His blessings and ask whatever you wish. If you are not able to come close to Multazam, then just keep your face toward it and supplicate from a distance.

11-Maqam Ibrahim: After this, offer two rakahs of nafls behind and close to Maqam Ibrahim without covering your head. If it is a Zawal time when sajdah is not allowed, then you have to wait till the undesirable time is over and then offer prayers.

In your niyyah (intention), say that you are going to offer 2 rakahs of nafls wajib al- tawaf. Recite Qul ya ayya hal kafroon, during the first Rakah and Qulhu wallah in the second Rakah. After this, supplicate to Allah in Arabic or even in your own language. Ask Him whatever you want to wish and invoke His blessings.

If not possible to offer this obligatory prayer near Maqam Ibrahim, then it can be offered anywhere in Mataf or in Hatim or anywhere in Masjid al-Haram or even at any place in the Haram of Makkah.

12- Zamzam: Next, go to Zamzam well situated in the basement of the Haram about 200 feet from the Ka’bah’s door. There are separate portions available for men and women. Drink this water in standing position after saying Bismillah.

Now, it’s time for the second rite that is Saey. The literal meaning of Sa’ey is to run or to make an effort but as a Hajj and Umrah term, Sa’ey mean walking back and forth seven times between the hills of Safa and Marwah. These two hills are situated to the south and north of the Ka’bah respectively. Now, the place is having only signs of hills and the entire route between them is an enclosed long gallery.

Prophet Abraham left his wife Hazrat Hajra and his infant son Hazrat Ismael in the wilderness of Makkah on the command of Allah Almighty. The mother and son lived for five days on the food and water they brough with them. But when the water was completely finished. The mother ran seven times between the hills of Safa and Marwah in search of water for her son. During this, suddenly the fountain of Zamzam appear miraculously near the feet of Hazrat Ismael. Therefore, Sa’ey is included in the rites of Hajj and Umrah to commemorate this event of struggle and search.

1. Istilam: Before you start Sa’ey, do Istilam of Hajar-e-Aswad again the ninth time or point towards it and say "Bismillahi Allahu Akbar Wa Lillah Hil Hamad.” After this, proceed towards Safa. It is a Sunnah to be in the state of ablutions during the performance of Sa’ey.

2. Start of Sa’ey at the Safa. Climb the hill of Safa and make your intention (Niyyah) for Sa’ey.

If you are not able to remember this supplication, then you can recite Subhan Allah, Alhamdu Lillah, Allahu Akbar repeatedly and keep yourself moving.

At Marwah, when you are on the top of Marwah, praise Allah Almighty facing the Ka’bah and repeat the same supplications that were recited by you at Safa. Once the one trip is over, then second trip will be on Safa and third trip will be on Marwah.

5. End of Sa’ey: In the same way, the seventh trip will end at the Marwah. In all trips the men will run between the green pillars and the women will walk in a normal way.

6. Two Raka’at Nafl: If it is not an undesirable time, then do offer two Raka’ats of nafl in the Al-Haram.

3-Shaving or Clipping of Hair.

After the performance of Sa’ey, men should get their heads completely shaved or get their hair clipped equivalent to the length of the upper third of their finger or a little more. Both shaving and clipping are allowed for men, but shaving is preferable. Women are allowed to have a lock of their hair clipped. They are not allowed to completely shave their heads.

Congratulation! Now, your Umrah is completed. The restrictions of Ihram are finished. Now, you can wear your everyday clothes and start your normal routine. Be thankful to the Allah Almighty that he has provided you the opportunity for performing Umrah. After this, you should live the rest of your life according to the commands of your Allah Almighty.

You may perform Umrah whenever you want according to above procedure. And if you just want to perform a Nafl Tawaf, then you should be following the same procedure but in a Nafl Tawaf, there is no Ihram, no Ramal, no Iztaba and no Sa’ey.

This was a detailed information about the performance of Umrah. Planning to perform Umrah in 2020? To make your Umrah journey comfortable and tension-free, you should book cheap Umrah packages 2020. Get in touch with the expert travel agency in your area to grab the right deal according to your need and budget.