Browse Articles  »  Business  »  How can Artificial Intelligence and Disruptive...

How can Artificial Intelligence and Disruptive Technology facilitate coaching?

A blog by Gabriel Barnes

In this new age of remote working, businesses have had to adapt to significant changes which have affected them at all levels.

What is necessary, therefore, is to upskill workforces in order that they can deal effectively with the upheaval that this crisis has caused. In the future of work, coaching and mentoring must be democratised – no longer exclusive to a small pool of high-potential talent, but accessible to all, even the most junior of staff members. Organisations are currently looking for cost-effective ways of implementing this change. 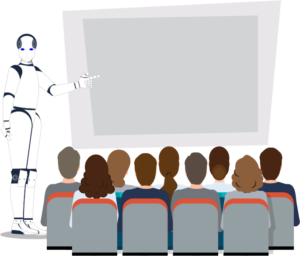 How has technology been used in coaching to date?

Following a period of rapid response to the sudden change to the status quo, businesses have begun to focus on new strategic priorities to allow coaching and mentoring to be done most effectively. Artificial Intelligence and digital solutions have played a role in this, as they do not necessitate huge levels of spending and are easy to implement across organisations. These solutions also facilitate self-directorship, meaning that they do not require significant levels of manpower.

Artificial Intelligence and digital solutions have also been used to facilitate coaching on building relationships and developing and maintaining emotional connections with people – at a time when doing so has been harder than ever.

Solutions based on Artificial Intelligence, such as these, have the potential and the capacity to consolidate data from a variety of sources (such as psychometric tests, performance statistics, and self-assessments) to produce the highest quality coaching and development programmes which are tailored precisely to the needs of the individual.

In the immediate future, it is predicted that these approaches to company-wide coaching will become even more finely tuned, with smaller, more regular interventions aimed at larger groups of people. Digital solutions will be increasingly employed to upskill operational workers to be able to manage the anticipated virtualisation of business and supply chains and workplace digital disruption. Meanwhile, coaching at the executive level is not likely to be completely replaced with Artificial Intelligence, but certain tools will become more prominent as enablers of top-of-house mentoring.

The future of AI in coaching

Whilst coaching has in the past been primarily an expensive face-to-face activity, as we have seen, enhanced in some cases by certain digital solutions, it is predicted that Artificial Intelligence will make even greater inroads into the domain of in-house mentoring. Technology such as augmented reality and two-way bot communication, which allows for intelligent interactions between person and machine, will become prevalent. This increase will have a great facilitating effect on coaching in a variety of ways.

We work with companies at early stages to ensure