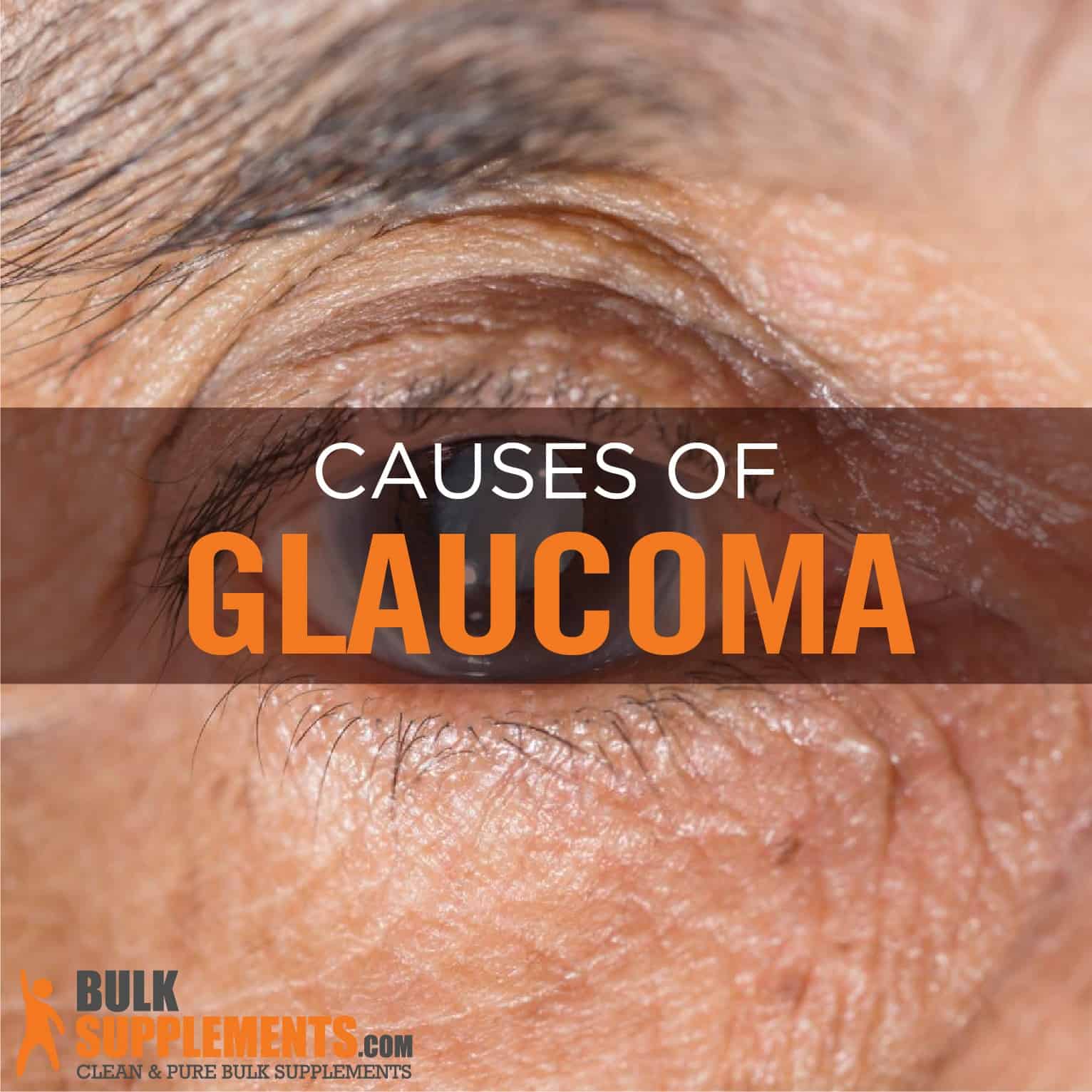 Glaucoma is a term used for a variety of eye conditions that cause damage to the optic nerve. In most cases, it leads to increased fluid buildup behind the eyes, which puts pressure on the optic nerve.

Since glaucoma causes damage to the optic nerve, vision loss from the condition is permanent. However, there are a number of ways to treat glaucoma and prevent further damage to the eyes.

Medical eye drops and surgery can help drain fluid from the eyes, reducing pressure and preventing more damage to the optic nerve.

Lifestyle interventions, such as a diet rich in leafy greens and plenty of exercise, may also reduce the severity of glaucoma symptoms.

Since there are a number of different types of glaucoma, symptoms will vary depending on the kind you have.

The most common form, open-angle glaucoma is often hard to detect during early stages. It usually builds up slowly, so you may not notice any obvious physical symptoms until your vision begins to be affected.

In addition to vision loss, many people with open-angle glaucoma experience blind spots in their peripheral vision due to damage to the optic nerve.

Close-angle glaucoma is often easier to diagnose than open-angle glaucoma, with more noticeable side effects during the early stages of the condition. It is often associated with headaches and eye pain, as pressure begins to build up as fluids accumulate in the eye.

It can be difficult to detect normal-tension glaucoma, as it often presents with fewer symptoms. Some people may start to get migraines. Peripheral vision loss is often seen in severe cases. In some serious cases, people may experience optic nerve hemorrhages.

Congenital glaucoma usually causes many notable side effects, which is why the condition is often diagnosed soon after birth. Symptoms include unusually large eyes, excessive tearing, cloudy eyes and light sensitivity.

Glaucoma is a broad class of eye conditions, with a number of different causes. In all of the different kinds, the optic nerve is damaged, which can lead to vision problems and blindness.

Although glaucoma can be caused by a wide range of factors, one of the most common causes is oxidative stress.

Studies have shown that oxidative stress in the eyes of people with glaucoma is much higher than in healthy people. Long term oxidative stress damages the cells in the optic nerve, causing vision loss.

In the case of open-angle glaucoma, you have a healthy iris and cornea. However, the drainage canals in your eyes have become blocked, preventing fluids from circulating. This can cause pressure to build up in the eyes, leading to damage to the optic nerve.

Open-angle glaucoma is by far the most common type of glaucoma. It’s the leading cause of irreversible vision problems and blindness. Because it’s so common, many people may not realize they have the condition until it is serious.

In angle-closure glaucoma, the drainage tubes in the eye are blocked by the iris. Since the tubes are blocked, fluids cannot circulate around the eyes, leading to fluid and pressure buildup.

There are some people who have narrow drainage angles, which puts them at an increased risk for this type of glaucoma.

In normal-tension glaucoma, the optic nerve is damaged without increased eye pressure. The cause of the condition is still not well understood.

It appears that people with this type of glaucoma have optic nerves that are more sensitive to damage. Even normal to low eye pressure can put them at risk for nerve damage.

This is the rarest form of glaucoma. It’s an inherited condition that is almost always diagnosed early in life. It is caused by the incomplete formation of drainage tubes in the eyes. This leads to increased fluid buildup, which can cause pressure to rise to dangerous levels.

Symptoms of congenital glaucoma are similar to other forms of the condition, including swollen eyes, clouded corneas and sensitivity to light.

The damage done by glaucoma cannot be reversed, although there are a number of ways to slow the progression of the condition.

Eye drops are usually the first line treatment used for glaucoma. These help reduce eye pressure by draining more fluids, as well as by preventing fluid buildup in the first place.

There are a number of different types of medicated eye drops used to treat glaucoma, and you may have to use a combination to lower pressure in the eyes.

Here are a few main types of medicated eye drops:

These eye drops increase the flow of fluids from your eye, which reduces pressure buildup and prevents damage to the optic nerve.

Like prostaglandins, beta blockers work to lower pressure in your eyes. They reduce the amount of fluids produced in the eyes, which can help prevent glaucoma from causing serious nerve damage.

In the event that eye drops don’t do enough to lower eye pressure, your doctor may recommend surgery. There are multiple different types of surgery that are used to treat glaucoma, including laser therapy.

Here are some of the common procedures:

Laser surgery is one of the safest procedures used to treat glaucoma. Your doctor uses a laser to open up channels that are blocked in your eye, which helps drain fluids and prevent pressure from building up.

Although safe and effective, laser therapy can only be used with certain types of glaucoma. It’s most commonly used for open angle glaucoma.

In some severe cases, your doctor may directly drain your eye to keep pressure from building up. This procedure is often necessary if eye drops are ineffective and your doctor is concerned that fluid buildup could damage your eyes.

To drain fluids, your doctor will insert a small shunt that removes excess fluids from your eye.

Minimally invasive surgery is a good option for people who want fewer side effects and a shorter recovery time than would be required with a drainage tube.

Diet will not completely treat glaucoma. However, there are studies that have shown that a healthy diet can lower the risk for glaucoma, and possibly prevent the condition from getting worse.

A diet rich in a variety of fruits and vegetables can give you the mix of vitamins needed to protect your eye health. Produce that has vitamins A and C are some of the most effective for preventing glaucoma.

Studies have shown that oxidative stress may be one of the main causes of optic nerve damage in people who have glaucoma. Foods and supplements that are rich in antioxidants may lower the risk of developing glaucoma and can slow the progress of the condition if you already have it.

Foods that are rich in antioxidants include spinach, kale, pomegranate, green tea and cranberries.

There is also some evidence that certain nutritional deficiencies could increase the risk for glaucoma and may make conditions worse.

You can get many of the vitamins you need from your diet, although taking supplements is a good way to increase the dose if you are severely deficient.

If you are worried that you may be deficient in certain vitamins, have a blood test done. This will make it easier to take the supplements that you need.

Exercise is an important part of a healthy lifestyle, and it may potentially lower the risk of developing glaucoma, as well as slowing the progression of the condition.

More exercise may potentially reduce oxidative stress, which lowers the risk of damage to the optic nerves.

Although supplements will not directly cure any case of glaucoma, they can protect your overall eye health. They may also reduce the symptoms of the condition, helping prevent damage to your eyes.

Vitamin A is important for protecting vision, as it helps prevent damage to the cornea, the outer layer of the eye. Low levels may increase the risk of blurred vision.

Vitamin E has been shown to protect the eyes from free radicals. Although more vitamin E won’t treat glaucoma, it may be able to reduce the amount of damage to the optic nerve.

Vitamin C is important for maintaining the vascular health of your eyes. It helps cells in the eye get enough blood flow, which can help keep your vision healthy as you age.

Research has shown that magnesium may play a role in the treatment of glaucoma. Increased levels of magnesium can increase blood flow to parts of the eye, reducing damage from the condition.

In addition, magnesium may protect certain types of cells in the eye, which could lower the risk of permanent damage from glaucoma.

Zinc is crucial for bringing vitamin A to the eyes, which helps prevent vision loss. Some studies have shown that low levels of zinc are associated with vision loss, although the link to glaucoma is still not clear.

Glaucoma is a medical term used to describe a variety of conditions where the optic nerve is damaged. It is the most common cause of irreversible vision loss around the world.

The most common type of glaucoma is open-angle glaucoma. It’s often hard to detect in early stages, and you may not know you have the condition until you develop vision loss.

Glaucoma damages the optic nerve, which means that any vision loss that comes from the condition is irreversible. However, there are treatments and lifestyle interventions that can slow the progression of the condition, as well as lower the risk of developing it in the first place.

Certain vitamin supplements, such as vitamins A, C and E may also lower the risk of developing glaucoma.