This happened to me, but it could happen to you as well. The reason why I am writing this article is to raise your awareness that true freedom of speech faces censorship while Facebook is also becoming a platform that encourages neo-nazi speech.
Yesterday morning, as I wanted to write a post on my Facebook , I suddenly noticed that my keyboard didn't work properly. I first thought of a problem with Windows, but a few minutes later, as I reiterated my attempt to write something, I received an invite from Facebook to log into my account again. My session had to be restarted. OK, here I am, logging into it, once again, and what do I see?
I am glancing at the following message: 'You recently posted something that violates Facebook policies, so you're temporarily blocked from using this feature. For more information, visit the Help Center.

To keep from getting blocked again, please make sure you've read and understand Facebook's Community Standards.
The block will be active for 23 hours more.
If you think you're seeing this by mistake, please let us know.'
To understand the full context of this Facebook block ( I have never been blocked on any other social media within decades. I am a respectful person with ethics who knows how to behave in real life-and who respects the netiquette as well.)
The following picture appeared on several Facebook pages, especially French Facebook pages denouncing antisemitism, like ' Balance ton antisémite', a page that is aimed at catching the authors of antisemitic speech. As you have probably noticed it, the author of this horrible picture is some French guy named Aurélien Hovaere.
For the ones who don't read French, what does the text say?
The text states:
For sale.
Very old Jewish pram  year 1946
working well
contact me via pm for more info
@what does this have to do with respect
In short, the 'pig' named Aurélien Hovaere is presenting you a picture of some kind of roaster oven, or barbecue and presents it as a 'pram for Jewish children', joking that one should burn Jewish children!
I don't know for the USA, but in France making such statements are against the law and their authors can be jailed for that.
In the original post, Aurélien Hovaere's address and phone number were there also.
So among other numerous comments of outraged people, I made the following comment:
'Another one. He left his address and phone number. Catch him.'
When I said ' Catch him', I was addressing to the Facebook Page ' Balance ton antisémite' whose people have helped sending such people to jail.
So Facebook is keeping illicit, neonazi content, but is censoring my harmless comment? I don't get it.
Usually people accept abusive blocks from Facebook, but here they messed with the wrong person. I will expose you Facebook, because you are turning into a platform that encourages nazis and that is giving negationnists a voice.
So while realizing that I had been blocked abusively, I went back to Facebook's last statement:
'If you think you're seeing this by mistake, please let us know.'
I clicked on the link that allowed my comment to be reexamined.
I thought to myself: 'Maybe they will realize that there was nothing wrong in my comment that stood against this antisemite.'
Late in the evening, Facebook is sending me the following message: 'We reexamined your post. Your photo goes against our community's standards.'
Your photo? Are the people working on Facebook blind? My name is Isabelle Esling.
The person who posted this picture is Aurélien Hovaere, a blatant antisemite!
Strangely, all of this occurs to me after I denounced several Facebook negationist profiles glorifying Hitler and  also after posting an article from the Guardian showing how two-faced Marc Zuckerberg is regarding the Holocaust. (Zuckerberg simply states that Holocaust deniers are 'making a mistakes'- and keeps allowing their accounts!)
So I came to the strange conclusion that either Facebook is controlled by extremists or Islamists, or by extremely low IQ people. I have no idea which of both options would be worse.
Beware, your freedom of speech on Facebook may be endangered for good.
Should I take the risk of new censorship, I will not keep my mouth shut.
© by Isabelle Esling 2018 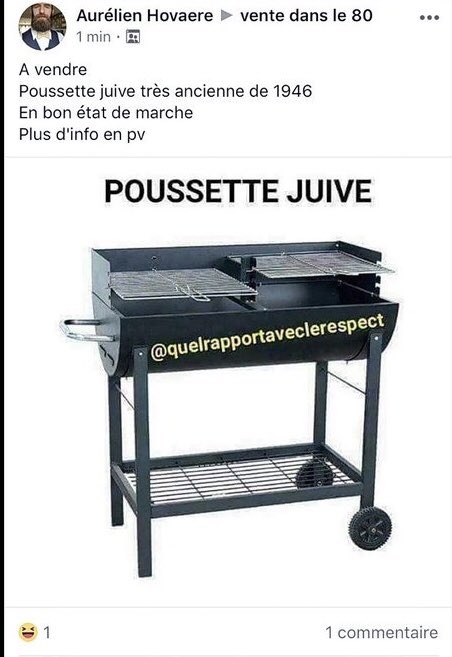